Crusaders kick off Super Rugby Aotearoa with victory over Highlanders

The Crusaders started the defence of their Super Rugby Aotearoa title with a hard-fought 26-13 victory over the Highlanders in Dunedin.

The reigning champions looked like they might run away with it after opening up an early 14-0 lead, but the Highlanders hit back to reduce the deficit to just one point before a late rally ultimately proved enough to see the Crusaders secure the win.

The match started in surprisingly feisty fashion with referee Ben O'Keeffe having to calm things down after Crusaders prop Joe Moody threw a flat hand into the face of a Highlanders player who was holding him back.

The Crusaders gave away the penalty but escaped the danger near their own tryline and launched a trademark counter-attack before winning a penalty up the field courtesy of a powerful scrum.

After some exciting to-and-fro from the two sides, the Highlanders gave away another scrum penalty to hand the Crusaders an attacking lineout up close. The visitors looked for all money they were going to score, but the Highlanders were able to escape when Bryn Hall threw a long pass out wide that was intercepted by Solomon Alaimalo.

The Crusaders continued to threaten and finally got the opening score on 12 minutes. A beautiful short ball from Sam Whitelock in the midfield saw hooker Codie Taylor burst clean through the line before charging all the way for the try.

The 'Saders made a hash of the restart to give the Highlanders a chance to hit back immediately, but the home side gave away a penalty for sealing off the ball.

The visitors went straight back on the attack, resulting in a second try for Bryn Hall. From the lineout, beautiful hands took the ball out wide where Sevu Reece opted to kick the ball back infield, picking out Hall who only had to jog over the line. Richie Mo'unga added the extras as the Crusaders opened up a 14-0 lead inside 20 minutes.

Looking to hit back, the Highlanders enjoyed a period of possession inside the Crusaders 22, and after a series of penalties that went against the away side, O'Keeffe finally lost his patience and sent Crusaders flanker Ethan Blackadder to the bin.

The Highlanders continued to assault the Crusaders line, and after several failed attempts to crack the visitors' defence, a bullet of a pass out wide from Aaron Smith finally allowed Shannon Frizell to crash over in the corner, though Mitch Hunt wasn't able to add the extras from near the touchline.

The Crusaders were looking exceptionally dangerous with ball in hand as the first half drew to a close but the Highlanders' scrambling defence was standing firm, and with only minutes to go it was the home side who hit back with a superb try.

Hunt threw a clever little short pass that saw Jona Nareki break the line before offloading to his fellow winger Connor Garden-Bachop for the score. Hunt couldn't convert, as an exciting first half finished 14-10 to the Crusaders.

The Highlanders were given a shot at goal at the start of the second half after Tony Brown was pinged for getting back on his feet without releasing the ball, and having missed his first two kicks, Hunt made no mistake with the third to bring the home side to within one.

The Highlanders gave away a silly penalty when Frizell came flying into the ruck and went off his feet, handing the Crusaders a dangerous field position. That was all the defending champions needed, as they recovered from a sloppy lineout to send the ball out wide where Reece pulled off a stunning diving finish near the touchline despite the attention of prop Siate Tokolahi.

The Highlanders had a golden opportunity to hit back when the Crusaders failed to collect an up-and-under inside their own territory, but Hunt opted for a crossfield kick when the ball should have been kept in hand and the visitors were let off the hook.

The home side also had a let-off midway through the half when Mo'unga missed a relatively straightforward penalty kick that would have put his side nine points clear.

Setting up an attacking lineout five metres out not long after, the Highlanders assaulted the Crusaders line before appearing to score following a little grubber kick through, but the referee thought he spotted a knock-on in the build-up, and after sending it upstairs, the TMO concurred.

The Highlanders still had a penalty advantage right in front, but after opting for a quick tap rather than take the three points, they simply couldn't crack the 'Saders sterling defence and the visitors were able to escape.

The match was decided seven minutes from time when the Crusaders opted to kick for touch rather than take the three points on offer and a textbook rolling maul from the lineout saw them power over the line, with reserve hooker Brodie McAlister coming up with the ball.

The match ended with a yellow card for Crusaders captain Scott Barrett after he obstructed a player off the ball during a Highlanders counter-attack. That gave the hosts a late attacking opportunity but Liam Squire couldn't hang on to a crossfield kick with the tryline beckoning as it finished 26-13 to the Crusaders. 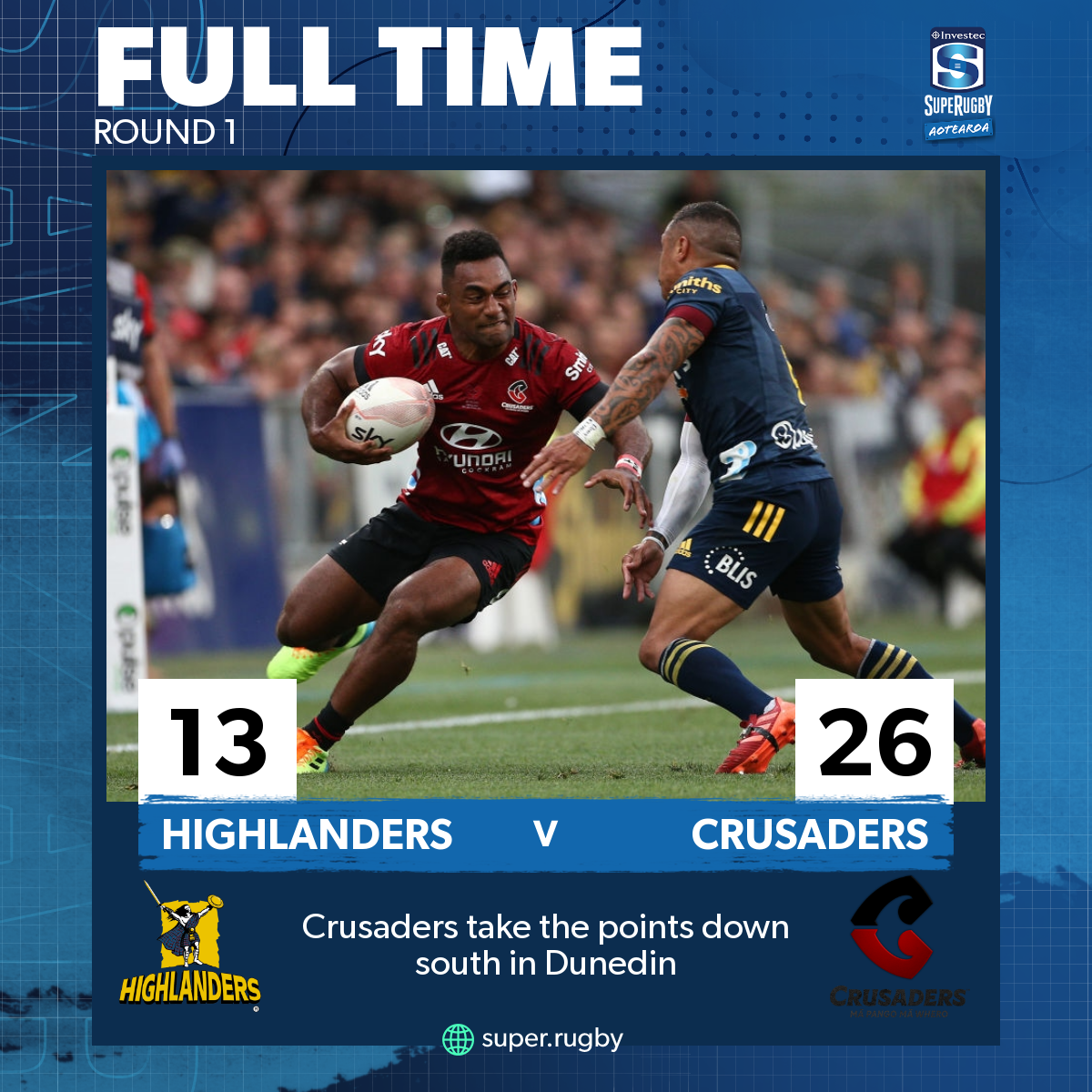