The Highlanders snatch victory over the Bulls in thriller

A last-gasp Lima Sopoaga penalty gave the Highlanders a dramatic 29-28 victory    over the Bulls in a Super Rugby thriller at Loftus Versfeld in Pretoria on Saturday.

Despite scoring four tries to the Highlanders' two, the Bulls lost the match as Sopoaga produced a kicking masterclass with a perfect seven from seven.

It was a great smash and grab performance from the Highlanders who only had 35 percent of the ball. They made 170 tackles and missed 24 while the Bulls only had to make close to 50.

The Bulls' scrum dominance resumed as normal, with Lizo Gqoboko filling the void left by Pierre Schoeman seamlessly, winning the man-of-the-match award in his first Super Rugby start. However, the Highlanders nullified the Bulls' driving maul excellently, which had previously been a key weapon for the Pretoria side. Tactically, the Bulls perhaps should have taken the three points at times.

As mentioned above the Bulls had the ascendancy in the first-half, enjoying 80 percent of the possession and territory in that period. Although they would have felt they should have had more tangible reward for their superiority.

The Highlanders, however, scored the game's first try against the run of play during a rare spell of possession as they sucked in the Bulls defence before full-back Fletcher Smith spotted the space in behind the Bulls defence and put a kick through which was successfully chased down by scrum-half Aaron Smith, who controlled the bouncing ball well with his feet before gathering and dotting down.

In the 23rd minute, the Bulls' pressure paid off when they were awarded a penalty try with the added bonus of Fletcher Smith receiving a yellow card. Jesse Kriel created the havoc with an awkward-bouncing grubber kick which bamboozled the aforementioned Smith, who was forced in to tackling Warrick Gelant without the ball, who surely would have scored.

Soon afterwards, a Highlanders' lineout set-piece move went horribly wrong with Pollard reading the premeditated move, intercepting with one hand before having the pace to run all the way. The Springbok fly-half converted his own try for a 14-7 lead.

Sopoaga cut the deficit to four with a penalty as the Bulls took a 14-10 lead into the interval. 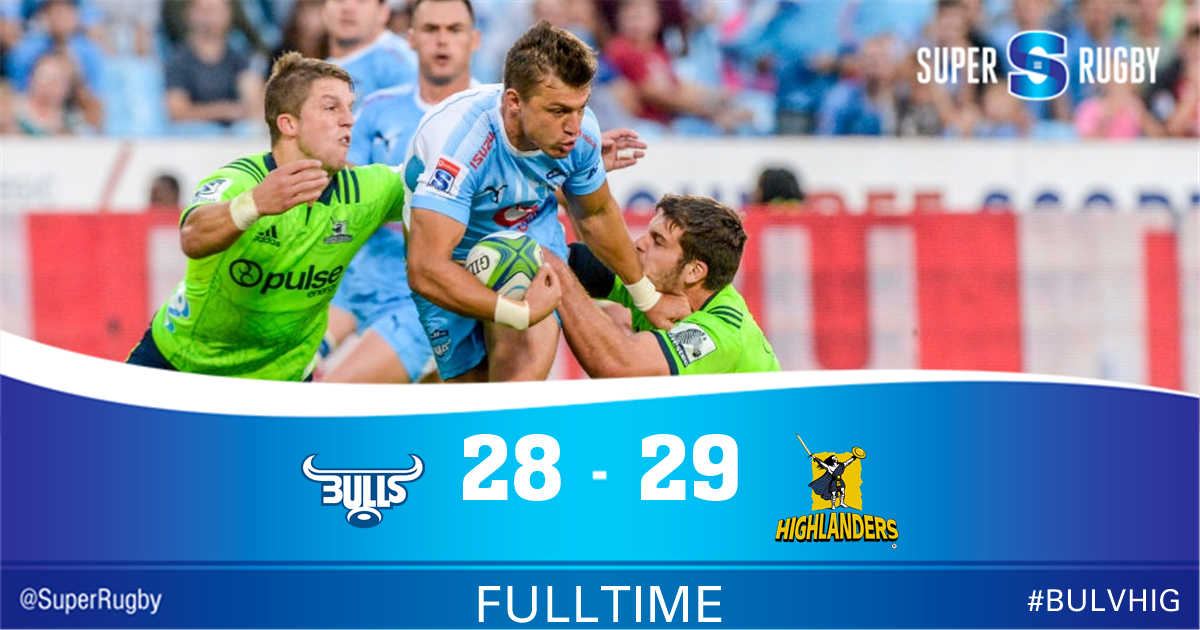 And within three minutes of the second half having resumed, the Highlanders retook the lead with a wonderful team try. The break was made down the right wing and Aaron Smith played in Fletcher Smith for the easy run-in to the line. Sopoaga converted for a 20-14 lead.

Sopoaga extended the lead to 23-14 with a 52nd penalty minute but the Bulls hit back five minutes later. Gqoboka made the mini-break, Jason Jenkins detached himsell from the ruck and went straight over to finish off a superb team try in which the home side showed great patience in the build-up. Pollard's conversion brought the home side within two at 23-21 down.

With a quarter of the tie to go, Sopoaga restored the five-point gap, nailing the penalty straight through the middle, after Gqoboka was dubiously penalised for what the referee deemed to be cleaning out from the side.

A probing kick in behind the Highlanders defence forced the turnover penalty after Sopoaga was forced to hold on to the ball close to his own try-line. The Bulls opted for the scrum and were rewarded when Pollard put Kriel into the space with the short ball, the Springbok centre scything through the Highlanders defence to deliver the knockout blow with four minutes left.

The game, however, had one last twist after substitute loose forward Nic de Jager was guilty of going offside. Sopoaga showed ice-cool composure to slot the penalty between the posts to maintain his perfect record with seven from seven for the evening and win the match for the Highlanders.