The Lions defeat the Bulls at Loftus

The Lions made it three wins out of three in Super Rugby as they eased past the Bulls in the second-half, winning 49-35 in Pretoria.

Leading by just seven points at 21-14 to the good at the break, two yellow cards for the Bulls then helped the Lions extend that gap and secure a comfortable bonus-point victory. It was yet another warning shot fired to their South African Conference rivals of their star quality.

The Bulls took the lead on six minutes when Cyle Brink was penalised for not supporting his body weight, Marnitz Boshoff adding the three.

But the Lions responded well and after turning down three points, a solid line-out drive led to prop Ryan Dreyer popping out with the ball in his grasp. Elton Jantjies kicked the extras and did the same four minutes later when Jacques van Rooyen also crossed from the line-out.

The Lions were now leading 14-3 before Bulls fly-half Boshoff hit back in the 23rd and 28th minute to reduce the gap to just five points.

Jantjies though helped repel the Bulls' fightback with a nice grubber through seeing lock Marvin Orie get to the ball first for a try. That made it 21-9 but credit to the Bulls who responded well through a kick of their own, Pollard's effort cross-field seeing Johnny Kotze dive over.

The Bulls returned to the field for the second 40 in perfect style when Pollard crossed after good chasing from the kick-off from Jesse Kriel. With Boshoff's extras suddenly it was a tied ball game at Loftus Versfeld, with the Bulls supporters buoyed by their side's start to the half.

But that was as good as it got in the second 40 for the Bulls, as the Lions hit back on 51 minutes through hooker Malcolm Marx. Then came a period that saw Bulls pair Conrad van Vuuren and Nic de Jager both sin-binned for separate offences. The Lions punished them.

De Jager's card came after he deliberately collapsed a maul and it was double punishment for the Bulls as a penalty try was also awarded.

The Lions then turned the screw with Sylvian Mahuza skinning Warrick Gelant on the right wing to make it 42-21 with Jantjies' conversion.

And the icing on the cake came nine minutes before time as a Marx throw to the tail found Warren Whiteley who put the ball back inside to Ross Cronje who finished well from 25 out. That made it 49-21 and put the result beyond doubt.

The Bulls did, to their credit, finish strongly with tries from replacement prop Lizo Gqoboka and a runaway score from wing Travis Ismaiel at least giving them something to build on going into next weekend's fixture, away to the Reds. 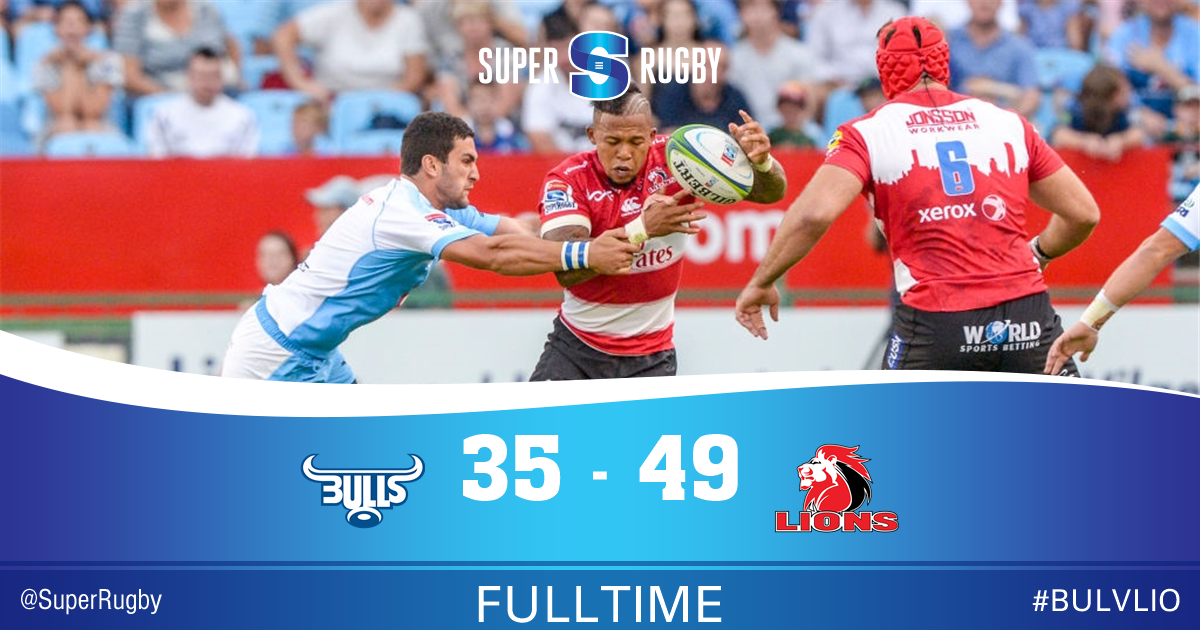