The Perfect Balance in Attack and Defence

Across the last decade of Super Rugby action there have been but a handful of players who have carried their team’s workload in both attack and defence...

Super Rugby has seen plenty of players pick up the slack over the last decade. Some do so by moving their team up the field with incessant carries, others do so by taking the bulk of the defensive responsibility upon their old shoulders and some further do so with their organisation. Few have had the determination and ability to spread their industrious ethos across both offensive a nd defensive facets of the game.

Indeed, across the last decade of Super Rugby action there have been but a handful of players who have carried their team’s workload in both attack and defence. Only six players in that period have managed to make 15+ carries and 15+ tackles in a game on more than one occasion, and none have done so more than thrice.

Of the 27 times in the last 10 seasons that a player has managed this feat in a game, Matt Hodgson (3 times) boasts the most of them. The Western Force flanker did so once in each the 2012, 2014, and 2016 campaigns, with every one of the three instances happening on home turf. The Force lost each of those games. 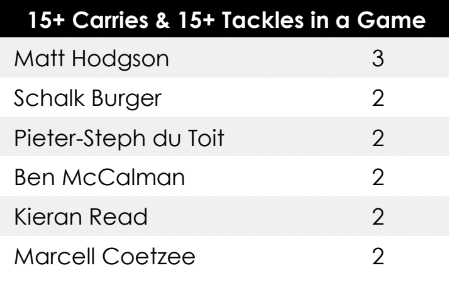 Hodgson’s contribution means that Western Force players have managed to reach 15+ tackles and carries in a single game on six occasions in the last 10 years – more than any other team – but it’s the Jaguares’ who’ve been the most recent club to showcase their effective wares.

Both of the last two times that a player has made 15+ carries and tackles in a game in Super Rugby have been for the Jaguares, with Pablo Matera (Rd 19, 2019 v Chiefs) and Marcos Kremer (Rd 2, 2020 v Hurricanes) the most recent instances.

In fact, they’ve gone one further for their club with both players also dotting down for a try in those industrious performances. Pablo Matera’s performance against the Chiefs in Round 19 last season came at a critical juncture for the Jaguares as they battled for the best position in the post-season. Matera’s supreme performance was the culmination of an impressive season for the Argentine forward, who finished the game with properly impressive numbers.

The decade’s most tireless performance belongs to none other than David Pocock, however. He may have only managed to make 15+ carries and tackles in a game once in the span, but he certainly went above and beyond in doing so. 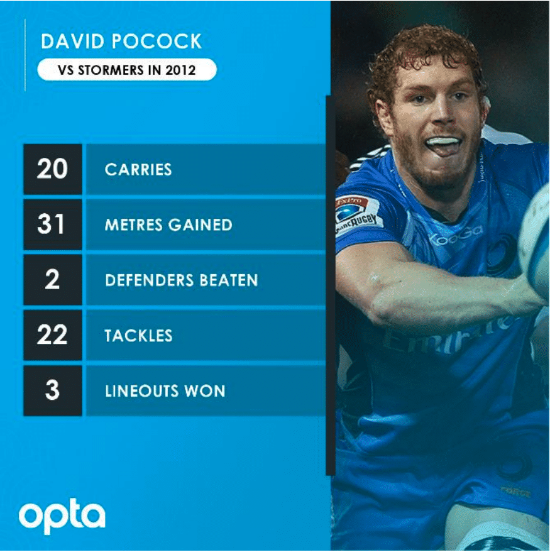 During the Western Force’s 17-3 defeat to the Stormers in April 2012, David Pocock become the only player in the last decade to make 20+ carries and 20+ tackles in a single Super Rugby game. Pocock was everywhere across the full 80 minutes for the Force, also managing to beat two defenders, win three lineouts and make one kick in general play. Experienced on both the domestic and international stage, the performance ranks among Pocock’s most determined in his professional rugby career.