The Unsung Heroes and Workhorses

In every pack a coach hopes he has his workhorse, the player with a high work ethic and an unending desire to be in the battle... who are they in Super Rugby AU?

There is a special place in most teams for a player who bases their rugby worth on their work ethic and it’s been a cornerstone of successful teams in the past just as it has been already in a brief Super Rugby AU campaign.

There is a special place in most teams for a player who bases their rugby worth on their work ethic and it’s been a cornerstone of successful teams in the past just as it has been already in a brief Super Rugby AU campaign.

Four players have shown that they have got what it takes to be the rock around which their respective teams are built in Super Rugby AU, with a Queensland Reds’ double threat featuring highly.

Henry Stowers, Harry Wilson, Lukhan Salakaia-Loto and Lachlan Swinton are the only players to have made an average of 10 or more carries and 10 or more tackles per game in Super Rugby AU.

Western Force’s Henry Stowers’ efforts [pictured below] have been the most industrious of them all. No only is he one of just four players to qualify for the table above, but his 19 tackles per game are the most of any player in the competition – and more than four per game more than next-best Tevin Ferris (14.8). The icing on the cake is his respectable tackle success rate of 92% for the season thus far.

The Reds are the only team to boast two players with 10+ in both carries and tackles per game this season. Harry Wilson has burst into the spotlight with his workmanlike performances this season, and his average of 32.6 metres gained per game is the second-most of any forward in the campaign behind only Isi Naisarani (53.3m). 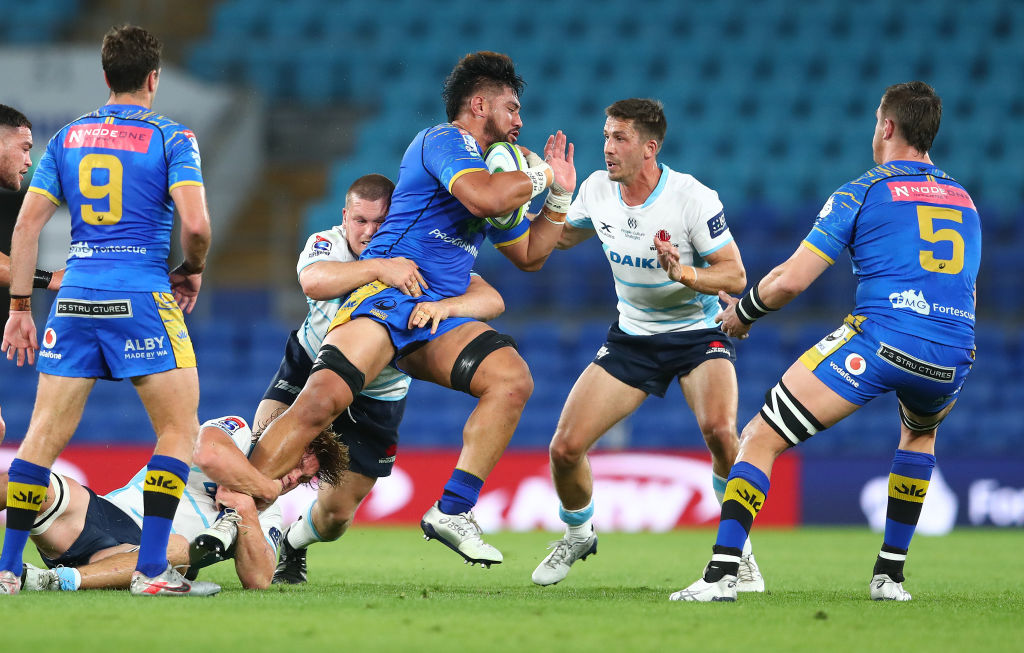 Wilson has been the king of breakout performances this season as well. There have been only four occasions of any player making 15+ carries and 15+ tackles in a game in Super Rugby AU and two of those lay at the feed of Harry Wilson. In fact, he managed to do so twice within the opening half of the campaign before any other player had done so even once.

Next to join him were NSW Waratahs’ stalwart Michael Hooper and the earlier-mentioned Henry Stowers of the Force. The pair both managed to make 15 carries each when their respective teams met in Round 7 of the competition, with Hooper also dishing up 15 tackles and Stowers running riot with a tally of 24 tackles.

These industrious performances are the groundwork upon which a successful campaign can be built, and each team will go a long way towards Super Rugby AU glory with one or more of these players in their ranks.