The Waratahs run away with the win against the Reds

The Waratahs moved to the top of the Australian Conference with a 37-16 bonus-point victory over the Reds at the Sydney Cricket Ground on Saturday afternoon.

After the Rebels were pipped by the Jaguares earlier in the day, the 'Tahs leapfrogged the Melbourne outfit in to first place with a crucial win here.

The New South Wales outfit have now won eight on the bounce against their Australian rivals, with the Queenslanders’ last triumph coming in 2013 when they overcame the ‘Tahs 14-12 at the ANZ Stadium.

Once again, Taqele Naiyaravoro was sensational, continuing his fine form, as he ran for over 150 metres for the second week in a row.

The Waratahs enjoyed quick, front-foot ball and played with great width, making ten offloads to the Reds' zero in the first half an hour.

They were also enjoying the majority of the possession (56 percent) but only had a 6-0 lead thanks to two Bernard Foley penalties to show for their dominance after 18 minutes.

Jono Lance slotted a 25th minute penalty to get the Reds on the board. Soon afterwards, they needlessly kicked the ball away to Kurtley Beale who sprung the counter-attack, before Michael Wells was freed on the overlap out on the right wing. Wells timed a brilliant right-to-left inside pass perfectly for Jake Gordon, who had the pace to make it the thirty or so metres to the line. Foley added the extras as the home side extended the lead to 13-3.

James Tuttle's penalty narrowed the gap to seven points at 13-6 before shortly referee Angus Gardner blew his whistle to signal the half-time break.

The Reds had come back in to the game in the last twenty minutes of the first half, reversing the possession statistics in their favour. They contined to control proceedings after the break but, like the 'Tahs at the beginning of the game, only had a 45th minute Tuttle penalty for their efforts. 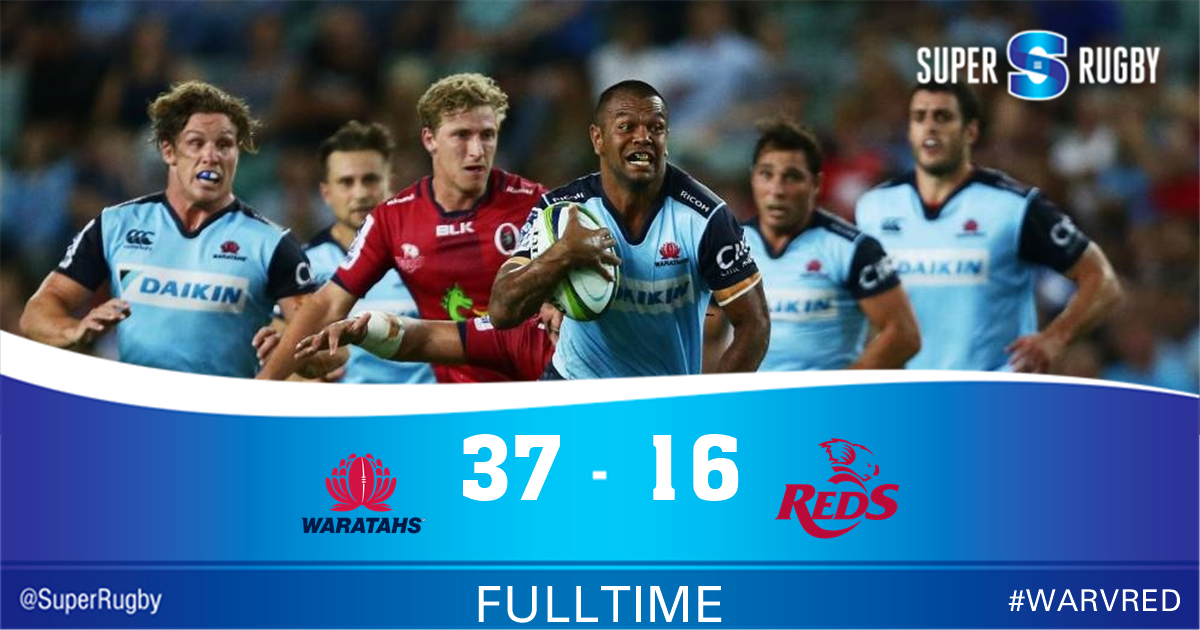 They were punished when against the run of play, Naiyaravoro intercepted Jono Lance's dozey pass three minutes after the interval to beat Reds full-back Aidan Tou in a two-man race for the line.

In the 59th minute, it was time for the Reds to also score an intercept try, Filipo Daugunu pouncing on Bernard Foley's unecessary pass to go all the way and over. Lance's conversion cut the deficit to seven  at 23-16 with the Reds well and truly back in it with a quarter to go.

Ten minutes later and with ten minutes to go, Naiyaravoro grabbed his brace, with a superb close-range finish after the Waratahs had got close through a dozen of well-structured phases. Foley maintained his perfect record for the evening with the conversion to stretch the lead to 30-16.

The Waratahs finished with a flourish when front-row replacement Harry Johnson-Holmes went over with the pick and drive to give the Waratahs a deserved bonus-point.