Try and penalty for Hodgson in Force win

Western Force gave Matt Hodgson a victorious send-off as they thumped the Waratahs, winning 40-11 to finish second in Australia's Conference.

With their Super Rugby future still unclear, this was a hugely spirited showing from the Perth franchise as they outclassed a poor 'Tahs outfit.

In an emotional occasion for a number of reasons, two being Hodgson's final game for the Force and the other being possibly the franchise's last outing in Super Rugby, the home side were certainly fired up to at least finish their season on a positive note and performed admirably.

They led 26-6 at the break thanks to tries from Alex Newsome, Tatafu Polota-Nau, Marcel Brache and Jono Lance as the 'Tahs looked sluggish.

It took the Force less than a minute to cross when wing Newsome raced over after he collected a good offload, with Peter Grant making it 7-0.

Bernard Foley did slot a penalty on six minutes but when scrum-half Jake Gordon was carded for an offside soon after, they were in trouble.

Polota-Nau's pushover score moved the Force 14-3 up before they lost Grant to a failed concussion test, with Lance coming on at number 10.

And despite a Foley penalty just before the half hour reducing the lead, the Force showed their class late in the half with a further try from Brache, from a Dane Haylett-Petty kick through, moving them 19-6 up. They added a fourth score too late on with a breakout from Lance.

20 points in front the Force were dominating in front of their soaked fans and they made it 31-6 seven minutes after the interval, with a popular try for Hodgson seeing him dot down a loose ball over the line. Lance couldn't add the extras but at this point the home side were cruising.

Lance made no mistake on 59 minutes though from in front as the Waratahs' woes continued, in truth they were showing no signs of improving. 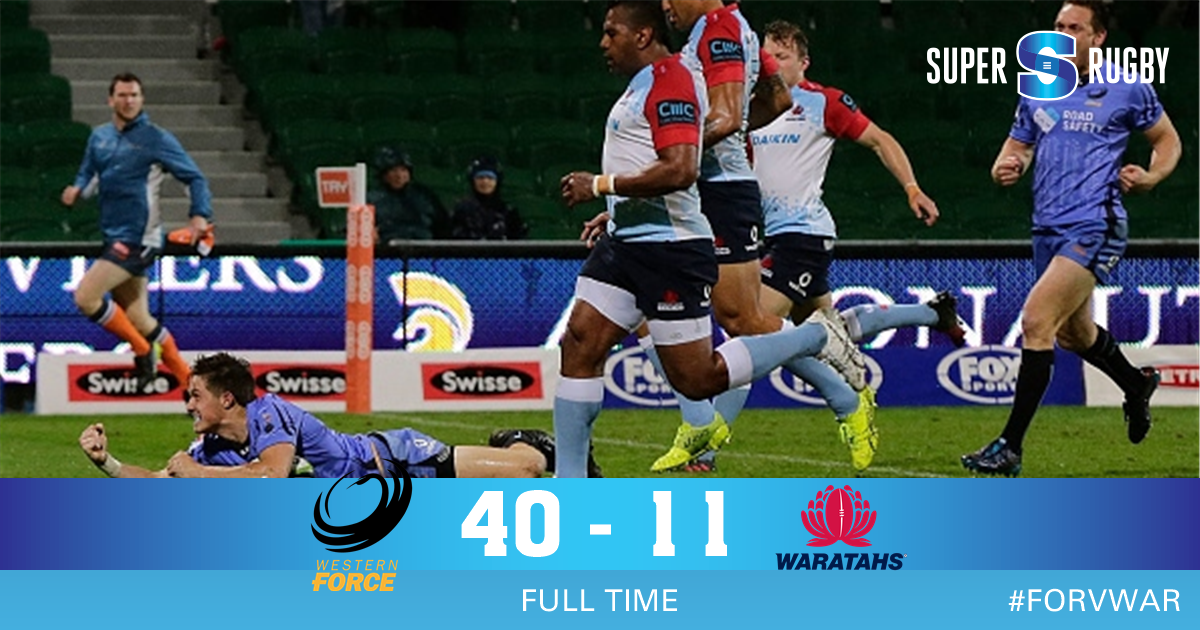 At this point the Force weren't concerned about adding further tries to their tally and instead opted to build their lead through kicks as Lance again stepped up on 70 minutes to make it 37-6. That didn't upset their fans though as they cheered every point from their charges.

The Waratahs finally managed to post their own try though soon after with a well worked lineout move seeing Hugh Roach go over, but it did little to paper over what was a dismal performance from the away side. The Force, in contrast, can hold their heads high after a fine win which was ended in perfect style when Hodgson stepped up to kick a late penalty.