The Waratahs continued with their impressive form against the Sunwolves when they thrashed the Tokyo-based side 77-25 in Sydney.

This was the Waratahs’ third win by more than 50 points against the Sunwolves in as many matches. The triumph means that Daryl Gibson’s side have booked their place in the knockout stage with a round still to play and they will finish at the top of the Australian Conference.

As the scoreline suggests, the Waratahs were worthy winners as the outscored the Sunwolves by 12 tries to three although the complexion of this match changed just before half-time when the visitors were reduced to 14 men after Semisi Masirewa was red carded for a tip-tackle on Bernard Foley.

The Sunwolves opened the scoring in the 10th minute courtesy of a Hayden Parker penalty – his 36th successive place-kick which is a new Super Rugby record – but the Waratahs’ response was immediate as just a minute later Sekope Kepu crossed for the opening try.

Foley slotted the conversion which gave the Waratahs a 7-3 lead before Parker reduced the deficit to a point when he added his second penalty in the 20th minute.

Two minutes later, the Sunwolves regained the lead when Foley failed to deal with a kick from Parker midway between the halfway line and the Waratahs’ 22. Akihito Yamada pounced on Foley’s mistake and gathered the ball from under the fly-half’s nose before racing away to score his side’s first try.

The home side struck back in the 25th minute when Israel Folau broke through the Sunwolves defence on his way over the try-line but this game’s topsy-turvy nature continued when Michael Leitch broke through a tackle from Ned Hanigan before dotting down.

That gave the visitors an 18-12 lead but the Waratahs responded with a well-taken try from Kurtley Beale in the 34th minute after good work from Sekope Kepu in the build-up and Foley’s conversion gave the hosts a narrow one-point lead.

Shortly before half-time, Folau crossed for his second try, after gathering a pass from Foley, who took that dangerous hit from Masirewa which resulted in the wing’s red card.

With a man down, the writing was on the wall for the Sunwolves and after a 42n minute penalty from Foley, the Waratahs hammered home their dominance with further tries from Hanigan, Nick Phipps and Taqele Naiyaravoro – the latter one was a momentous one for the burly wing as it was his 13th try of the campaign which is a Waratahs record for a season.

Despite trailing by more than 20 points, the Sunwolves did not surrender and in the 55th minute Yamada rounded Folau with brilliant footwork before crossing for his second try.

The Waratahs soon regained the initiative, however, and on the hour-mark Curtis Rona rounded off in the right-hand corner before Michael Wells scored their ninth try in the 65th minute.

That knocked the wind out of the Sunwolves’ sails and things went from bad to worse when Fumiaki Tanaka was yellow carded in the 70th minute for a dangerous tackle on Jake Gordon.

With a two-man advantage, the Waratahs controlled the game's closing stages and were rewarded with further tries from Naiyaravoro and Alex Newsome (2) which sealed an emphatic win. 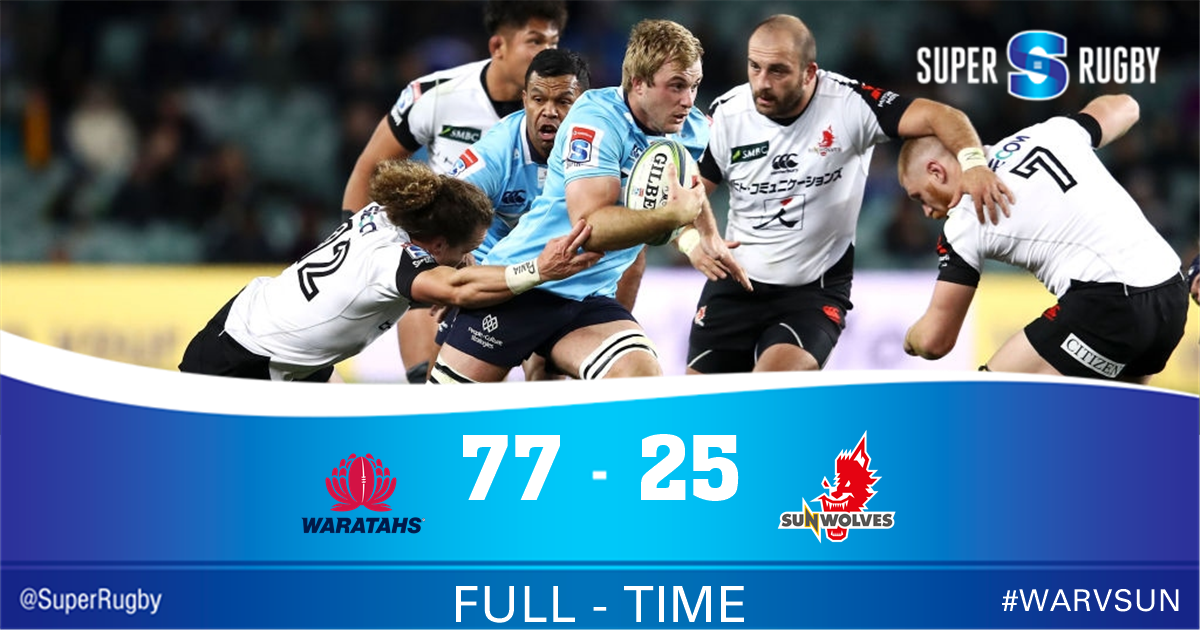