The Chiefs ran in six unanswered tries against the Waratahs in the second half to turn what had been a competitive affair into a one-sided 51-14 victory.

After an evenly matched first half in Wollongong, the Kiwi visitors came out all guns blazing after the break to take complete control of the match and coast to an emphatic victory.

An early penalty for the Chiefs allowed Aaron Cruden to squeeze one through the uprights and put his side in front, and 3-0 soon became 6-0 when the Waratahs gave away another penalty on attack inside their 22 a few minutes later.

Cruden was given another shot at goal in the 16th minute after Angus Bell failed to roll away in the tackle, but the flyhalf missed from right in front to let the home side off the hook.

The Tahs continued to be their own worst enemies, giving away penalty after penalty, and the pressure finally told when Shaun Stevenson crossed for the opening try midway through the half. It was a brilliant backline move from a lineout on the halfway line that resulted in the score, with Cruden heavily involved on three occasions before handing it to Stevenson, who finished in the corner.

That try seemed to light a fire under the Waratahs, who responded with their opening try less than five minutes later courtesy of captain Kurtley Beale. After opting to set up an attacking lineout rather than kick at goal following a penalty at the ruck, Beale collected a pass and ran a fantastic line to carve through the Chiefs defence and score. Will Harrison nailed the conversion to bring the hosts back to within six points.

The Tahs were looking much better now and took the lead for the first time in the match in the 31st minute when Jack Dempsey crossed for their second try. With the home side on attack, Karmichael Hunt found himself on the receiving end of a crunching tackle, causing him to spill the ball as it flew up in the air and rebounded to Dempsey, who carried it over the line. After sending it up to TMO Ian Smith, the try was awarded, with Harrison adding the extras to give the Tahs a 14-13 lead at half-time.

The Chiefs were always likely to hit back, and they did exactly that a few minutes after the restart when Brad Weber spotted a gap behind the ruck on the 22 and raced through the hole untouched to go in under the sticks.

Things went from bad to worse for the Waratahs just a couple of minutes later when Weber crossed the line again for his second try and the Chiefs' third. It was a top-class effort that led to the score, a flowing move starting near the touchline that included several amazing offloads, including a spectacular no-look pass from Stevenson to the try-scorer.

The Chiefs were on fire now and it wasn't long before they notched up try number four. Anton Lienert-Brown threw a messy pass to Sean Wainui, but the winger managed to control the ball with his feet and kick it ahead a few times before regathering and diving over the line.

There was no way back for the Waratahs now and the Chiefs crossed for their fifth try shortly after the hour-mark as the forwards joined the party with a well-worked move from an attacking lineout five metres out. Flanker Lachlan Boshier was the man who dotted down, but the try was very much a team effort.

The procession continued a few minutes later as the Chiefs turned the ball over 30 metres from the line, allowing Weber to snap it up and send it out wide to Solomon Alaimalo for yet another five-pointer.

The visitors took their foot off the pedal in the final 15 minutes but there was still time for one final try to Lienert-Brown in the closing stages before the final whistle finally provided the Waratahs with some small measure of relief. 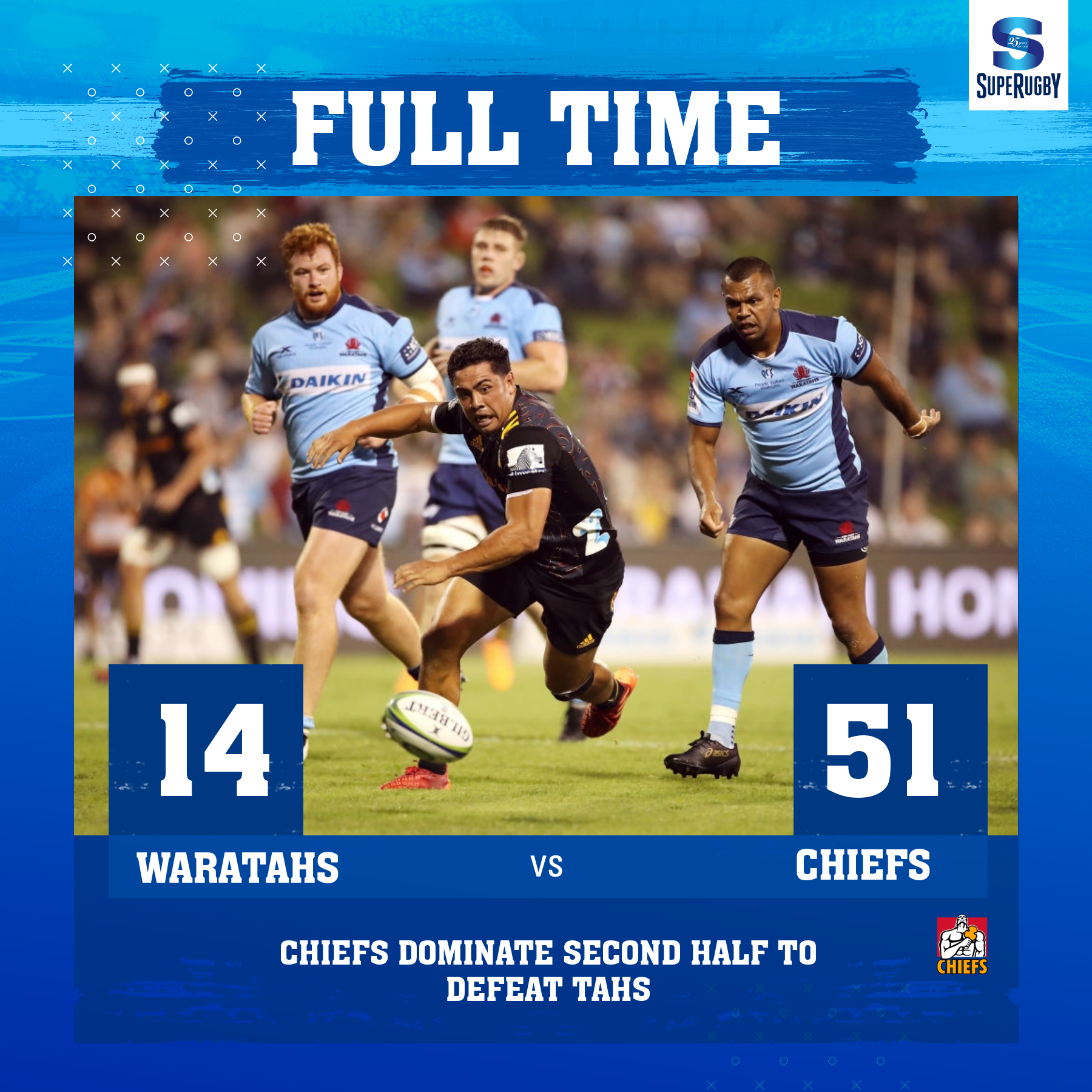