Waratahs Come From Behind to End Rebels Run

The Waratahs came from behind to end the Rebels' winning streak with a dominant 51-27 victory at a sweltering Allianz Park in Sydney on Sunday.

With temperatures between the mid to high thirties, the players were allowed to have a water break every 20 minutes. The dry outfield was ideal for running rugby and the players did not disappoint in that regard.

The Rebels conceded too many turnovers in an abject second half in which they conceded 34 points, only scoring seven. Also, they struggled to deal with Foley's up and unders and Folau's aerial prowess.

The first try came after just five minutes. With the Rebels stringing together the phases and bearing down on the Waratahs' try-line, Rebels fly-half Jack Debreczeni played a nice short pass as Jack Maddocks hit the gap, but the ball spilled out of his hands in contact where 'Tahs winger Israel Folau was on hand to gather. However, the Wallaby full-back's pass caught Kurtley Beale unaware. Beale spilled it and Tom English gleefuly accepted the gift, giving the Rebels an earrly 5-0 lead after five minutes.

Ten minutes later, Bernard Foley cut the deficit to two with a penalty after Rebels scrum-half Will Genia was penalised at the breakdown.

Reece Hodge restored the Rebels' lead with a long-range penalty after Waratahs lock Ned Hanigan was guilty of illegally entering their maul in the 23rd minute.

Soon after, Amanaki Mafi scored a sixty metre-runaway try after Lopeti Timani did well to tackle Bryce Hegarty, get over the ball and effect the turnover. From there, Maddocks made the line break before finding Mafi with the pop pass, the number eight showing tremendous pace to outsprint the Waratahs backline all the way over the whitewash.

Hodge's conversion gave the Rebels a 15-3 lead with just over ten minutes of the first-half remaining.

Despite the Waratahs enjoying sustained periods of dominance, including a ten-minute spell at the end of the first half, they were denied by some heroic last-ditch Rebels defending.

The Rebels then went up the other side of the field and as opposed to the Waratahs, only needed one chance to score. Debreczeni was heavily involved again, his offload as he was falling to the ground finding Billy Meakes who broke and ran thirty metres before playing the final pass for Maddocks, who had the easy run-in to the line, grabbing his fifth try in four games for a 22-3 lead.

However, the 'Tahs would eventually get the try they deserved before the interval. Bernard Foley's attempted grubber kick bounced back off the shins of a Rebels defender and was well collected by Beale who broke the line, before the ball went through the hands as Foley played the final pass for Lalakai Foketi to dot down.

Two minutes after the interval, the Waratahs cut the deficit to three. Foley's up and under was well collected by Folau, who won the aerial battle with Maddocks. Bryce Hegarty broke the line before his pop pass found Foley, who laid it on to Fitzpatrick, the hooker showing the sleight of hand of a backline player to release Rob Simmons for the try.

And the comeback was complete just six minutes later. Folau made the tackle on Hodge, before Michael Hooper and Fitzpatrick effected the turnover. Foley set Rona away on a mini-break, the winger showing good vision to release scrum-half Mitchell Short on his way over the try-line. Foley added the extras for a 24-20 lead.

The Wallaby fly-half added a penalty soon afterwards to make it a seven-point ball game. By now, the floodgates had opened and Hegarty got himself on the scoresheet at the end of another slick backline move. Foley got on the outside of Koroibete and Beale bent Hodge, which created the overlap for Hegarty to dot down in the corner.

The Rebels were not yet dead and buried and delivered a riposte in the 62nd minute. Having worked their way up to the 'Tahs ten-metre line, Meakes got the offload away for Matt Philip who crashed over from close range.

But it was well and truly over when Foley stretched the lead to 20 points with two further penalties, the first for a late hit and the second for not releasing.

And the icing was on the cake when Naiyaravoro scored a magnificent individual try, capping off a brilliant cameo performance off the bench, doing brilliantly to keep himself in the field of play fending off three players out on the left touchline, before dotting down for his brace. 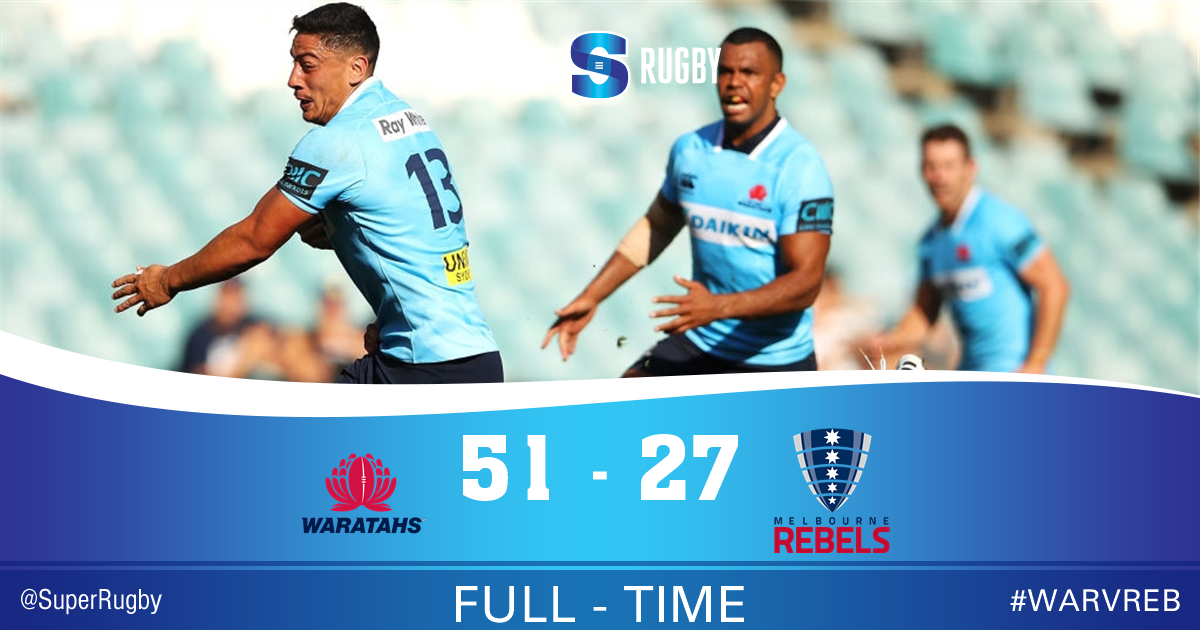