Although the Tahs moved four points clear of the Melbourne outfit on the table, a bonus-point victory over the winless Western Force next week will see Dave Wessels’ charges claim a finals berth.

Rob Penney’s men were the better side in the opening half-hour of this game, deservedly going 14-3 ahead thanks to tries from Jake Gordon and Jack Dempsey, but they were pegged back via Matt Toomua and Isi Naisarani scores.

That made it 17-17, with Will Harrison and Toomua also trading penalties, before the Tahs inched in front through Harry Johnson-Holmes. Joey Walton then extended their buffer before Marika Koroibete and Naisarani kept the Rebels in the contest.

Harrison’s late try appeared to have robbed the Rebels of a losing bonus-point but Toomua kicked a three-pointer to leave the Waratahs frustrated.

The Tahs have shown a significant improvement since the early stages of the campaign. Ironically, it was the disappointing 29-10 defeat to the Melbourne outfit back in Round 4 that appeared to be the catalyst for change.

Since then, they have been much-improved and despite a heavy defeat to the Brumbies last time out, the Sydneysiders impressed once again in the opening stages of Saturday’s encounter.

Although Toomua kicked Wessels’ side in front, the Waratahs stamped their authority on proceedings and began to pressurise their opponents’ rearguard. They showed patience and poacher Gordon, who scored a hat-trick against the Reds three weeks ago, was on hand to touch down.

The scrum-half – always a threat around the fringes – was a significant pain for the Rebels’ defence and he almost breached it for the second time when a neat lineout move saw him scamper clear. That attack broke down but it did not matter as minutes later they duly crossed the whitewash when Dempsey powered over.

It was comfortable for the Penney’s men, who were controlling most facets of play, but the Melbourne team did finally get on the front foot. They forced the Tahs to continually infringe and eventually it led to a yellow card for Ned Hanigan.

With the second-row off the field, the Rebels immediately benefited as Toomua took a nice line to finish, despite the attentions of several defenders.

He also added the conversion, leaving his side just four points in arrears, but a penalty from Harrison extended it to seven at the end of the first half.

The Rebels had the momentum, however, and levelled matters at the start of the second period. The maul, which had proved so effective before the interval, once again paid dividends as Naisarani touched down to leave the match finely poised.

The Waratahs, with their opponents in the ascendancy, could have folded, but they are made of sterner stuff nowadays and responded excellently. The close-range surge had proved effective throughout and for the third time in the match they managed to burrow over when Johnson-Holmes scored.

The Tahs’ spirits were lifted and seven minutes later they had their fourth try through Walton, who took a superb angle to scamper through and finish under the posts.

It was a potentially crucial moment with the play-offs on the line but the men from Melbourne hit back, scoring twice via Koroibete and Naisarani to leave them two points behind going into the latter stages.

A vital losing bonus-point for the Rebels was put in doubt via Harrison’s opportunistic try two minutes from time following a charge down on Andrew Deegan.

However, with time running out, Toomua’s dead-eye boot gave the Rebels one more chance to confirm their play-off place next week. 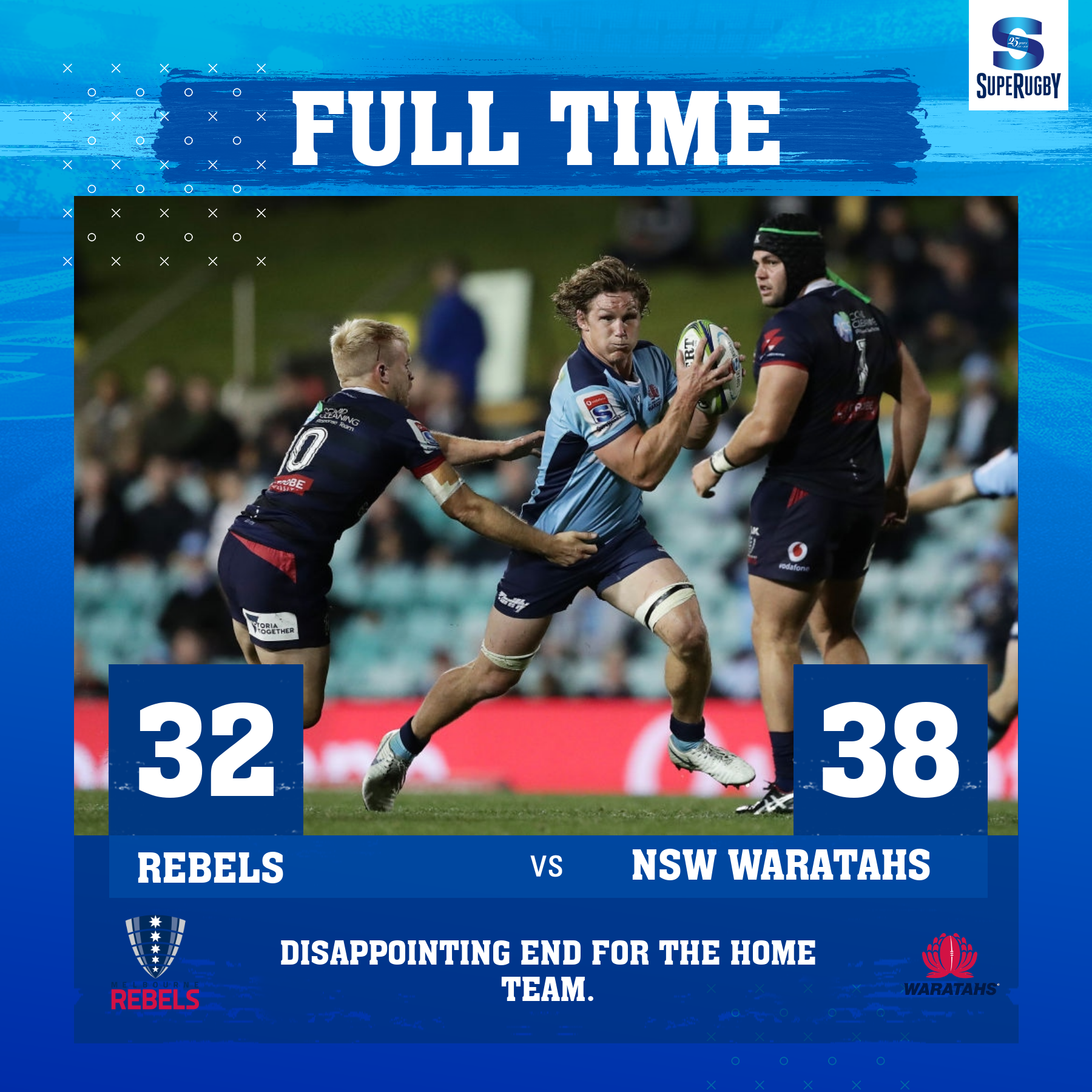