The Waratahs returned to the victory trail in Super Rugby when they secured a 52-41 win over the Reds in their Australian derby in Brisbane.

As the scoreline suggests, this was a thrilling encounter and the Waratahs were full value for their win in the end as they outscored the Reds eight tries to seven.

The result means the 2014 champions have now won nine successive matches against their traditional rivals they consolidate their position at the top of the Australian Conference table while the Reds are still in fourth place in their country’s conference.

The match got off to an exciting start when Scott Higginbotham intercepted a pass from Bernard Foley inside the Reds’ 22. Higginbotham set off towards the visitors’ tryline before offloding to Izaia Perese close to their 10-metre line and the flyer outpaced the cover defence before dotting down under the posts.

The Waratahs did not take long to respond as three minutes later Taqele Naiyaravoro drew in a couple of defenders before getting a pass out to Curtis Rona, who scored in the left-hand corner.

The Reds soon found themselves on the attack close to the Waratahs’ tryline and in the 14th minute they regained the lead courtesy of a try from Higginbotham, who showed great determination and leg drive on his way over the whitewash.

The visitors did not take long to respond though and in the 18th minute their forwards set up some phases inside the Waratahs’ 22 before Michael Wells powered his way over the tryline from close quarters.

Foley slotted the conversion to give his side a 14-12 lead and on the hour-mark the visitors pulled further ahead when Naiyaravoro beat three defenders before crossing for his side’s third try.

The Reds did not take that lying down and responded in style when Taniea Tupou burst through a couple of tackles before diving over from close quarters.

The Waratahs regained the upper hand, however, and just before half-time, Foley launched an inch-perfect crossfield kick which Israel gathered before dotting down behind the Reds’ tryline. Foley slotted the conversion to give the Waratahs a 28-19 lead at the interval.

And two minutes into the second half, the visitors launched a lineout drive deep inside the Reds’ 22 before Nick Phipps gathered and set off towards the home side’s tryline. He still had work to do but did well to glide through a gap in the Reds’ defence before crossing for his side’s fifth try.

To make matters worse for the Reds, they were dealt a further blow in the 48th minute when Kane Douglas was yellow carded for a cynical defensive foul inside the Waratahs’ half.

The Waratahs’ dominance continued and in the 51st minute Folau found himself in space deep inside the Reds’ half before sprinting away to score his second try.

But despite that score, the Reds regrouped and responed with well-taken tries from Alex Mafi and Caleb Timu which meant the visitors led 40-29 by the hour-mark.

Timu’s effort was particularly impressive and came after he pole-axed Nik Phipps on his way over the whitewash.

The final quarter was a frantic affair with both sides opting to run the ball from all areas of the field.

That approach paid dividends for the Waratahs in the 63rd minute when Jake Gordon dotted down shortly after coming on as a replacement for Phipps.

And the Waratahs hammered home their advantage when Folau found himself in space close to the Reds' try-line before offloading unselfishly to Cam Clark, who had an easy run-in for his side's eighth try which also brought up a half century of points for the visitors in the 70th minute.

To their credit, the Reds continued to attack and were rewarded late on when Jordan Petaia and Sef Fa’agase crossed for consolation tries which added some respectability to the score. 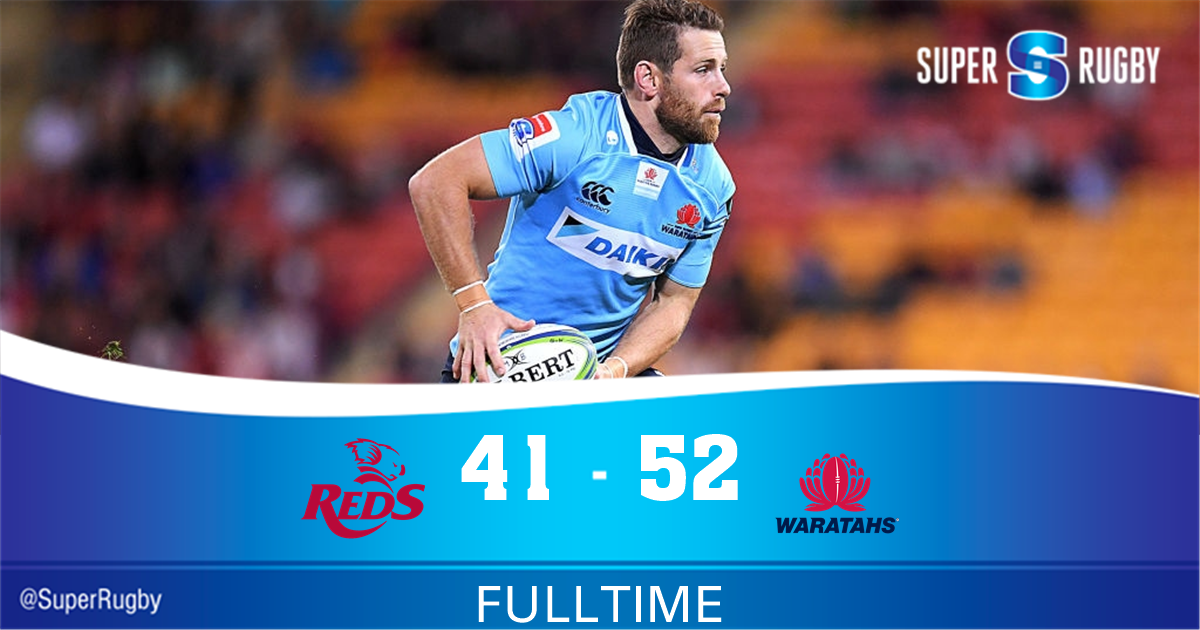