Waratahs Down Lions to Pick Up First Win of the Season

The Waratahs ended a run of three straight defeats with an impressive 29-17 win over the Lions in Parramatta.

The Australian outfit entered Friday's game rooted at the bottom of the table with zero points after three big losses, but scored some fantastic tries on the night to record their first victory of the season.

It took the Tahs just three minutes to get on the board courtesy of a peach of a try. On the attack near the Lions 22, Jake Gordon held up the ball just long enough before passing to Michael Hooper, who ran a wonderful line to break through before offloading to Angus Bell to run in under the sticks. Will Harrison kicked the easy conversion to make it 7-0 the hosts.

Things went from bad to worse for the Lions in the 12th minute when lock Ruben Schoeman was sin-binned for starting a massive brawl with a shove to the face of a Waratahs player lying on the ground.

The Tahs made their numerical advantage count within minutes as try-scorer Bell punched through the defence with another fantastic line break and took it all the way up to the Lions 22 where the ball was recycled quickly out wide to Lachlan Swinton, who dove over in the corner.

Lions flyhalf Elton Jantjies reduced the deficit somewhat with a penalty-kick from distance in the 14th minute, but the Waratahs were over for their third try moments after the restart as some more brilliant interplay and handling proved too much for the Lions defence to contain, culminating with Jack Dempsey going over in the corner.

Schoeman had barely returned to the pitch after his yellow card when Tahs try-scorer Swinton was sent to the bin for a late no-arms tackle on Jantjies.

A sequence of penalties from that incident allowed the Lions to set up a lineout right by the Tahs line, where a powerful rolling maul saw flanker Marnus Schoeman go over for the try with ease. Andries Coetzee nailed the conversion from the corner, having taken over the kicking duties from Jantjies, who was off the pitch for a Head Injury Assessment.

After an action-packed opening half-hour, the last 10 minutes of the first half and the first 10 minutes of the second passed without either team adding to their tally. The Lions were finding an increasing foothold in the match, but some strong defence from the Waratahs managed to snuff out a few try-scoring opportunities as they held on to their 19-10 advantage.

Having weathered the storm, the Tahs pounced shortly before the hour-mark with their fourth try of the evening courtesy of a fantastic counter-attack. It was Hooper who started the move when he scooped up a loose ball on the 40-metre line and carried it up the field with plenty of players in support. The ball was recycled quickly and moved through the hands brilliantly before finishing up out wide with James Ramm who went over for the score.

The visitors weren't about to lie down, however, and got themselves back in the contest 10 minutes later courtesy of another rolling maul and two quick phases on the Waratahs line to allow Schoeman to go over for his second try. Jantjies kicked the conversion to make it a seven-point ballgame with 10 minutes to go, 24-17 to the Waratahs.

But with time running out, the Waratahs sealed the win and a bonus-point to boot when replacement prop Tetara Faulkner barged over the line following another impressive move, this time from the front of the lineout, with Hooper involved again in the build-up.

Beale missed the conversion, but it mattered little as it finished 29-17 to a grateful Waratahs side for their first win of the season. 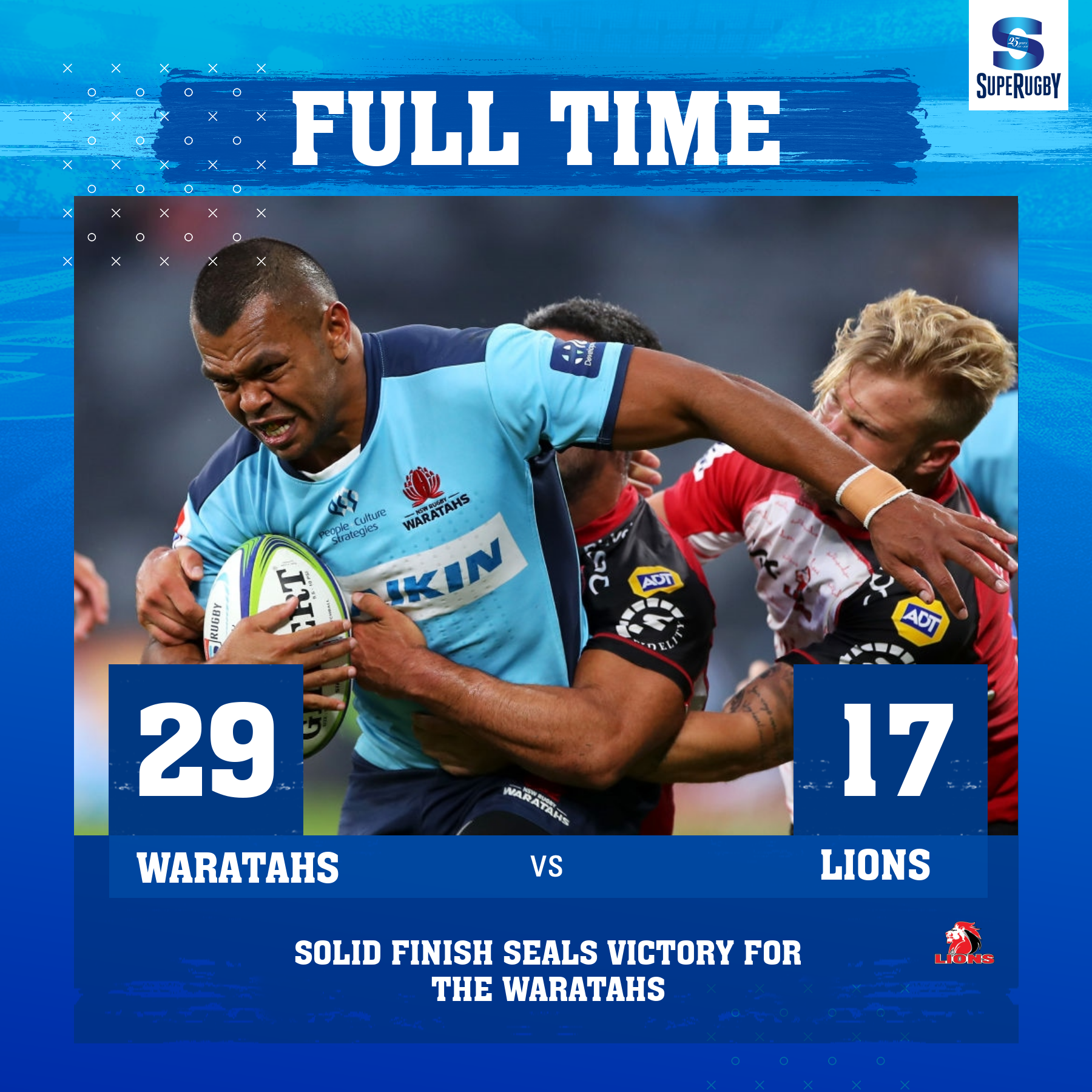