The Waratahs leapfrogged the Reds in to third place on the Australian conference with a pulsating 40-32 victory at Suncorp Stadium in Brisbane on Saturday.

The 'Tahs have now won their last 11 clashes with the Queensland outfit.

The away side opened the scoring in the fourth minute when some poor tactical kicking from the hosts allowed Waratahs centre Adam Ashley-Cooper to counter-attack, before Bernard Foley got on the outside of Taniela Tupou and bundled over the whitewash. The fly-half converted his own try for a 7-0 lead.

The hosts hit back in the 10th minute. From an attacking scrum deep in Waratahs' territory, captain Samu Kerevi got the Reds on the front foot before Angus Blyth powered over from close range with a good, low body position.

Five minutes later, the Reds took the lead, with Kerevi instrumental once again. The Wallabies centre busted through Foley's tackle in midfield before getting a brilliant offload away for Jock Campbell to finish in the corner. Bryce Hegarty failed to convert for the second time in quick succession.

The visitors responded in the 20th minute. After securing their own lineout, the 'Tahs spread the ball to the right flank. Foley was instrumental in spraying some telling passes in the build-up as Beale got the better of Kerevi before laying off the ball to number eight Wells, who added the finishing touch.

But the topsy-turvy nature of the game continued with Brad Thorn's side restoring their lead just before the half-hour mark. A Hegarty grubber kick was not cleanly collected by Beale, with Lukhan Salakaia-Loto pouncing on the loose ball. The flank quickly passed to full-back Matt McGahan, who showed excellent hands to release Sefa Naivalu for the finish in the left-hand corner.

After securing the kick-off to the first-half, Daryl Gibson's side tried to run the ball but Foley's pass intended for Ned Hanigan was intercepted by Reds centre Chris Feauai-Sautia who ran 30 metres before getting a lovely pop-pass while falling to the ground away for the supporting Hegarty, who had enough pace to run in under the sticks.

But the 'Tahs hit back almost immediately. After good build-up play down the right-hand side, scrum-half Nick Phipps' short ball released wing Alex Newsome through a gap and over the line.

The away side were proving to be their own worst enemy with their wayward passing allowing the Reds back in to the game time and time again. Some more poor distribution allowed the hosts to make another interception but hooker Alex Mafi was held by Cam Clark over the line. However, the hosts would score from the resulting scrum, as Hegarty stepped his way over for his second try in quick succession after the half-time break. The number ten could not convert his own try, however, as his effort was charged down by Phipps.

But credit to the visitors for showing the mental resilience to go up the other end and respond once again. Some entertaining ball-in-hand rugby stretched the Reds' defence out on the right-hand side before Phipps went back in field where Beale played the killer pass for Wells to break the line from close range and dot down for his brace. Foley added the extras for a 28-27 lead.

The Wallabies fly-half added a penalty goal on the half-hour mark to stretch the Sydneysiders' lead to four points after Campbell conceded a penalty for not releasing the ball.

With 15 minutes to go, it was the Reds' turn to put the ball through the hands and stretch the opposition defence. Campbell made good ground on the right before McGahan's pin-point cross-field kick found Naivalu on the left wing, who cut inside past his defender to dot down. Hegarty was unable to convert yet again - a poor kicking performance from the fly-half.

Foley then added three unanswered penalty goals in the final quarter of the match to take the result beyond the Reds' reach and make sure of the victory. 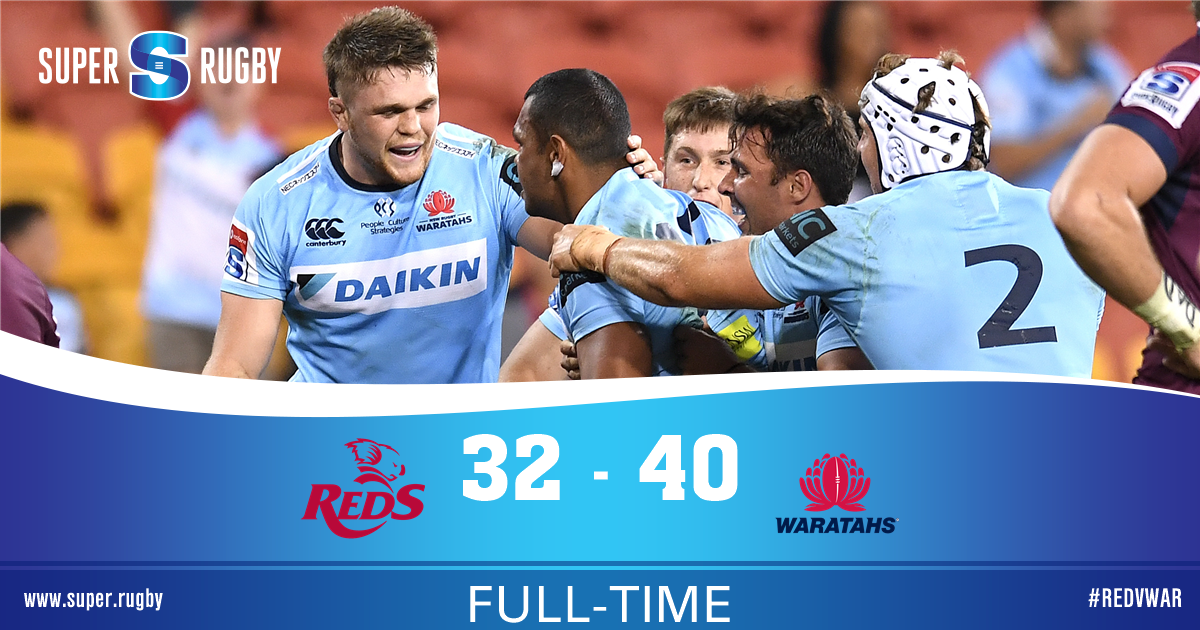