Allianz Stadium is being redeveloped so the Waratahs will play three matches at the new Western Sydney Stadium in 2019. They will also play matches at the Sydney Cricket Ground (SCG) and Brookvale Oval, Manly.

The new Western Sydney Stadium will be the venue for three of the team’s competition matches - against the Sharks (South Africa), Jaguares (Argentina) and a local Aussie derby against the Brumbies.

NSW Rugby CEO Andrew Hore said the new facility in Western Sydney provided a great opportunity to showcase the sport at its best to the local area and the international markets where rugby is played.

“Western Sydney is one of the fastest growing regions in NSW with a diverse population that has a strong passion for rugby. We want to capitalise on this and by taking the NSW Waratahs to that region it will hopefully further encourage more youngsters to take up the sport.

“This also aligns with our broader Western Sydney strategy that has looked specifically at the needs of the area to grow the game and encourage participation and fan engagement.

“The fact that we will be one of the first sports to play at the newly developed, state-of-the-art Western Sydney Stadium is a real opportunity for our fans and rugby participants in Western Sydney.

“We want to continue to grow and develop the sport in that area and the fact that the NSW Waratahs will play three matches there next year will certainly help us towards that goal,” Hore said.

Minister for Sport Stuart Ayres said Western Sydney Stadium is set to give fans an experience unlike anything they have seen before.

“No longer taken for granted, no longer second best, Western Sydney is now leading the way when it comes to sporting infrastructure and we welcome the NSW Waratahs to this fantastic new facility,” Mr Ayres said.

NSW Waratahs prop Shambeckler Vui, who was born in Bankstown, also welcomed the team’s commitment to play in Western Sydney.

“The Western Sydney area is special to me and to have the opportunity to play at a brand new stadium not far from where I was born is awesome.

“If our presence here can help more kids see what a great game rugby is and the chances you get through the sport, then I’ll be a happy man,” Vui said. 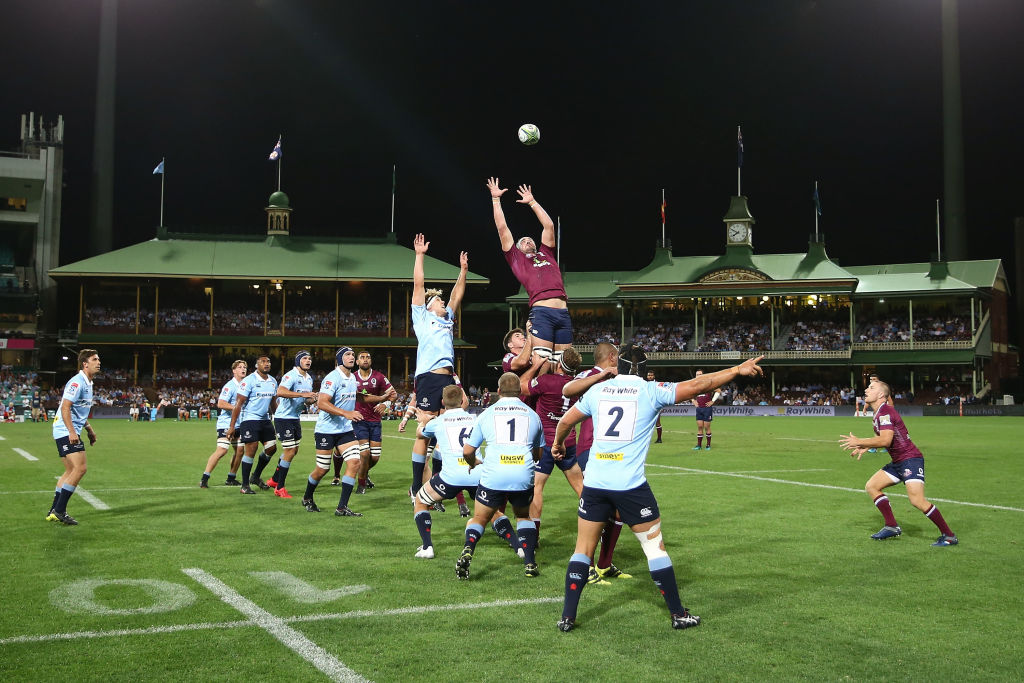 Waratahs versus Reds at SCG Super Rugby round 9 this year

One of the world’s most iconic sporting venues will provide a historic backdrop for three of the NSW Waratahs’ eight home matches in 2019.

The Sydney Cricket Ground will host a trio of blockbuster matches, including 2018 Super Rugby champions, the Crusaders followed by a real State versus State battle when NSW line up against archrivals the Queensland Reds. The third match will be another Australian derby against the Melbourne Rebels.

The SCG news follows milestone announcements that the NSW Waratahs will play three games at the new Western Sydney Stadium, a match in Newcastle and the opening Super Rugby match at Brookvale Oval.

NSW Waratahs CEO Andrew Hore said: “The NSW Waratahs are a State team and the fact that we will play our home matches at four diverse venues next year is a reflection of that, and further supports our commitment to showcasing and promoting rugby from the bush to the beach,” he said.

“The next three years, while our new stadium is being built, provides us with the unique opportunity to take the NSW Waratahs to the fans, both in our traditional fan hubs but also in new markets,” Hore said.

“We are driven by our vision of caring for the game, connecting with all our rugby communities and unifying the sport. This is an exciting time for the game in our State as our home venues provide the strong rugby community in Parramatta and surrounding areas with top international rugby while supporting the development of the game in one of our important regions.

“Brookvale Oval is the perfect backdrop for our supporters on the Northern Beaches, Newcastle gives our regional rugby family the chance to experience Super Rugby for the first time while the SCG, as one of the world’s most iconic sporting arenas, offers of supporters a sense of familiarity,” Hore added.

NSW Minister for Sport Stuart Ayres said adding the SCG to a roster of NSW venues next year will give fans across the State a chance to support the NSW Waratahs and watch top quality rugby union in their own backyards.

“The SCG is an iconic Sydney venue which is sure to produce top quality and entertaining rugby. Combining the Cricket Ground with Western Sydney, Brookvale and Newcastle as 2019 fixtures affirms that the NSW Waratahs are a State team, not just a Sydney side,” Mr Ayres said.

Hore acknowledged the ongoing support of the SCG Trust.

“We would like to thank the Trust for the work that they have done in helping us get to this point. The fact that we have been able to offer our supporters three games in a precinct that they are familiar with, and at a venue that provides a unique experience is a reflection of the level of support from the Trust.”

“At the same time, the decision to play three matches at the SCG also reflects the feedback we received from our members and other partners about their desire to play at a venue that is close to our previous home.”

“We celebrated our history and heritage in the match against the Reds at the SCG in 2018 and that was a magnificent occasion for both teams, and a first time to this iconic venue for a lot of our team. The SCG is one of world sport’s most recognisable venues and we are delighted to continue rugby’s legacy and association with the ground.

“As a global game, rugby offers plenty of unique experiences and playing at the SCG certainly ranks high,” Gibson said.