The Waratahs continued their recent resurgence with a 28-8 win over the Western Force in Friday's Super Rugby AU clash on the Gold Coast.

As the scoreline suggests, the Sydney-based outfit were full value for their triumph, outscoring their opponents three tries to one. Alex Newsome, Jack Maddocks and Harry Johnson-Holmes all crossed the whitewash for the Tahs, while Will Harrison finished with a 13-point haul after kicking three penalties and two conversions.

Brynard Stander scored the Force’s only try, while their only other points came via a penalty from Ian Prior.

The opening exchanges were cagey with both sides trying to take control of proceedings by kicking for territory, though it was the Waratahs who opened the scoring when Harrison slotted a penalty in the ninth minute.

The match came alive in the 15th minute when Stander went over in the left-hand corner after gathering a perfectly-weighted grubber kick from Richard Kahui inside the visitors’ 22.

Prior failed with the conversion attempt and midway through the half, the Waratahs regained the lead when Harrison added his second penalty.

That lead did not last long though as the Force were back in front by the 27th minute when Prior succeeded off the kicking tee. That would turn out to be the last time they would score points, however, as the visitors took control of the contest.

In the 32nd minute, Harrison slotted his third penalty, and shortly afterwards Newsome had an easy run-in out wide after Jake Gordon laid the groundwork with a strong run in the build-up.

Harrison added the extras which meant the Waratahs had their tails up with the score 18-6 in their favour at half-time.

Shortly after the restart, Maddocks intercepted an ambitious long pass from Jono Lance just inside the Waratahs’ half and raced away before crossing for his side’s second five-pointer.

In the 53rd minute, a strong Force scrum on the Waratahs’ five-metre line resulted in Henry Stowers crossing the whitewash off the back of the set-piece, but he failed to ground the ball after being held up by two defenders.

Soon after, Maddocks ran a perfect line before dotting down under the posts, but his effort was disallowed after an infringement in the build-up from Johnson-Holmes.

The Waratahs continued to dominate but had another try disallowed during the game’s closing stages. This, when Harrison delivered an excellent chip kick which Karmichael Hunt gathered just outside the Force’s 22. He offloaded to Gordon, who dotted down but television replays revealed that the scrum-half was in an offside position in the build-up.

Despite that setback, the Waratahs finished stronger and sealed their win just before full-time when Johnson-Holmes made up for his earlier indiscretion by barging over for his side’s third five-pointer from close range. 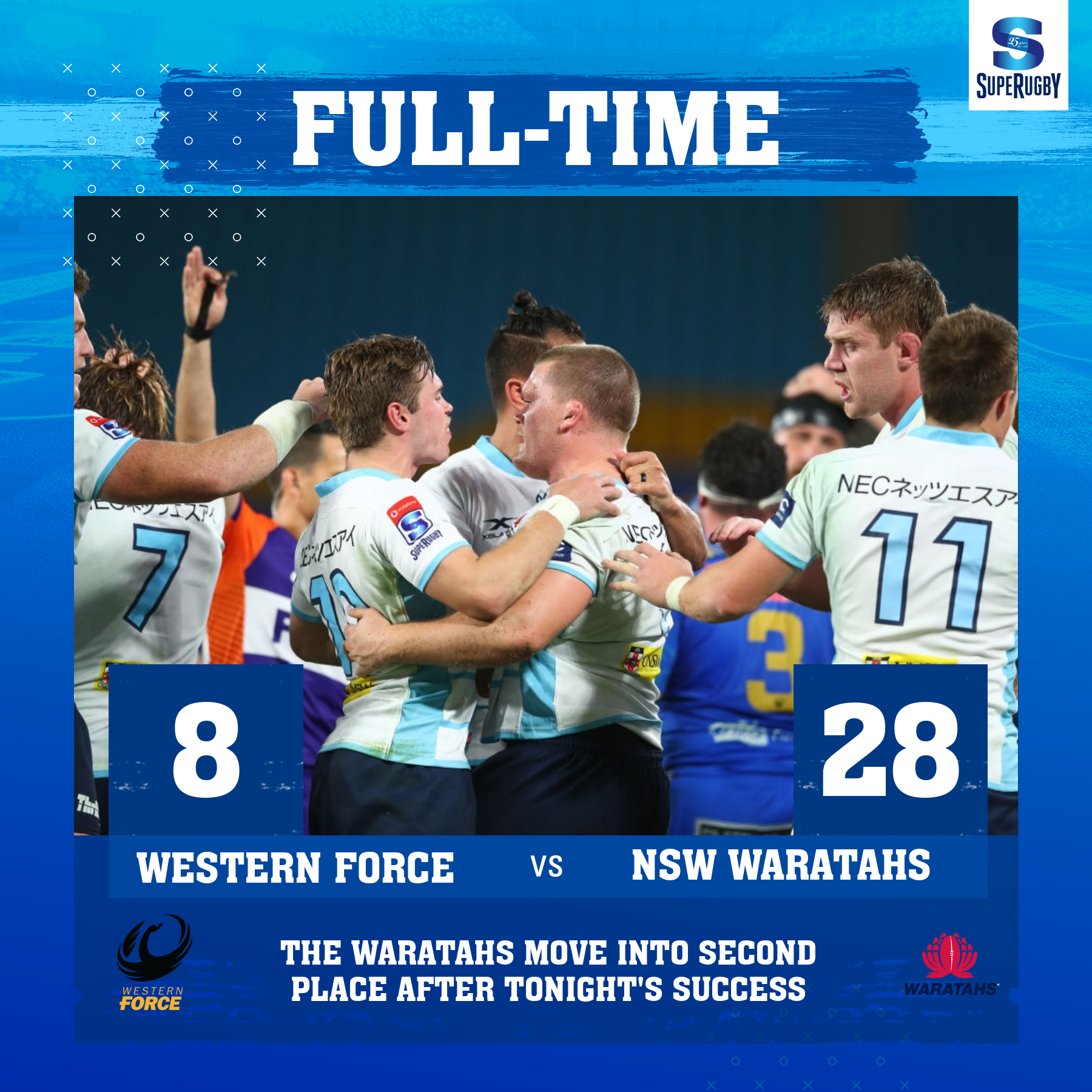