The Waratahs extended their lead at the top of the Australian Conference with a 31-26 victory over the Melbourne Rebels at AAMI Park.

The victory takes the 'Tahs five points clear of second-placed Rebels in the Australian conference.

It was a game of two halves as the Waratahs bossed the first half, with the Rebels wresting back control of the match in the second. However, it was not to be as the Waratahs stormed back with two quickfire tries in the last twenty minutes to seal the victory.

Tries from Taqele Naiyaravoro, Will Miller, Ned Hanigan and Bernard Foley proved too much for the Rebels who scored through Dane Haylett-Petty and Michael Ruru.

From the kick off, the Waratahs knocked the ball on with the Rebels regathering and immediately going up the other end of the field before winning a penalty as 'Tahs flanker Miller was penalised for going off his feet. Reece Hodge made no mistake with the resulting penalty as the hosts took an early 3-0 lead.

The Waratahs gradually began to grow in to the game and in the 15th minute momentum swung their way even further when Rebels inside centre Billy Meakes was yellow-carded for a cynical offence at the breakdown with the visitors on the front foot.

Finally the dam wall broke in the 20th minute as the Waratahs capitalised on their numerical advantage when Bernard Foley's pass found Kurtley Beale, who got on the outside of Rebels full-back Dane Haylett-Petty before playing the final pass for Naiyaravoro to ghost in out on the left-hand touchline for his 12th try of the season. Foley converted for a 7-3 lead.

The 'Tahs fly-half gave the away side some more breathing space ten minutes before the interval when his penalty sailed between the posts after Angus Cottrell was penalised for not releasing the tackler. Rebels captain Tom English subsequently received a warning from referee Nic Berry for his side's repeated infringements at the breakdown.

The Rebels got their first try in 36th minute and it came from first phase off the back of a lineout on the left-hand side of the field. Ruru swung a long pass out right to Meakes - his pass finding Haylett-Petty who broke clean through the Waratahs' defence for a clear run to the line, after Jack Maddocks had made an excellent decoy run.

Two minutes later and just two minutes before half-time, Curtis Rona did well to create the space for Wells, who straightened well and found Alex Newsome out on the right-hand overlap, who played the final pass inside for Miller to dot down for his second try of the season as the 'Tahs took a 17-10 lead in to the interval.

While it was the Waratahs who dominated the first half, it was the Rebels who controlled the second. Having taken the ball through multiple phases, Ruru reached over the back of a ruck to dot down in an instinctive piece of play from the nuggety scrum-half. Hodge made no mistake with the conversion to level the scores at 17-17.

Soon afterwards, the Rebels were in front via a Hodge penalty after the Waratahs front-row were penalised for angling in. And when he added another three-pointer with a quarter to go, it meant the 'Tahs needed to score more than a converted try.

However, the topsy-turvy nature of the match continued as the 'Tahs hit back. Kurtley Beale made the initial break with an intercept but didn't have the pace to make it all the way to the line. The ball was swiftly recycled, where Hanigan was on hand to crash over for his side's third. Foley's conversion cut the deficit to just two at 26-24 with ten minutes to go, setting up a tense finale.

Two minutes later, the turnaround was complete when Foley pounced to intercept a Meakes pass and run 50 metres for the clear run-in to the line as he converted his own try for a 31-26 lead. 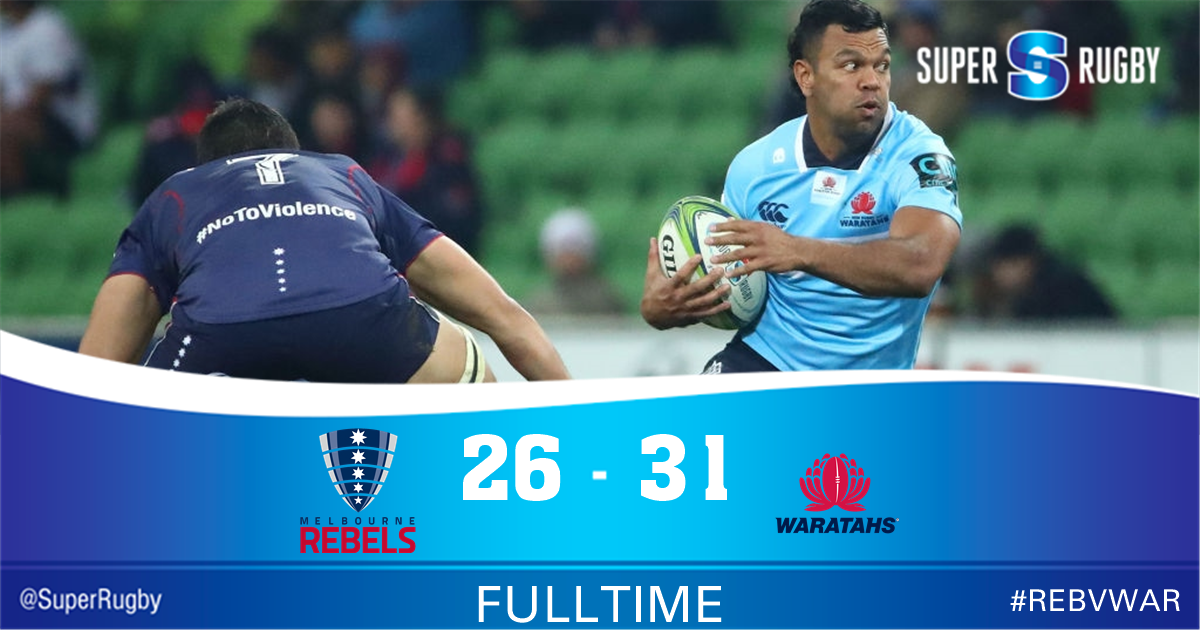