Waratahs Storm Back to Stun Highlanders

The Waratahs claimed a dramatic 30-23 come-from-behind victory over the Highlanders in a thrilling Super Rugby quarter-final at Allianz Stadium in Sydney.

The Highlanders led 23-6 at half-time, having controlled the opening period, but the Waratahs stormed back in the second half, scoring three tries of their own and keeping the visitors scoreless to complete a remarkable turnaround.

The Sydneysiders had their old-timers Kurtley Beale and Israel Folau to thank for being the main instigators in their comeback as they sparked the Waratahs in to life with their tries coming from Folau and Bernard Foley (2).

The Highlanders scored in the first-half through Waisake Naholo and Rob Thompson, but were thwarted in the second by some brilliant Tahs' defence.

The hosts got the scoring underway. Foley struck his penalty between the uprights after James Lentjes was penalised for offside but Lima Sopoaga responded for the visitors with 'Tahs lock Jed Holloway the guilty party for not rolling away.

Foley restored the lead for the hosts when Thompson was penalised for not releasing after brilliant work from Michael Wells to get his hands over the ball and affect the turnover.

But soon after the Highlanders would score the game's first try when Curtis Rona rushed out of the line and Sopoaga exposed the poor read in defence by the hosts, breaking the line and playing a long pass out for Naholo to show blistering speed in his run to the line. Sopoaga added the extras for a 10-6 lead.

Sopoaga extended the lead to 13-6 when excellent defensive pressure left Folau isolated at the breakdown and he conceded the penalty on the 22 right in front of his posts.

The Highlanders were winning the battle at the breakdown and effecting numerous turnover penalties. After soaking up a period of pressure and forcing the hosts to concede yet another penalty for holding on, the ball was kicked for the corner. Then followed an excellent backline move in which Teihorangi Walden got the offload away for Thompson, who had run an excellent support line, to coast in under the posts. Sopoaga's conversion gave his side a 20-6 lead.

The Highlanders pivot slotted another penalty in the 34th minute after the Waratahs were penalised for not scrummaging straight as the hosts took a 23-6 lead into the interval.

The Waratahs received a boost shortly after the interval when Naholo saw yellow for two high tackles in quick succession on prop Sekope Kepu and the home side ruthlessly capitalised on their numerical advantage, scoring three quick tries in the space of six minutes to complete an amazing turnaround.

First, Kurtley Beale found Foley with a lovely short, inside ball from first receiver with the Waratahs now trailing 13-23 with 25 minutes to go.

Then, scrum-half Nick Phipps pounced on a loose ball after the 'Tahs did well to disrupt a Highlanders lineout. Beale then turned creator once again, making the tackle bust in midfield before unleashing Folau, who showed his gas with the finish. Foley added the extras to bring the home side to within just three points.

And on the 60-minute mark, the comeback was complete as Folau did brilliantly once again, this time going on a 60-yard run before the ball went through the hands as Foley eventually grabbed his brace.

The Waratahs went 30-23 ahead with another Foley penalty but were then reduced to 14 men for the rest of the game when replacement Paddy Ryan was yellow-carded for cynically preventing a try, which gave the Highlanders another bite at the cherry with a five-metre scrum.

Amazingly, the Waratahs managed to hold on for a dramatic come-from-behind victory. 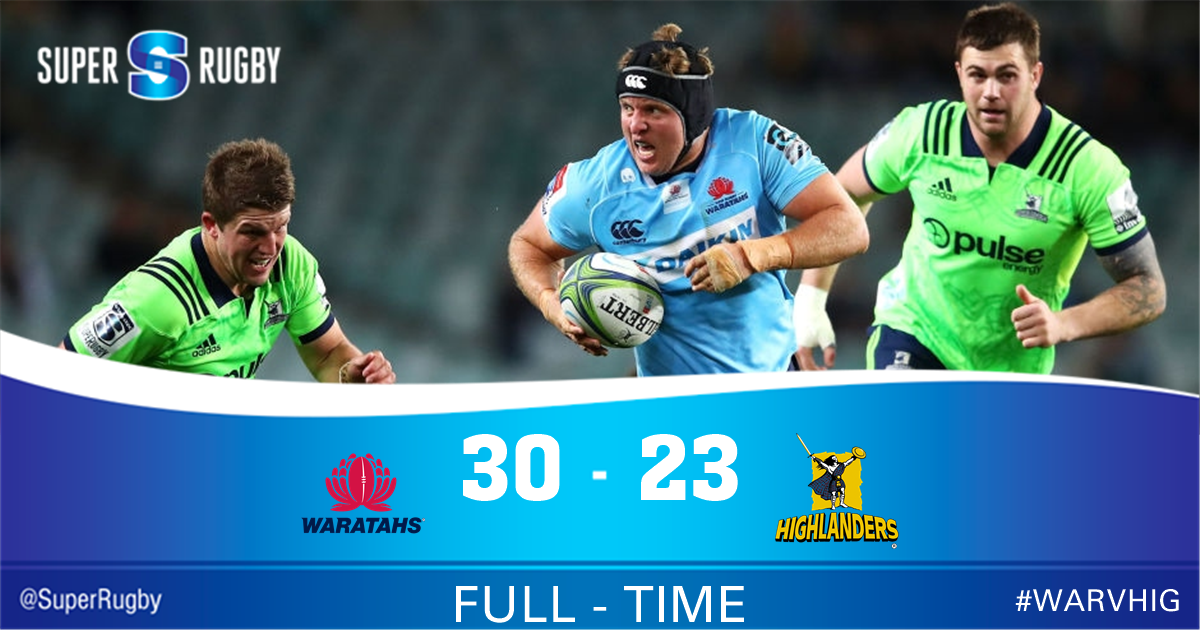