The Blues returned to the victory trail when they claimed a 24-21 win over the Waratahs in their Super Rugby clash in Sydney on Saturday.

The men from Auckland had to dig deep for this win as the Waratahs outscored them three tries to two, but the home side will be kicking themselves as they committed a plethora of unforced errors which proved the difference between the sides in the end.

The result, once again, highlights the difference in class between teams from the trans-Tasman countries as New Zealand sides have now won 38 consecutive matches against their counterparts from Australia with the last Australian triumph registered in Round 14 of 2016 when the Waratahs beat the Chiefs.

This was only the Blues’ third victory of the season although they still occupy bottom place in the New Zealand Conference standings while the Waratahs are still in first place on the Australian Conference table.

The Blues had the better of the early exchanges and opened the scoring in the seventh minute when Rieko Ioane dotted down thanks to superb attacking play after Israel Folau faileds to clear a kick-through from Augustine Pulu.

Stephen Perofeta slotted the conversion and made it 10-0 to the visitors when he added a penalty midway through the half after Will Miller was blown up for obstruction.

The visitors were dealt a blow in the 24th minute, however, when Dalton Papalii was yellow carded for a high tackle on Cam Clark deep inside the Waratahs’ 22.

The home side put the resulting penalty into touch, on the Blues’ five-metre line, and were rewarded when Damien Fitzpatrick scored their first try off the back of the lineout drive.

Bernard Foley added the extras but despite holding a narrow 10-7 lead and having a man in the sin bin, the men from Auckland stayed true to their attacking roots and were rewarded when Tumua Manu crossed for their second try on the half-hour mark.

This, after Perofeta made an impressive line break before offloading to Matt Duffie, close to the Waratahs’ 10-metre line, and he was soon inside his opponents’ 22 where he offloaded to Manu, who stepped past a couple of defenders before diving over in the right-hand corner.

The hosts did not take that lying down and struck back shortly afterwards when Sekope Kepu went over for their second try from close quarters after his forwards did well by setting up several phases in the build-up.

Foley slotted the conversion but the Perofeta added a penalty in the 39th minute which meant the Blues led 18-14 at half-time.

The Waratahs made the brighter start to the second half but despite spending the early part of the half camped inside the Blues’ half, they committed several mistakes on attack which gifted the ball to the Blues.

The Blues eventually extended their lead in the 62nd minute courtesy of another Perofeta penalty, after the Waratahs went offside on defence, and the pivot made it 24-14 five minutes later when he succeeded with another shot at goal.

The Waratahs needed a response and that came in the 71st minute when Michael Hooper ran onto a pass from Kurtley Beale before beating a defender inside the Blues’ 22 on his way over the try-line.

That set up a tense finish and although the Waratahs were camped inside the Blues half during the game’s closing stages, the visitors held on for the win. 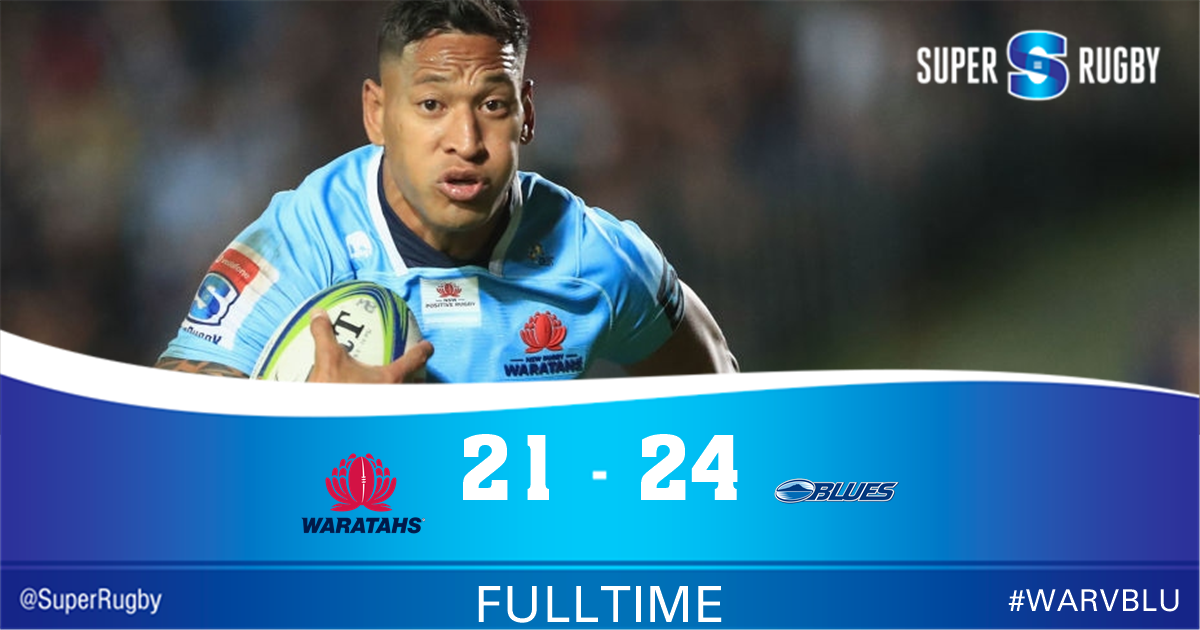