Waratahs victorious over the Brumbies in stop start Derby

The Waratahs continued with their impressive recent form when they secured a 24-17 win over the Brumbies in their Australian Canberra on Saturday.

In a tightly contested battle, the Waratahs outscored their hosts two tries to one with Taqele Naiyaravoro scoring both the visitors' five-pointers and the result means the men from Sydney end a three-match losing streak against the Brumbies.

The victory moves the Waratahs above the Reds into second position on the Australian Conference table while the Brumbies are still in fourth place. All three sides have played five matches so far – one less that the Rebels, who are at the top of the standings.

The match started on an even keel and the sides were deadlocked at 3-3 by the 10th minute after Bernard Foley and Wharenui Hawera traded penalties. However, the Waratahs suffered a major setback in the fourth minute when Israel Folau was forced off the field with a hamstring injury.

Both teams added a penalty apiece during the next 15 minutes which meant they were level at 6-6 although the Waratahs should have held a 12-6 lead but Foley was off target with two further shots at goal. 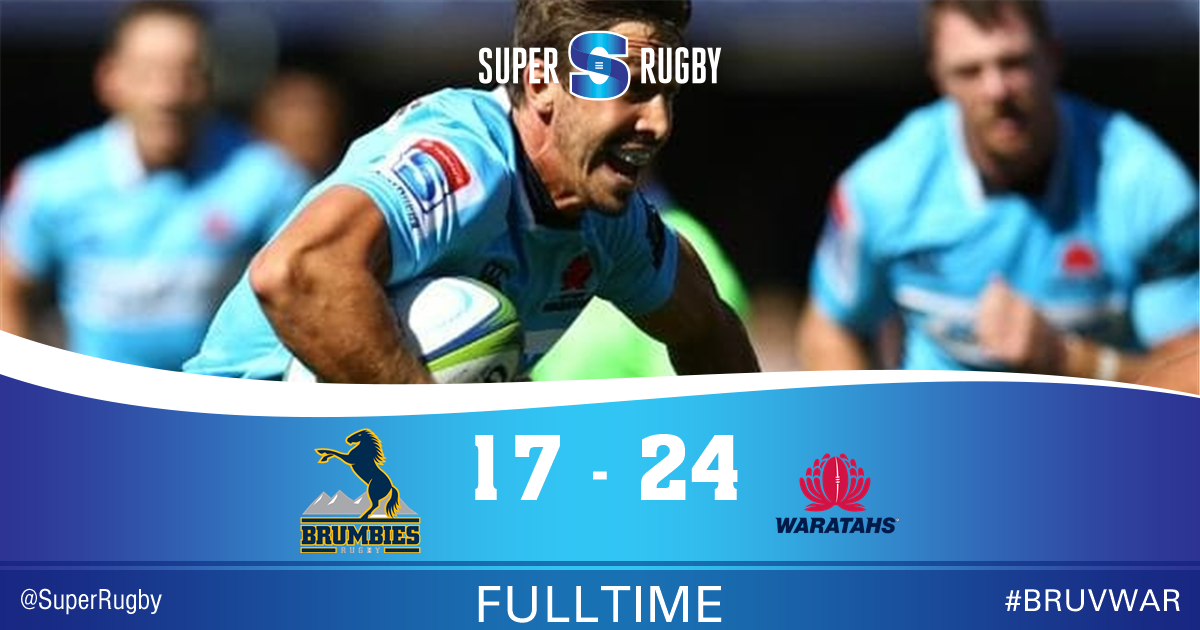 behind the Waratahs' defence and stabbed a perfectly-weighted grubber kick through which Lausii Taliauli gathered before dotting down.

Hawera's conversion attempt was wide of the mark which meant the home side led 11-6 but just before half-time Naiyaravoro found himself in space close to the halfway line and rounded Henry Speight before racing away to score his side's first try.

Foley did well to convert from close to the touchline which meant the match was evenly poised with the Waratahs leading 13-11 at the interval.

The visitors made a terrific start to the second half and shortly after the restart, Foley and Kurtley Beale combined brilliantly to create space for Alex Newsome. The replacement back was soon deep inside the Brumbies' 22 and did well to throw an inside pass to Naiyaravoro, who crossed for his second. try.

The Brumbies tried desperately to haul in their visitors but although Hawera added another penalty in the 71st minute, the Waratahs cancelled that effort out when Foley slotted his fourth penalty in the game's closing stages.