What Can We Learn From Past Finals?

Two teams with very contrasting stories will contest the 2019 Final: nine-time and reigning champions the Crusaders; and Finals debutants the Jaguares.

The Crusaders have the wood over the Jaguares in Super Rugby, having won each of their only two previous meetings, but the Argentine squad will know that they have a very real chance to win when they run out onto Orangetheory Stadium on Saturday night.

They’ll be attempting to overcome the most successful team in Finals in the history of Super Rugby. 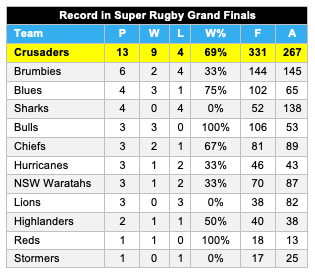 The Jaguares – who will be appearing in their maiden Super Rugby Final just four years into their tenure in the competition – will be out to put the Crusaders to their fifth loss at this stage, which would also be the outright most of any team.

Though not featuring this season, the Bulls and Reds can boast a unique accomplishment in that they are the only teams in Super Rugby to have a 100% win rate in Finals that they’ve contested. On the flip side, the South African trio of Sharks, Lions, and Stormers are the only teams with a 0% win rate at this stage.

Super Rugby games are already a tough task to win away from home without the added pressure of a do-or-die clash for the trophy and it gets all the more difficult to do so at the ultimate stage.

Only twice in Super Rugby history has any team won a Grand Final when playing outside their home country, with the Crusaders pulling off this trick against both the Brumbies in 2000 and the Lions in 2017 – no other team has done so.

An early lead is often the deciding factor in Super Rugby Finals as well. Seven of the last nine Finals have been won by the team holding the lead at half-time, including each of the last five on the bounce. The last team to win a Grand Final after trailing at the break was the Chiefs in 2013, who bounced back from a 16-9 half-time deficit against the Brumbies to earn a 27-22 win by full-time.

All in all, history may suggest one thing but only the players come Saturday night can decide how the next chapter is written.