What It Takes To Win Super Rugby

What is the formula for Super Rugby success? It appears it does vary given the last few years with champions from all three core territories...

The years of Super Rugby have thrown up an array of different champions, with all three of the major competing nations featuring significantly on the competition’s honour roll. The last nine years, though, have told the story that there are multiple means of making it to the trophy and this week we look at some of those paths to success in detail.

The Crusaders are the reigning three-peat champions of Super Rugby, but they have not had it all their own way in recent times. The Reds won their maiden Super Rugby title in 2011 and did so with an all-round effort. Though they did not lead in any of the key categories per game throughout the season, they were among the top echelon of teams in nearly every way.

The Chiefs were next in line, snatching back-to-back Super Rugby championships in 2012 and 2013. They did this on the back of a super attack, leading the competition in metres, clean breaks and offloads in 2012. They added another string to their bow in 2013, finishing second in most tackles and turnovers won per game that season. One area of weakness for the Chiefs was discipline; their 11.6 penalties conceded per game in 2012 were the second-most of any team that campaign. 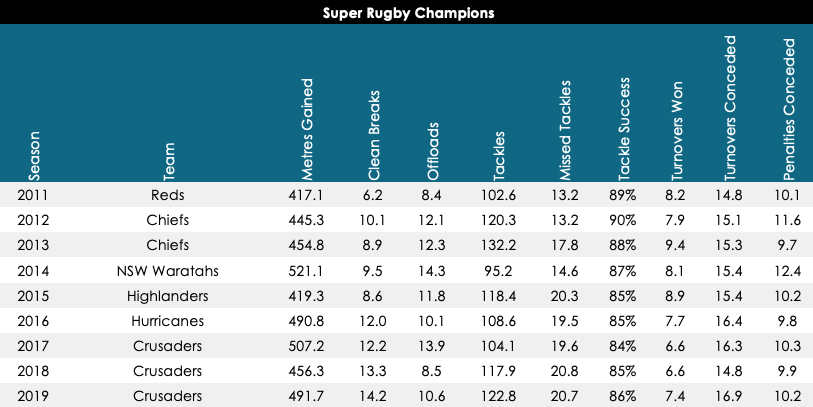 The 2014 season belonged to the NSW Waratahs who won the competition in a similar shape to the 2012 Chiefs. The New South Wales club gained the most metres, made the most offloads and the most clean breaks per game of any team that season – however, they were also the second-most penalised outfit with 12.4 infringements per game.

The Highlanders’ success in 2015 came in sharp contrast to what we have expected to see from the top teams in recent years. They did a lot of their winning without the ball in hand that season. The Highlanders’ tally of 8.6 clean breaks per game is the lowest of any team to have won a Super Rugby championship in the last eight seasons and it is the last time any team did so without averaging at least 10 per game. The Highlanders simply had a way with their defence – forcing a season-high 8.9 turnovers per game in 2015 – more than any Super Rugby champion has managed since.

The Hurricanes [pictured below] – who had lost to the Highlanders in the previous season’s final – would clinch the 2016 Super Rugby trophy on the back of an all-round performance, ranking highly in most categories without topping any of the major ones. They made 12 clean breaks per game in that campaign and while it might not have been the most of any team that season, it was more than any of the previous five Super Rugby champions had managed in their campaigns. 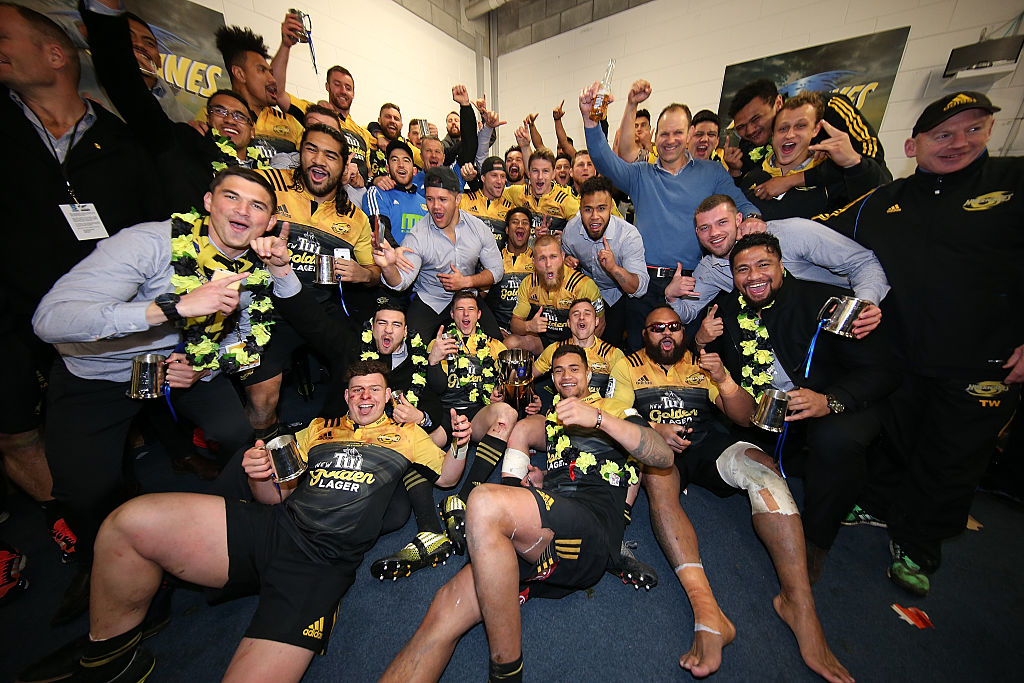 2017 saw the beginning of the Crusaders new era of dominance. They led from the front, gaining an average of 507 metres per game in 2017 and relying heavily on their second-phase play with nearly 14 offloads per game – the second most of any team to have lifted the trophy in the last nine years.

The 2018 and 2019 seasons only saw a further rise to power of the Crusaders offensive fortunes. In 2018 they made the third most clean breaks of any team in the competition – 13.3 per game. This had seemingly come at the cost of their enterprising play, though, with the team finishing the lowest of the New Zealand clubs in terms of offloads per game.

In 2019 they were simply dominant, leading the competition in metres gained and clean breaks, as well as conceding the fewest turnovers of any team in the competition.

Across the years we have seen examples of how to win a competition with either offensive prowess or staunch defence, and the formula for success is a fluid one.