Who Is Providing the Go Forward?

The Melbourne Rebels began the 2018 campaign faster than most of their rivals, and though they’ve fallen away in recent rounds there’s been one player who has kept the momentum going.

Amanaki Mafi has been among the premier forwards in the competition this season, carrying on from a strong showing in the 2017 campaign.

The Rebels’ number eight has made 148 carries this campaign, far more than any other forward in the competition and, indeed, the most of any player from any position this term.

Likewise, his sheer quantity of carries makes it no surprised that he also leads the competition in metres gained. Mafi’s 841m gained this season from just 10 games make him one of only two players to have made more than 700m alongside the Chiefs’ Solomona Alaimalo. In fact, Mafi is set to break through the 1,000m gained barrier in just two more games if he keeps up at this rate. 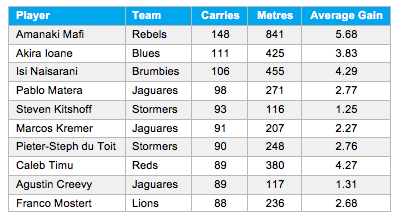 Outside of the hard yards, no forward has been as damaging as the Blues’ Akira Ioane who, along with an impressive try scoring record, has beaten a competition-high 51 defenders from just 10 games played this season. No other forward in the competition has beaten more than 29.

Further cementing his role as the most explosive forward in the competition right now, Ioane has also made 10 clean breaks, four offloads, and crossed for seven tries - more than any other forward.