We take a look at the competitions top wingers and their contribution to the scoreboard and entertainment factor so far this season.

The Sunwolves are playing some attractive rugby in Super Rugby 2019, and crucial to this is their duo of dynamic wingers who have shown to be amongst the most productive 'flyers' in the competition this campaign.

Sunwolves’ duo Semisi Masirewa (82.2m) and Gerhard van den Heever (80.8m) have gained more metres per  80 minutes in Super Rugby 2019 than any other wingers in the competition.

In fact, not only are they at the top of the category, but they are 10m per 80 minutes higher than next-best winger Wes Goosen (70.8). 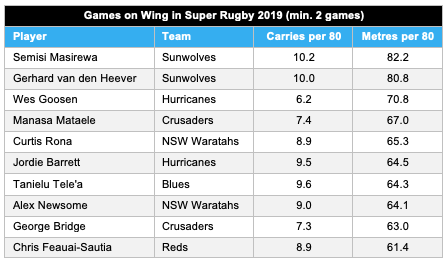 Masirewa and van den Heever’s yardage has been crucial in the successes of the Sunwolves this season, and their continued productivity will see them remain among the premier wingers in the competition.

Jack Maddocks yardage (32.2m per 80) may not hold a candle to the impressive gains of Masirewa and van den Heever, but he’s made his touches count more than any flyer in the competition this campaign.

Mataele and Speckman have given themselves plenty of opportunity to add to their respective try tallies as well. The Crusaders winger has made 3.4 clean breaks per 80 minutes this season in games on the wing, significantly more than any other player in the competition. Bulls flyer Speckman ranks third in this regard behind metre-eater Semisi Masirewa of the Sunwolves and is firming as the premier winger in South Africa in Super Rugby 2019.