The last decade of Super Rugby has seen a steady rise in victories by away teams and a marked increase from the competition’s early years.

Super Rugby contests have become tighter and more unpredictable as the competition has etched more seasons into it’s history, and the advent of the local Super Rugby Aotearoa and Super Rugby AU competitions have thrown up several indicators of the professionalism that we’ve come to expect from the modern day rugby team.

Earning wins away from home is an impressive feat and an accurate indication of a team’s professionalism in the face of adversity. The last decade of Super Rugby has seen a steady rise in victories by away teams and a marked increase from the competition’s early years. 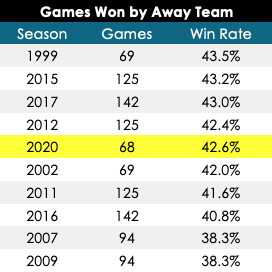 A spate of wins on the road in both Super Rugby Aotearoa and Super Rugby AU indicate that we could be in for a tight finish in both competitions. In fact, five of the last six Super Rugby games overall have been won by the away team on the day, with the Brumbies the only team to snatch multiple away wins within that short stretch.

Despite the two localised competitions posing less of a burden for the away teams – given that they are only travelling within their own country of origin rather than making international trips to play Super Rugby fixtures, there is still a mix of fortunes across the current games. The 2020 Super Rugby competition saw a win rate of 43% for away teams in the 46 games that were played throughout, and that is a figure mirrored in Super Rugby Aotearoa as it heads towards its culmination.

The Australian contingent have been less friendly towards teams playing as the designated away team on the day. Three of the eight games in the opening four rounds of Super Rugby AU have been won by the away team, accounting for just 38% of all fixtures. While that is lower than the 2020 Super Rugby campaign and Super Rugby Aotearoa, it is still a significant increase on the 2018 (31.5%) and 2019 (35.4%) campaigns.

On a team level, none have been more effective away from their own patch this season than the Brumbies, who have won all four of their away games thus far in 2020. The Blues (W5) have won more overall on the road, but also have two away defeats to their name this year.