All Blacks run rampant over Wallabies in Perth

New Zealand were ruthless on attack against a lacklustre Australian outfit in their Rugby Championship clash in Perth on Sunday, winning 38-21.

Like the previous two Bledisloe Cup Tests, the All Blacks controlled proceedings for long periods and although they had to play with 14 men for 20 minutes, after Jordie Barrett was red carded for a dangerous flying kick to Marika Koroibete's face – while gathering a high ball – late in the first half, they thoroughly deserved their victory.

In the end, New Zealand outscored their hosts six tries to three with David Havili leading the way with a brace of five-pointers while Jordie Barrett, Will Jordan, Anton Lienert-Brown and George Bridge also crossed the whitewash. The All Blacks' other points came courtesy of two penalties and a conversion from Beauden Barrett.

The Wallabies made a superb start and in the third minute, Samu Kerevi made an excellent line break which had the All Blacks' defence at sixes and sevens. He did well to offload to Marika Koroibete, who shrugged off a couple of defenders on his way over the try-line but his effort was disallowed when television replays revealed that Kerevi had launched the attack from an offside position at a ruck in the build-up.

From the resulting penalty, the visitors were soon camped inside Australia's half but despite an extended period camped close to the home side's try-line, they could not score a try but eventually opened the scoring in the ninth minute courtesy of a Barrett penalty.

The All Blacks continued to hold the upper hand and in the 15th minute, Barrett made it 6-0 when he slotted his second penalty after James Slipper was blown up for illegal play on defence.

Beauden Barrett delivered a perfectly weighted grubber kick which Will Jordan gathered before passing to Brad Weber and he was in the clear inside Australia's half. Weber did well to draw in Noah Lolesio before offloading to Jordie Barrett, who had an easy run-in next to the posts.

In the 28th minute, Australia had a chance to open their account when Nepo Laulala strayed offside on defence but Lolesio was off target with his shot at goal.

Despite that setback, the Wallabies received a shot in the arm soon after when Barrett was red carded in controversial fashion. This, while gathering a high ball in his half but as he descended to the ground his boot struck Koroibete’s face and after watching replays and consulting his TMO, referee Damon Murphy ruled that Barrett's kick was dangerous and issued a red card.

With an extra man on the field, Australia were soon on the attack in New Zealand's half and in the 39th minute Koroibete dotted down after a lineout drive deep inside New Zealand territory. That score was ruled out, however as a television replay showed that he had crawled on his way over the try-line.

That proved costly as on the stroke of half-time Havili went over for his first try, off the back of a maul, and the All Blacks had their tails up at the interval with the score 18-0 in their favour.

Just like the first half, Australia were fastest out of the blocks in the second period and in the 50th minute a superb line break from Tate McDermott set up a well-taken try for Folau Fainga'a.

The Wallabies' joy didn't last long as five minutes later Akira Ioane beat three defenders before offloading to Jordan, who crossed for the visitors' third try before Havili intercepted a wayward pass from Matt Philip and raced away for his second five-pointer on the hour-mark.

The final quarter was a frantic affair with both sides running the ball from all areas of the field. Australia were rewarded when White scored his try in the 66th minute but New Zealand cancelled that effort out with further five-pointers from Lienert-Brown and Bridge before Banks scored a consolation try in the game's closing stages. 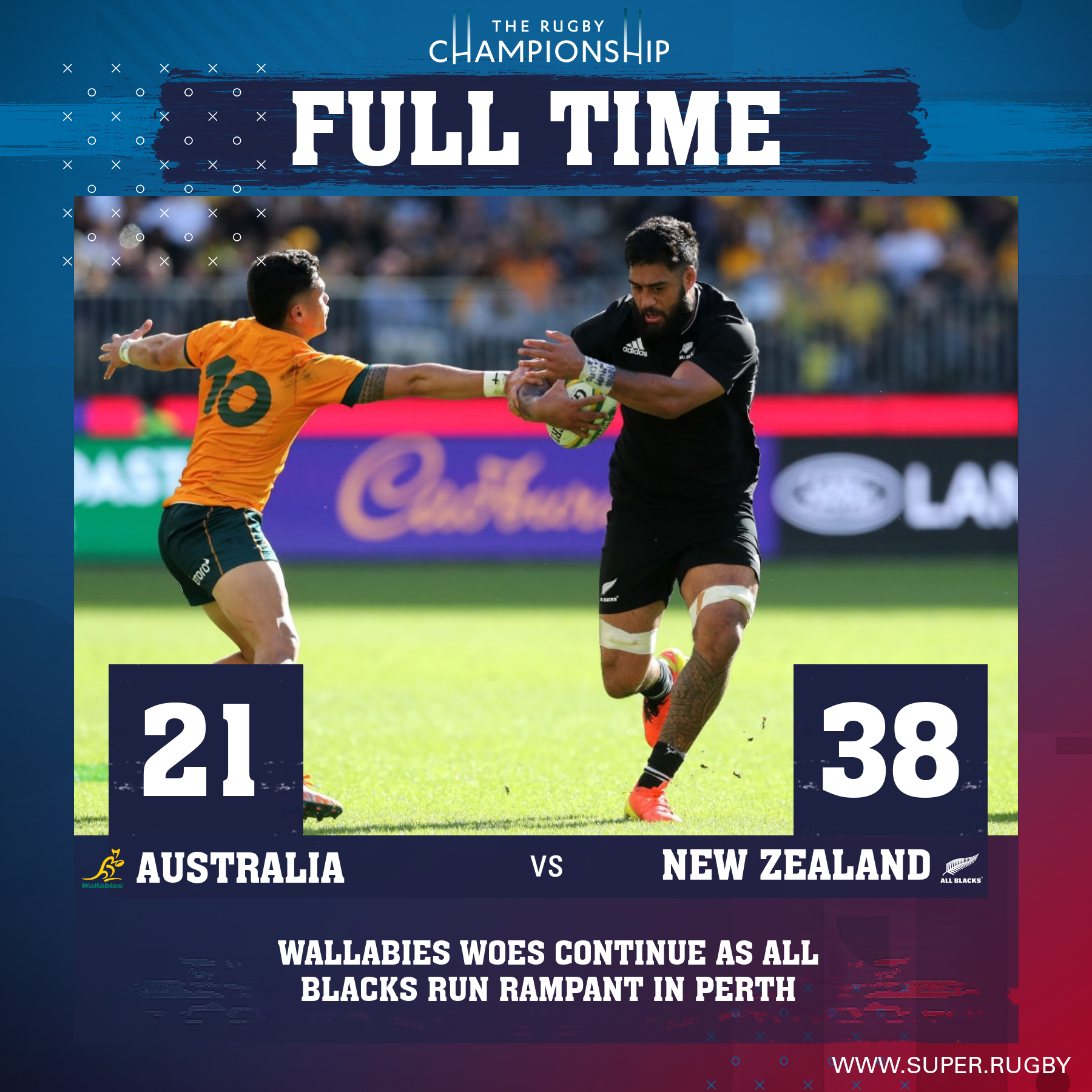