The Wallabies were full value for their 30-17 bonus-point victory over the Springboks in their Rugby Championship encounter in Brisbane on Saturday.

After claiming a narrow win over the world champions last week, the Wallabies continued to impress as they outscored the Boks four tries to one, with Len Ikitau and Marika Koroibete scoring two five-pointers apiece and Quade Cooper succeeding with two conversions and a couple of penalties.

For the Boks, Lukhanyo Am crossed the whitewash and Handre Pollard converted four penalties.

The Boks did most of the early attacking but had nothing to show for their efforts as they were met with a solid defensive effort by the home side. Things went pear-shaped for the visitors in the 12th minute when Faf de Klerk was yellow-carded for slapping the ball out of Nic White's hands at a ruck inside the Boks' 22.

It was a needless and cynical offence and Australia made full use of their numerical advantage with Ikitau scoring both his tries during the Bok scrumhalf's stint in the sin bin.

From the resulting penalty, the Wallabies attacked from a lineout and the ball was shifted quickly to their backs where Ikitau slipped past a couple of defenders before crossing for his first Test try.

Cooper's conversion attempt struck an upright before Pollard reduced the deficit with a penalty after Matt Philip infringed at a lineout. With a man down, South Africa's much-vaunted defence looked all at sea and midway through the half Tom Banks threw an inside pass to Marika Koroibete, who offloaded to Ikitau as he dotted down again.

De Klerk returned to the fields shortly after and the next 10 minutes were evenly contested with Pollard and Cooper trading penalties which meant the Wallabies were leading 15-6 by the half-hour mark.

In the 31st minute, Andrew Kellaway was penalised when he tackled Am in the air and Pollard narrowed the gap to six points when he slotted the resulting place-kick.

Soon after, Australia were reduced to 14 men when Lachlan Swinton was yellow-carded for a no-arms challenge on Duane Vermeulen. Initially, referee Matthew Carley wanted to issue a red as he thought Swinton's shoulder hit Vermeulen's head but television replays showed that the initial contact was with the Bok number eight's shoulder.

South Africa dominated the closing stages of the half but although they spent long periods inside Australia's territory, a 37th minute Pollard penalty was their only reward and the match was evenly poised at half-time with the Wallabies holding a 15-12 lead.

The Boks made a terrific start to the second period and from the restart they regathered possession before taking the ball through several phases inside Australia's half. They were soon on the attack on the edge of their hosts' 22 where De Klerk stabbed through a well-weighted grubber kick which Am gathered before scoring his try.

Although Pollard's conversion attempt was off target, the visitors' tails were up and they held the upper hand for the next 10 minutes before the Wallabies regained the lead courtesy of a Cooper penalty in the 50th minute.

After that, it was one-way traffic with Australia the dominant side while South Africa made several uncharacteristic unforced errors.

On the hour-mark, the Wallabies launched an attack on the blindside which caught the Boks by surprise with Taniela Tupou doing well to draw in Sbu Nkosi before getting a brilliant offload out to Koroibete, who outsprinted the cover defence before dotting down.

That boosted the home side's confidence and in the 68th minute, Koroibete went over for his second try after gliding through a gap in the Bok defence.

That sealed the home side's win although the world champions continued to fight but, in doing so, they lost their discipline and just before full-time Jasper Wiese was also sent to the sin bin after taking Samu Kerevi out illegally at a ruck. 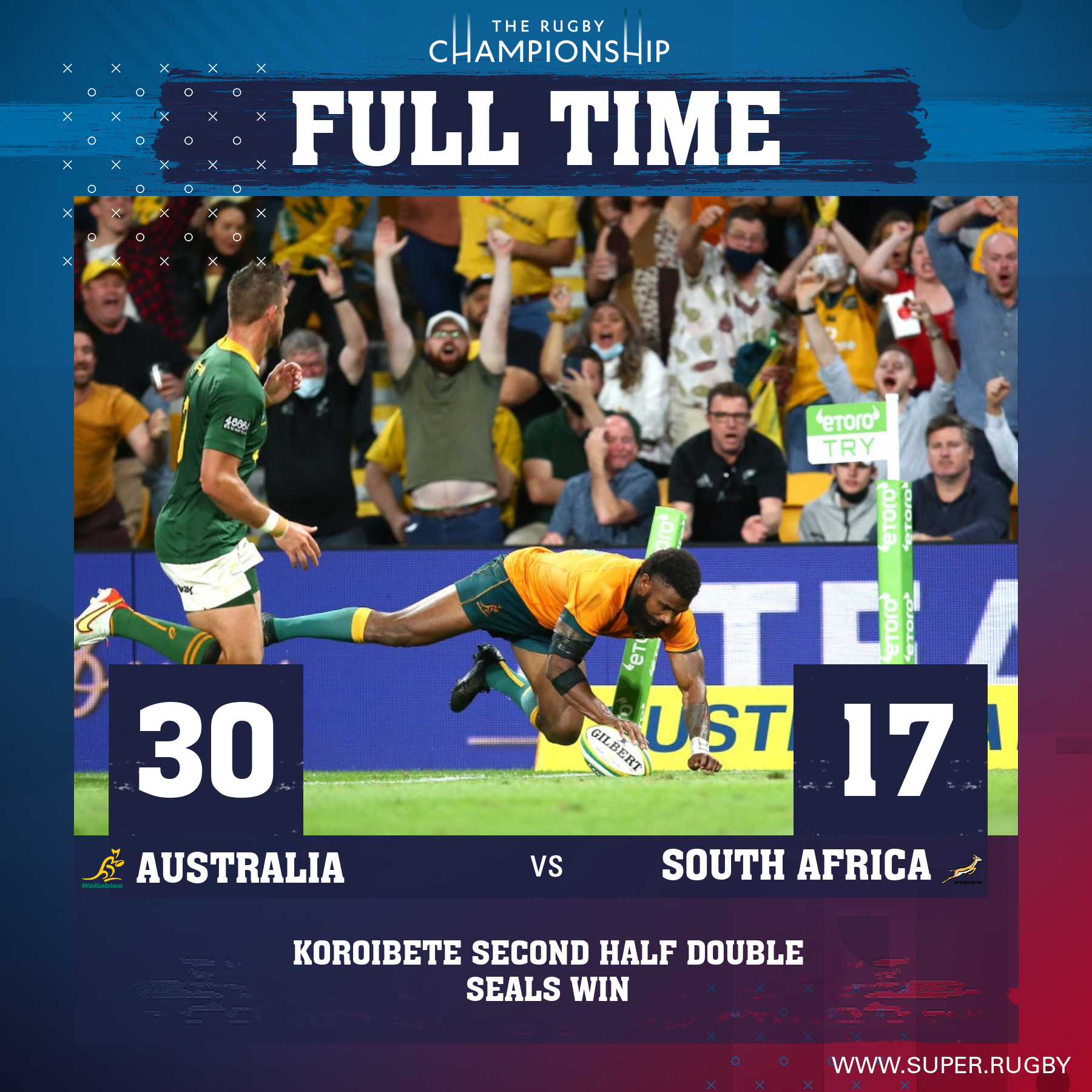