South Africa cruised to a comfortable 29-10 victory over Argentina at the Nelson Mandela Bay Stadium on Saturday to make it two wins from two in the Rugby Championship.

After a 32-12 victory over the same opponents in Port Elizabeth last week, the Springboks produced an assured performance as Argentina failed to impose themselves on proceedings. SA went into the half-time break with a 15-3 advantage and never looked back after the break, scoring two answered tries to put the result beyond any doubt.

The opening 40 minutes proved to be a stop-start affair as both sides gave away several penalties throughout the course of the half.

The Springboks eventually got on the board in the ninth minute, Handre Pollard calmly slotting a penalty after the referee pulled back play for penalty advantage after an offside play by Argentina.

And, after possession changed hands a few more times, the hosts were awarded a scrum penalty directly in front of goal, leaving Pollard with the easiest of attempts to stretch their lead to six points.

The Boks stretched further ahead four minutes later as Pollard again converted from right in front of goal after Argentina were penalised for a side entry at the maul.

The Pumas were quick to post a response after falling further behind, Domingo Miotti slotting a penalty kick after Jasper Wiese failed to release at the tackle.

However, the Springboks were quick to regain control of proceedings, restoring their nine-point advantage in the 29th minute as Pollard slotted another spot-kick after a penalty at the line-out.

Argentina were struggling to maintain their composure and gave away another penalty just after the restart, with Rodrigo Bruni sin-binned for failing to roll away from the ball after a tackle. Pollard lined up the penalty and made no mistake, handing the hosts a 15-3 advantage.

The visitors eventually won a penalty on the stroke of half-time after the Bok defence brought down Argentina's rolling maul, but the chance went to waste as Miotti failed to find the mark from about 50m out.

While South Africa had struggled to convert their dominance into tries in the first half, that was most certainly not the case after the half-time interval.

It took the hosts all of six minutes to bag their first try of the game, Willie le Roux setting up Makazole Mapimpi with a telling pass as the winger raced over the whitewash out wide. Pollard added the extras as South Africa began to turn the screws.

The Boks didn't take long to add to their advantage, though, Malcolm Marx got in on the act, dotting down at the back following a dominant maul. Pollard slotted the conversion to make it 3-29 with just under half an hour remaining.

However, South Africa were forced to prove their defensive prowess in the final stretch of the match as Argentina redoubled their efforts in a bid to salvage some pride.

The visitors earned a series of penalties in the final stretch of the match but were frustrated at every turn by a seemingly impenetrable defence.

But South Africa's defence was caught napping in injury time as Argentina eventually added to their first-half penalty, Pablo Matera powering his way over the line before Nicolas Sanchez added the extras. 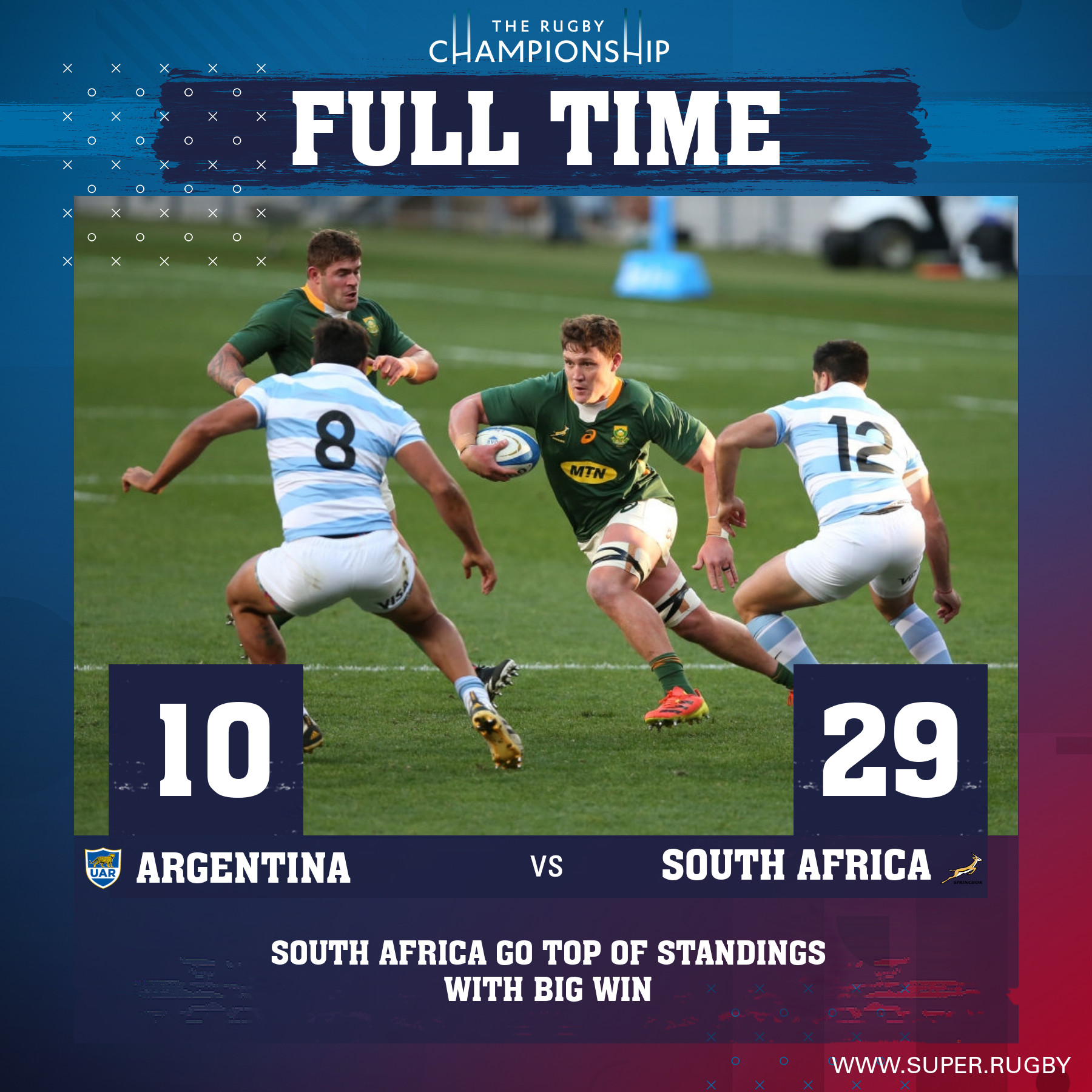