All Blacks and Wallabies Named For Perth

The teams for the rescheduled TRC match in Perth on Sunday 5 September have been announced by the head coaches Foster and Rennie.

There is just the one change from the All Blacks starting forward pack from the Bledisloe Cup-winning Test in Auckland last month, with lock Scott Barrett coming in for Samuel Whitelock in the second row. Patrick Tuipulotu has a tight groin which sees Tupou Vaa’i come onto the bench for his first Test of 2021. Ethan Blackadder also comes onto the bench as loose forward cover. Ardie Savea will captain the All Blacks for the first time at number eight.

In the backs, Brad Weber gets his second start at halfback in his 11th Test, with TJ Perenara to provide impact off the bench. Beauden Barrett is at first five-eighth [pictured left below] while Anton Lienert-Brown returns from injury at centre, outside David Havili. Rieko Ioane moves to the left wing, Will Jordan is on the right wing and Jordie Barrett is at fullback. Damian McKenzie and George Bridge are the other back reserves.

All Blacks Head Coach Ian Foster said: “We are ready, and the team is really determined to finish off this block of Tests against Australia with a top performance. We’ve had a really unique situation going into this Test, with quarantine back in New Zealand and a ‘soft’ quarantine here in Perth, but the work that has gone in preparing the players has been outstanding, so when the whistle goes on Sunday, we’ll be ready.”

Foster added: “In the forwards, we have picked a group that is most recently battle-hardened. A lot of them played in the first two Bledisloe Cup Tests, so it’s right to go with them in this Fortinet Rugby Championship Test.”

Commenting on the halfback selection, Foster said: “Brad has been with us through the Steinlager Series and coming into the Rugby Championship, we really wanted to build the nine combination, especially with Aaron not here and to complement TJ’s leadership and experience, so this is a great opportunity to put our faith in Brad to start the Test.”

Foster said the team was excited to be playing in front of a sell-out crowd in Perth this weekend.

“Perth has a great rugby culture and we know that there are a lot of Kiwis living here who will be at the game, so can’t wait to hear their support on Sunday.

“Covid has again forced so many changes this year and we especially think of cities like Dunedin and Wellington that have lost Test matches they had hoped and planned for, so it’s great to be able to celebrate having this Test match here in Perth,” he said. 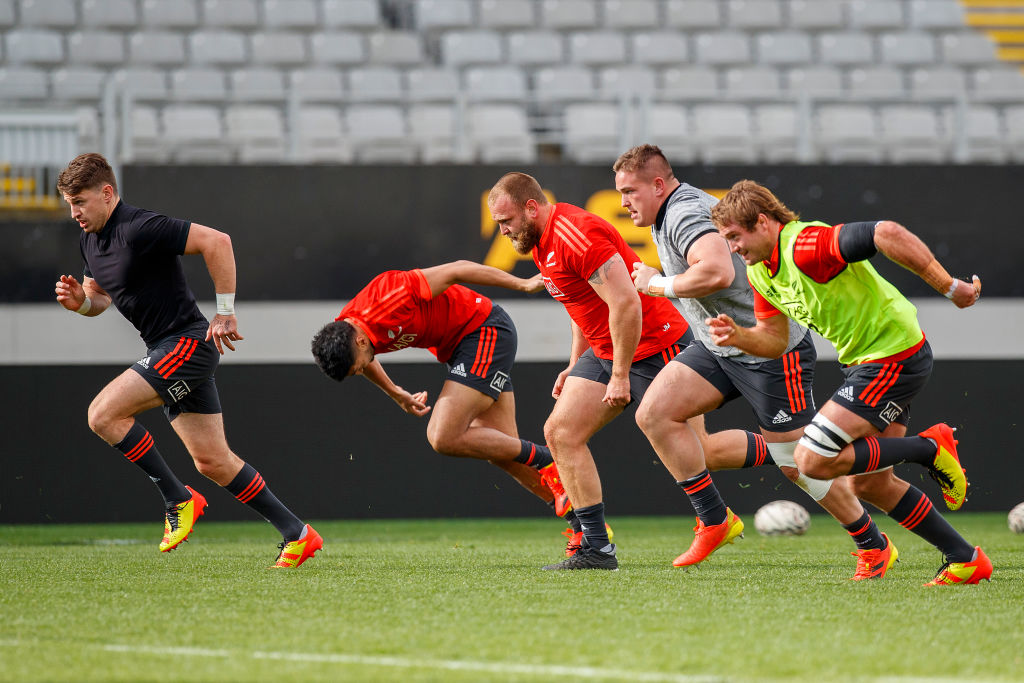 Wallabies coach Dave Rennie has selected Samu Kerevi at inside centre while Izack Rodda will make his return via the bench, in what will be their first appearances since the 2019 Rugby World Cup quarter-final in Japan nearly two years ago.

Folau Fainga’a is also set to play his first Test of 2021, named at hooker in an all-Brumbies front row alongside James Slipper and Allan Alaalatoa. The remaining forward pack is unchanged from Bledisloe Two with Matt Philip and Darcy Swain the second row combination, as the Wallabies look to win back-to-back Tests against New Zealand at home for the first time since 2008.

Michael Hooper will wear the number seven jersey and captain the side for the 58th time, just one behind the most decorated Wallabies captain, George Gregan.  He’s joined in the backrow by the abrasive Lachlan Swinton at blindside flanker and powerful Rob Valetini at number 8.

After impressive outings at Eden Park, Tate McDermott will again be the starting scrumhalf, partnering fellow youngster Noah Lolesio in the halves for the third straight Test.

Kerevi will combine with Len Ikitau in the midfield at Optus Stadium, the venue of the Wallabies highest-ever points tally against New Zealand in the 47-26 victory in 2019. The back three also remains unchanged with Marika Koroibete set to play his 39th Test for Australia on the right wing with the in-form Andrew Kellaway on the left edge and the elusive Tom Banks at fullback.

Lachlan Lonergan will play in his first Bledisloe Cup Test as the reserve hooker, with Angus Bell brought back into the side as the replacement loosehead prop alongside Taniela Tupou who will share the minutes at tighthead. Rodda will be the replacement lock, while Brumbies backrower Pete Samu is also selected for his first International appearance this year as the backrow cover for the Father’s Day clash.

Wallabies coach Dave Rennie said: “It’s great to be able to call on the experience of Samu and Izack this weekend with Hunter and Lukhan leaving the group to be with their partners in what’s a really exciting time of their lives. Both Samu and Izack have worked really hard since joining the group, been positive additions and have earned their opportunity to pull on the gold jersey on Sunday afternoon at Optus Stadium."

“The past three weeks in Perth have given us a chance to train hard on the field, refresh off it and connect with the local community. We are excited about the chance to be back on home soil and put in a performance that all of our supporters can be proud of.”