All Black ride scrum dominance to a 42–19 win over Ireland in the first Steinlager Series Test at Eden Park on Saturday.

Exposing the Irish front row Achilles' heel since arriving in New Zealand, the All Blacks made good their desire to right the record after their defeat by Ireland in Dublin last year.

It was an emphatic display by the six members of the front row and the scrum effort was emphasised when Test debutant No8 Pita Gus Sowakula ran hard from the base of a 70th minute scrum to mark the occasion with a try.

But in a contest that was bone-crushing on the part of both sides, and impressive for the persistence of the Irish in attempting to open gaps, it was the superior ability of the All Blacks to take their chances that contributed to the final margin.

Ireland tried, at least eight times, without luck to get the ball over the All Blacks' line to force a closer contest. They had a 58 percent advantage in possession and 60 percent in territory.

A late try to replacement second five-eighths Bundee Aki was too late to make a difference and the game finished with the All Blacks defence holding out under pressure again.

After going to the break 5-28 down, Ireland made a strong start to the second half, forcing the All Blacks to concede penalties before the ball was moved to centre Garry Ringrose to pull points back to 12-28.

But Savea led the response when the All Blacks used the lineout to set up ball through a Scott Barrett drive. When moved Savea, in midfield, like a centre, took a gap, stepped a defender, all at speed, and ran in his second try.

Ireland were then twice denied tries by the TMO, the first when replacement five-eighths Joey Carberry lost control of the ball as he attempted to place it for the try, then from a penalty in earlier play, flanker Josh van der Flier also knocked the ball on diving for the try.

Then, after the All Blacks cleared the line, only to have a carried back kick called for Ireland to fail to control the lineout, allowing more clearance for the home team.

A piece of Brodie Retallick lineout magic, contesting the Irish throw and then winning the resulting maul call for a scrum – his last act of the game before being substituted. It was that sort of night for the visitors.

It took 20 minutes for the All Blacks to shake out the rust, and that was done courtesy of typical Irish tackling and unrelenting waves of attack. Ireland struck first after the All Blacks conceded a penalty which Ireland used to kick into the 22m area.

Eventually they wore the All Blacks' defensive line down to create space on the right flank for wing Keith Earls to cross out wide in the fifth minute.

More mistakes kept the All Blacks pinned before the power of the All Blacks scrum returned the pressure to the Irish and allowed more time, and ball, for the home team to make their play. 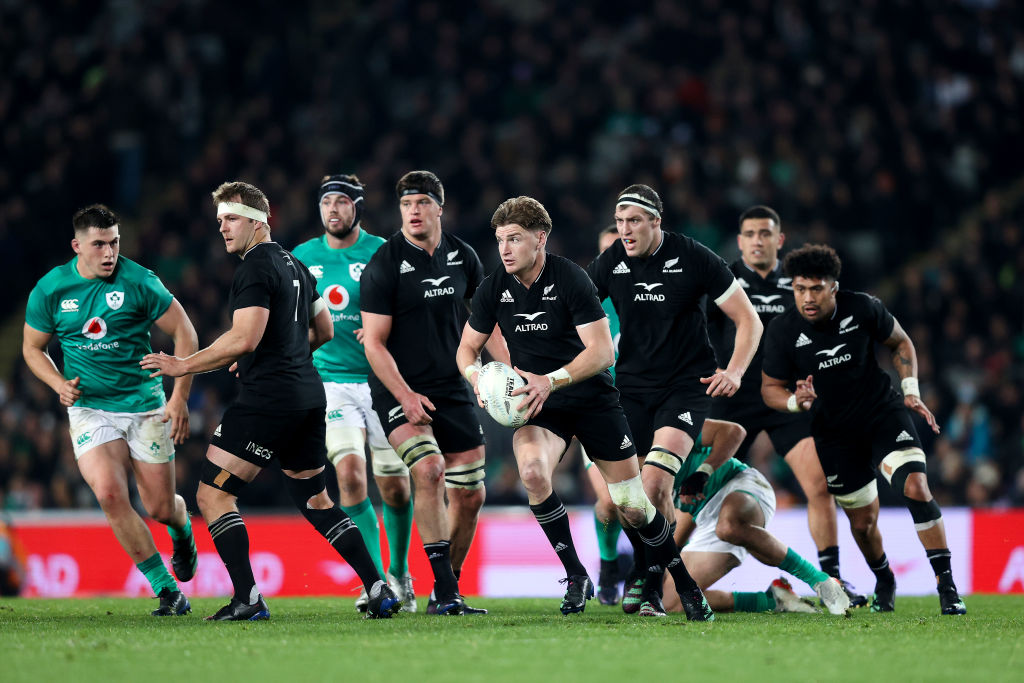 Wing Leicester Fainga'anuku, who had an impressive debut, was put into space and went close to scoring on the left, but was grounded just short. Halfback Aaron Smith threw one of his passes across the face of the All Blacks backs, and it was fullback Jordie Barrett who took the ball to crash through in the 20th minute.

Ireland continued to work their plays, moving the ball swiftly, but unable to get the line straightened as often as they liked. Eventually the pressure told, and a dropped ball, in the 29th minute, was swooped upon by right wing Sevu Reece. In a 75-metre run he never looked like being headed.

While the Irish contemplated the damage they looked downfield to see captain Sexton leaving the field injured.

The All Blacks were starting to run more like a well-serviced engine and after another strong period with the ball in hand as props George Bower and Ofa Tuungafasi and Retallick made ground, the fast ball the All Blacks thrive upon saw first five-eighths Beauden Barrett slip a grubber kick through for second five-eighths Quinn Tupaea to run through and secure a 35th minute try.

Almost from the restart, the All Blacks were back on attack and it was Smith who seized upon a turnover from an Irish lineout play in their territory, and took a gap around the ruck, kicked ahead and beat Earls to tap the ball sideways.

As it bobbled around in-goal two Irishmen failed to cover the bouncing ball and Savea got a touch to it for the fourth All Blacks try of the half.

The Irish endeavour was reflected in their slight possession advantage but the halftime score was reflected by territorial advantage of 55 percent the All Blacks enjoyed.