All Blacks Dominate Fiji in Hamilton

The All Blacks were more ruthless in the Second Test and an improved defence limited Fiji's attacking opportunities.
Demonstrating improved intent in the tackle, breakdown and support, the All Blacks over-rode the surprise element Fiji enjoyed in the first Steinlager Series Test to take the second Test 60-13 in Hamilton.

From the outset there was greater sting and purpose applied in the tackle by the All Blacks who several times forced Fijians back, superior play at the breakdown and domination of the set-pieces, and that pressure denied Fiji their front foot play that was so impressive a week ago.

Only one try was conceded to highlight the All Blacks' defensive improvement while nine tries scored rewarded improved continuity across the park.

Replacement hooker Samisoni Taukei'aho celebrated his debut with two tries, the first from an orthodox lineout drive and the second from a lineout variation where he ran down the sideline to score in the final act of the game. Wing Sevu Reece completed a hat-trick of tries within the first 35 minutes.

Flanker Ardie Savea's return produced immediate effect while blindside flanker Akira Ioane and No8 Luke Jacobson combined to provide a base that allowed the All Blacks to assert their dominance in the loose and set-piece play.

That caused Fiji to concede penalties under the pressure to turn back the tide and the All Blacks took charge.

They had taken their time to settle, conceding penalties of their own in their desire to shut down the Fijian sorties close to their source, one of which was converted by first five-eighths Ben Volavola for the opening points of the game.

But once they found their rhythm their approach paid off in the 14th minute when Savea, who had already made some pile-driving tackles, was at halfback in the lineout. He was fed the ball, ran laterally and linked with second five-eighths David Havili. He stepped inside his marker, drew the fullback and slipped a backhand pass to left wing Sevu Reece who ran in for the opening try.

When first five-eighths Richie Mo'unga landed a penalty goal, the ball was dropped from the restart by Fiji fullback Kini Murimurivalu. The All Blacks applied the power through the resulting scrum with Jacobson controlling the ball before halfback Aaron Smith went blind where Mo'unga drew the defence to feed Reece in for his second try in the 27th minute.

Penalties conceded became an early problem for Fiji and they were given a warning in the 34th minute. Fiji captain and lock Leone Nakarawa called his troops in for a confab and once completed Mo'unga took a tap penalty and ran at the line. Ioane attempted to dive over the goal-line but, with Fiji disorganised, the ball was fired across the ground where Reece was unchallenged to run in his hat-trick of tries.

Moments later Reece followed hard on a kick out of the All Blacks' half to force a lineout inside the 22m area. New Zealand took advantage of Nakarawa's absence to power the ball ahead through Ioane, prop George Bower and with the line in reach it was Savea who picked up the ball to drive low over the line to score. New Zealand took a 29-6 lead to the break.

More handling issues occurred from the restart when wing Nemani Nadolo dropped the ball cold. The All Blacks took advantage of the seven-man scrum with right wing Will Jordan running in from the flank to slice through in midfield to score, but injuring a hamstring in the process. 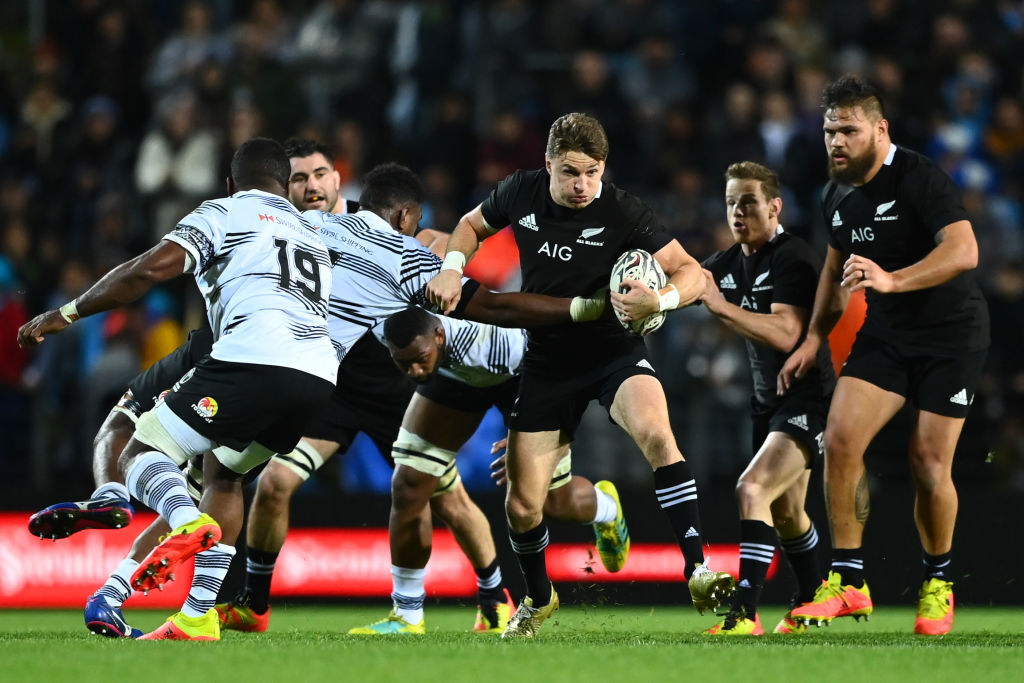 Some solace came for Fiji after the All Blacks were penalised at the restart. They kicked to the corner, put their drive to effect and it was prop Peni Ravai who was squeezed out of the maul to go over for the try.

Yet another penalty conceded out from their line saw Fiji suffer as the All Blacks' scrum provided the foundation for Jacobson to run from the base to link with Mo'unga who put replacement wing Rieko Ioane on the outside of Nadolo for another try.

The bench effect took after about 25 minutes with replacement lock Brodie Retallick winning his first lineout to set up a driving maul which saw Taukei'aho work his way to drop over for a try. Props Ethan de Groot and Angus Ta'avao produced some effective continuity play.

Fullback Damian McKenzie, who had been on the end of some bone-jarring tackles all game, provided a demonstration of his defensive class when Volavola made an intercept and headed for the goal-line. But, running on the tangent, he cut him down just short of the line, and then got back up and won a penalty when contesting the breakdown.

It was a redemption effort and another step forward for the side as they look ahead to the Bledisloe Cup in three weeks time.