All Blacks Edge England at Twickenham

Down 0-15 after 23 minutes the All Blacks dug deep to dominate the second half and keep England scoreless in the final hour to win 16-15 at Twickenham.

It was a controlled All Blacks display in wet conditions with lock Sam Whitelock outstanding in carrying ball off rucks and keeping the side driving forward, with good support from flanker Ardie Savea, while first five-eighths Beauden Barrett ran the ball at the line more often than usual while also kicking his first Test dropped goal and the match-winning penalty goal.

They also managed to upset the England lineout with lock Brodie Retallick several times getting up to contest the ball, usually against Maro Itoje, and that frustrated the home side who were looking for quality ball to set their chances around the field.

New Zealand denied them that outlet for long periods and that proved crucial in the final outcome as England showed when the spirit moved them they were well capable of moving the ball with effect, especially when wing Johnny May was running the ball back and setting up rucks.

England thought they had the game won after replacement lock Courtney Laws charged down an attempted kick by All Blacks replacement halfback TJ Perenara allowing outstanding flanker Sam Underhill to claim the try when turning Barrett inside out. However, the TMO Marius Jonker was called on and it was ruled Laws had been offside in the original chargedown.

England made a sensational start as a result of the All Blacks failing to control the start to the game and from the first scrum, their heavyweights punched over the advantage line to set up the first try. Halfback Ben Youngs saw wing Rieko Ioane had been sucked off the sideline and he flung a wide pass to wing Chris Ashton who scored.

Then, from a ninth minute overthrow at a lineout resulting from a scrum penalty on New Zealand's line, England secured the ball and Farrell put over a dropped goal.

New Zealand probed without effect as they looked to work into position but were turned back by the England kicking game where halfback Ben Youngs was pinpoint in his accuracy whereas All Blacks inside backs Aaron Smith and Beauden Barrett were unable to put England under similar pressure.

When Barrett was penalised for fielding a knocked on ball from a high kick, England kicked to the corner and launched a massive lineout drive with backs rushing in to add to the shove and it was hooker Dylan Hartley who was in position to score in the 23rd minute.

Managing continuity of possession at last, the All Blacks mounted a long period of patient build-up with impetus finally created by Ioane cutting back infield and linking with centre Jack Goodhue carrying play forward.

England were penalised and captain Kieran Read called for a scrum 15m out from the line. Replacement second five-eighths Ryan Crotty charged into the goalmouth to set up the ruck. Read and Retallick each had charges at the line before the ball emerged for Barrett to slip an inside ball to fullback Damian McKenzie who scythed between two defenders to score in the 38th minute.

Farrell kicked the restart well over the sideline and the All Blacks mounted more pressure from the scrum and when England's defenders were penalised after the halftime hooter, Barrett kicked the penalty goal.

New Zealand made a strong start to the second half, getting straight onto attack and while England's defence remained strong, Barrett snapped over the first dropped goal of his Test career to pull them within two points.

Retaining more possession, the All Blacks began to probe and England were caught offside, allowing Barrett to land a 59th minute penalty goal to gain the lead for the first time in the game.

When another desperate England attack foundered when a knock-on resulted from a bid to flick the ball on, New Zealand secured the scrum, kept a tight rein on the ball and snuffed out England's chances to claim the win. 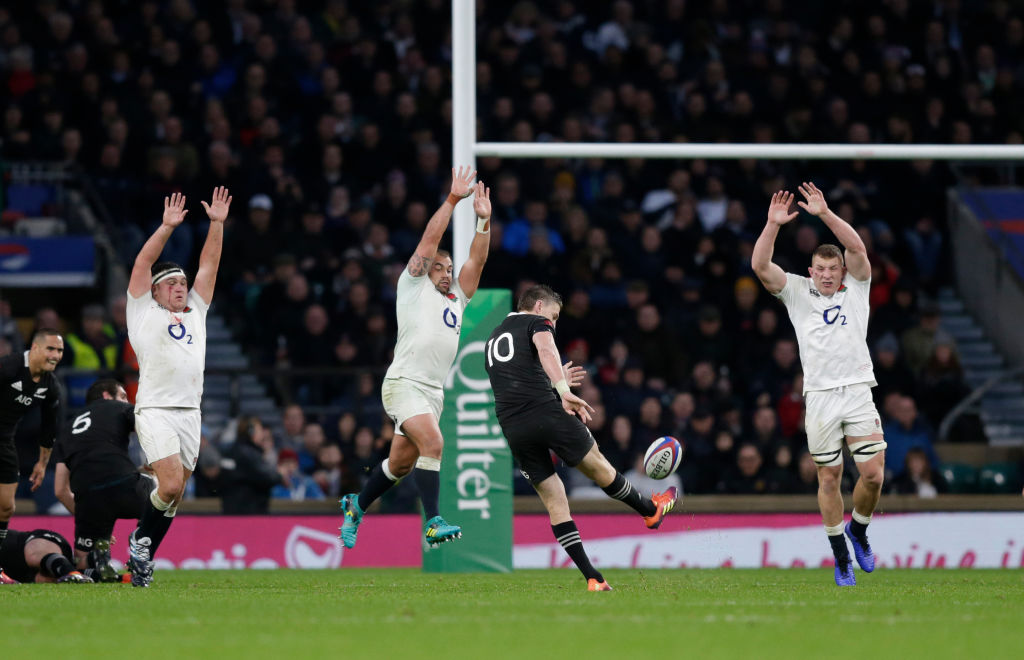