The All Blacks retained the Bledisloe Cup with a big win over the Wallabies while the Boks continued RWC preparation with victory over Pumas.

Steadfast in application, resolute on the tackle and utterly committed to denying every chance possible, the All Blacks turned on their power to rebuff the Wallabies' efforts to end 16 years of Bledisloe Cup misery on the occasion of coach Steve Hansen's 100th Test at the helm of the side.

It was the first time since 2012, also at Eden Park, Australia had been held scoreless in Bledisloe Cup games.

Tighthead prop Nepo Laulala demonstrated why the selectors had put faith in him by applying the pressure through the scrum. Lock Sam Whitelock had the pressure applied from management and responded while hooker Dane Coles was to the fore in the tackles on the wider fringes.

Flankers Ardie Savea and Sam Cane contested the breakdowns and supported captain Kieran Read in the defensive department and the Australians could only reflect on the way passes that stuck a week earlier were knocked loose in the face of outstanding defence this time around.

When the breakthrough came, in the 28th minute, it was through a tackle made by wing George Bridge on fullback Kurtley Beale that resulted in his pass going behind wing Reece Hodge. He failed to control the ball and Mo'unga was on it quickly to run 40 metres to score.

Three minutes later, first five-eighths Christian Lealiifano, who had already missed two kickable penalty goal chances, lobbed an ill-placed kick down the middle of the field. Fullback Beauden Barrett had all the time in the world to size up his options. He chose to put his speed to use, running hard towards the left wing where he fed Bridge into space. He made ground down the sideline, stretching the defence, and then finding halfback Aaron Smith in field for the pass and the All Blacks' second try.

Hooker Dane Coles got involved in a scuffle after a superb breakdown win by flanker Sam Cane and then infringed with a high tackle minutes later with an off the ball tackle on halfback Nic White. New Zealand had been awarded a penalty from the drive, but it was over-turned after a video assessment and Coles was sin-binned.

The Wallabies could not take any advantage from the yellow card and when Coles returned tthe All Blacks set a scrum in front of the Wallabies posts with Savea packing at No.8. He ran wide and fed inside to Kieran Read. From the ruck the ball was moved for second five-eighths Sonny Bill Williams to charge at the line with momentum allowing him to score in the 45th minute.

It was the 66th minute before the All Blacks scored again, the result of replacement fullback Jordie Barrett's kick through, which wing Sevu Reece kicked on and then won the race for the touch down. Three minutes from the end it was Savea's turnover in the Australia 22 that created the chance for Bridge to score to give the All Blacks their 36-0 margin. 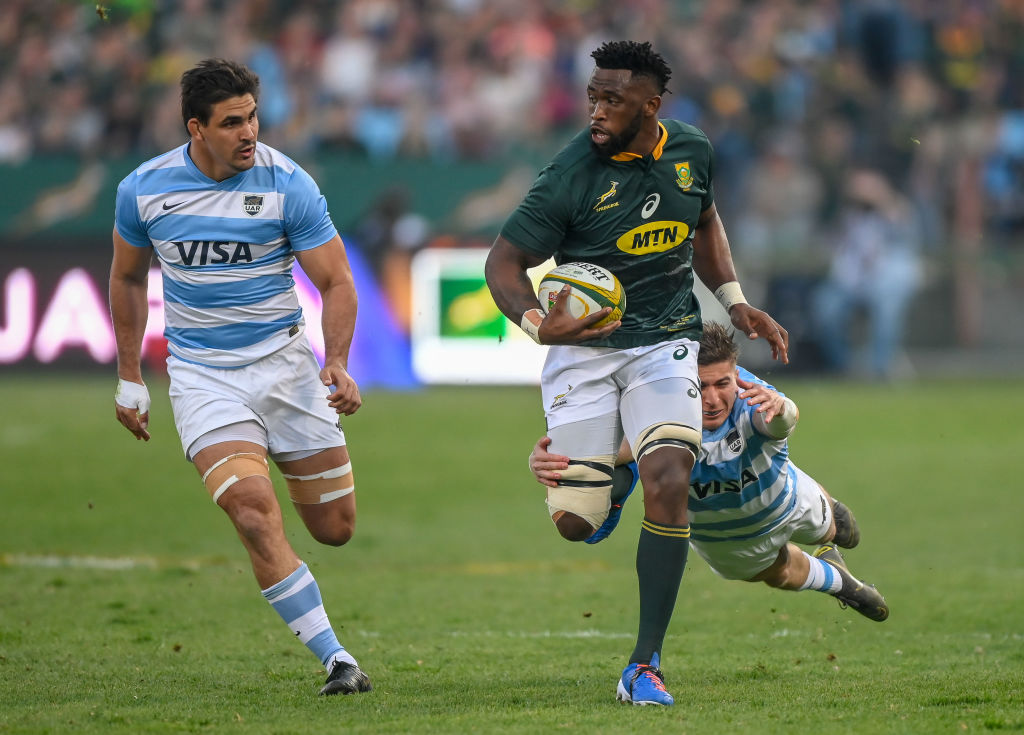 South Africa continued with their impressive recent form when they beat Argentina 24-18 in a World Cup warm-up match in Pretoria on Saturday.

In a tightly contested affair, momentum between the two sides ebbed and flowed throughout and the result was in the balance until the game’s closing stages. The home side did enough to clinch the result, however, after both sides scored two tries apiece.

Springbok head coach Rassie Erasmus was delighted his 2019 Springbok squad continued on a trajectory of progress following a 24-18 victory over Argentina at Loftus Versfeld in Pretoria.

Sbu Nkosi scored both the Boks’ tries, while Elton Jantjies kicked five from six as he contributed a conversion and four penalty goals.

Erasmus admitted that the result was a case of winning ugly, but that the game had gone pretty much to expectations.

“All week, I knew it was going to be a grind and that it wasn’t going to be a free-flowing game. Argentina could have beaten New Zealand this season with that maul at the end, and they lost to Australia by six and they could have won that game as well, and I knew they were going to come for us."

“They were very well prepared and played so well but it’s nice to learn when you’re winning. We had some things confirmed and learnt other things about combinations."

“We did some good things and some bad things. The bad things were giving away stupid penalties and the intercept pass – and letting them off the hook at times.

Erasmus confirmed he would take a group of 37 players to Bloemfontein on Sunday for a final camp during which he would finalise his squad. He also said he was delighted with the performance of Siya Kolisi, who was starting his first test of the season.

“We wanted to get Siya off after 30 minutes and see how he would last but with the injury to Marcell Coetzee we had to change our plans,” said Erasmus.

“At halftime Siya said he was feeling great and that he wanted to go 70, but then he was struggling after 50 minutes. We’ll work really hard on his conditioning and get him right.”