The All Blacks are tough to beat at home but their away try scoring record is also very impressive...

The Tri Nations campaign kicks off this weekend as the All Blacks take on the Wallabies in the third Bledisloe Cup instalment of 2020. The first game of the Tri Nations series will take place at Sydney’s ANZ Stadium, a ground the New Zealanders are on the precipice of achieving a significant milestone.

The All Blacks have scored 70 tries at the Olympic venue, their second most at any Test ground outside New Zealand. Only at the Sydney Cricket Ground (71) have they scored more on their travels, having scored 50+ tries at just three other such Test venues (64 – Murrayfield, 57 – Twickenham and 56 – Millennium Stadium). Although, the All Blacks have already scored more Test points (587) at ANZ Stadium than they have at any other overseas venue; only at Twickenham (531) have they also scored 500+.

Dan Carter’s 131 points at the Millennium Stadium is the most by any New Zealand player at an overseas Test venue; indeed, it is one of two such places Carter has a haul of 100+ points (126 at Twickenham). Of the New Zealand squad named for the Tri Nations, Richie Mo’unga’s 48 points (2 tries, 16 conversions, 2 penalty goals) at the Ajinomoto Stadium in Tokyo leads the way in this category. However, the next best tally is Beauden Barrett’s record at ANZ Stadium (46 points – 2 tries, 15 conversions, 2 penalty goals). 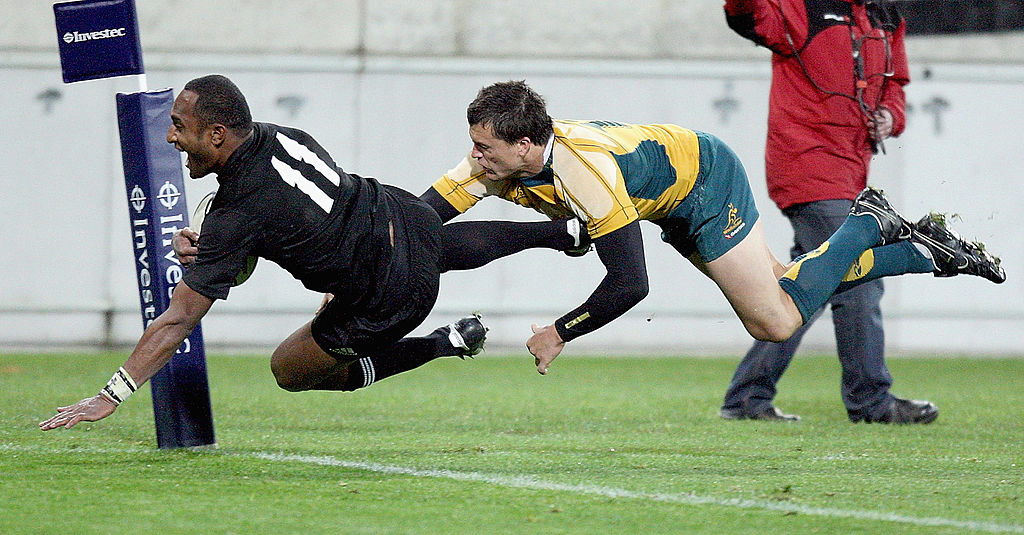 Joe Rokocoko scores at ANZ Stadium in 2017 against Wallabies

Two New Zealand players share the record for the most tries for the All Blacks at an overseas Test venue. Joe Rokocoko (ANZ Stadium) and Julian Savea (Millennium Stadium) have scored seven each at those respective grounds. Marc Ellis (6 at Free State Stadium) and Mils Muliaina (6 at Marvel Stadium) are the only other All Blacks players to score more than five Test tries at a venue outside New Zealand.

The Wallabies have kept the All Blacks scoreless just once in a Test (11-0, 27 June 1910), although that game was contested in Sydney at the Sydney Cricket Ground; can the Australians keep the All Blacks from reaching the record?