All Blacks Out-Muscle Wales in Cardiff

It was a contest for a while but All Blacks put foot down in second half to domiante 55-23.

All Blacks forward power and ruthlessness extinguised Welsh hopes as the pack laid the foundation for a memorable 55-23 win over Wales at the Principality Stadium in Cardiff.

Although they felt they had a chance after the inconsistency of All Blacks' results in 2022, Wales joined their 32 preceding sides since their last win in 1953 in failing in their task. It was the 10th Test in succession that the All Blacks had scored more than 33 points against Wales

This was a Test where the All Blacks dominated up front, controlled the loose exchanges at the vital moments, tackled with effect, and demonstrated the confidence seen in their Eden Park Test against Australia.

Man of the match No8 Ardie Savea was consistently lively with support from flankers Dalton Papali'i, who shone in the open, and Shannon Frizell in taking the ball up. Lock and captain Sam Whitelock controlled the lineout and was prominent in the pick-and-go plays the side unleashed with effect.

Great support from props Ethan de Groot and Tyrel Lomax both in the handling play and in their scrummaging demonstrated how much they have developed this year.

Halfback Aaron Smith, in his record-breaking effort as the most capped All Blacks back, scored two tries. The first was a brilliant solo effort while first five-eighths Richie Mo'unga controlled the flow of the game, even when Wales were able to apply some pressure, while his cover tackle on New Zealander Gareth Anscombe as he seemed try bound, was stunning.

New Zealand showed their intent from the outset, achieving a level of continuity rarely seen this season and achieved a 22-13 lead by halftime.

While Wales opened the second half scoring with an Anscombe penalty goal, but the All Blacks responded immediately courtesy of Smith who, playing under penalty advantage, made the most of an All Blacks lineout win, to pick his way past the early cover, and then switch back on the break to run in a try to mark his record-breaking appearance as the most capped All Blacks halfback.

Mo'unga then wasn't able to control a lob kick to the All Blacks goalmouth by Welsh halfback Tomos Williams. He contested the catch with first five-eighths Rhys Priestland and when the ball dropped free, Wales flanker Justin Tipuric managed to secure the ball to score.

Then, yet again, from the restart plays, Wales conceded a penalty, out from the posts. That allowed Savea to throw one of his outrageous dummies before slipping the ball to Smith who scored his second. 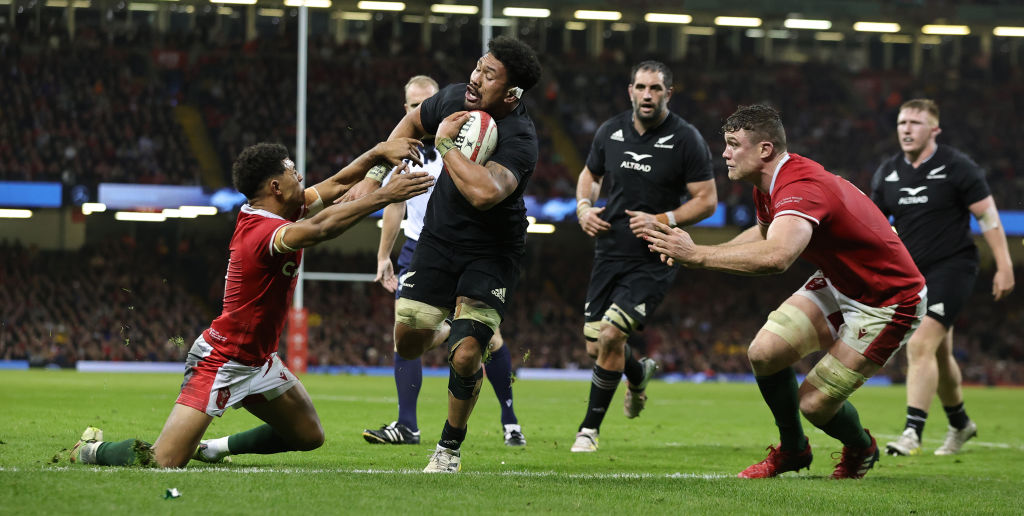 All Black No.8 Ardie Savea put in another towering performance against Wales

Into the final quarter, rejuvenated by their substitutes, the All Blacks returned to their forwards for some determined driving and when the space was opened, it was Savea who dived over for deserved reward. He was followed five minutes from the end by Jordie Barrett who was fed into a wide gap by brother Beauden, and then after a last-minute penalty conceded by Wales, the lineout drive produced the half-century when replacement hooker Samisoni Taukei'aho scored a trademark try.

Making their best start of the season, the All Blacks led 17-0 after the first quarter. Early pressure was applied through Smith, who twice caught his opposite number Tomos Williams at scrums, and Savea whose two early ruck turnovers provided great momentum.

Continuing with the double effect hooker Codie Taylor scored their first two tries in the 10th and 18th minutes.

The first coming after Mo'unga ran from Savea's turnover. When the ball was moved Papali'i broke through the Welsh backline. The pack took over with several pick-and-goes in the 22m area before Taylor scored.

Then, after significant driving play again inspired by strong running from Savea, and his tap penalty, the ball was taken to the line and Taylor completed the play.

A penalty conceded by the All Blacks in their 22 in the 24th minute saw Wales use their lineout and it was left-wing  on debut Rio Dyer who positioned himself outside centre George North who had drawn the defence to open a gap for Dyer to score.

Halfback Nick Tompkins broke deep into the All Blacks 22 and when New Zealand conceded a penalty, Anscombe pulled three points back.

That was a prelude for more application of forward power from the All Blacks who again built on momentum from Savea's ability to put his leg drive to use. Under penalty advantage close to the line Mo'unga lobbed a ball to the right wing where second five-eighths Jordie Barrett used his height advantage to secure the ball area of Dyer to score.

Traditionally, the final quarter has seen the All Blacks' fitness tell, and it proved the case again for a win that will rank high in the satisfaction stakes.