Fiji produced one of their best performances in recent years to make the All Blacks work hard for First Test victory.

Fiji produced their finest performance in Tests against the All Blacks, and while beaten 57–23 in the Steinlager Series first Test at Forsyth Barr Stadium in Dunedin on Saturday, their effort proved as competitive as coach Vern Cotter promised.

It was certain to have lifted hearts at home in the midst of their Covid crisis, one of their pre-game goals.

The driving lineout maul was the dominant feature of the night, from both sides.

While the All Blacks gained the early lineout advantage to underpin their subsequent success, Fiji made their own contribution to an outstanding occasion with their own successful variations which was all the more impressive given their unsettled preparation due to Covid.

Fiji closed the margin in the middle stages of the second half, especially as each side lost a man to the sin-bin. But it also provided the chance for replacement hooker Dane Coles to cash in with a hat-trick of lineout maul tries, all of them inter-changeable.

Then, five minutes from the end, after superb runs by replacement lock Sam Whitelock, and centre Rieko Ioane, Coles was on hand after Fiji gained a turnover out from their line, only for the ball to be untidily presented with Coles like a rampant seagull securing the ball for his fourth try – the first time by an All Black forward in Test rugby.

Just how much the set-piece would be a factor in the game was clear from the first chance the All Blacks had close to the Fiji line from a lineout penalty. While No8 Albert Tuisue did his best to get over the top of the All Blacks maul, the ploy was seen by Smith who got the ball from hooker Codie Taylor.

Second five-eighths David Havili was at first receiver and passed out to Beauden Barrett who fed wing George Bridge, joining from the blindside, and his quick transfer provided time and space for fullback Jordie Barrett to run in the opening try.

While Fiji first five-eighths Ben Volavola bookended the try with two penalty goals, the All Blacks took advantage of Fijian indiscipline at the breakdown to secure another kick to the corner. This time they worked a move at the front with Taylor working towards the line. Patience at the ruck, saw the ball driven forward before it was released when Havili found the way through to score by the posts. 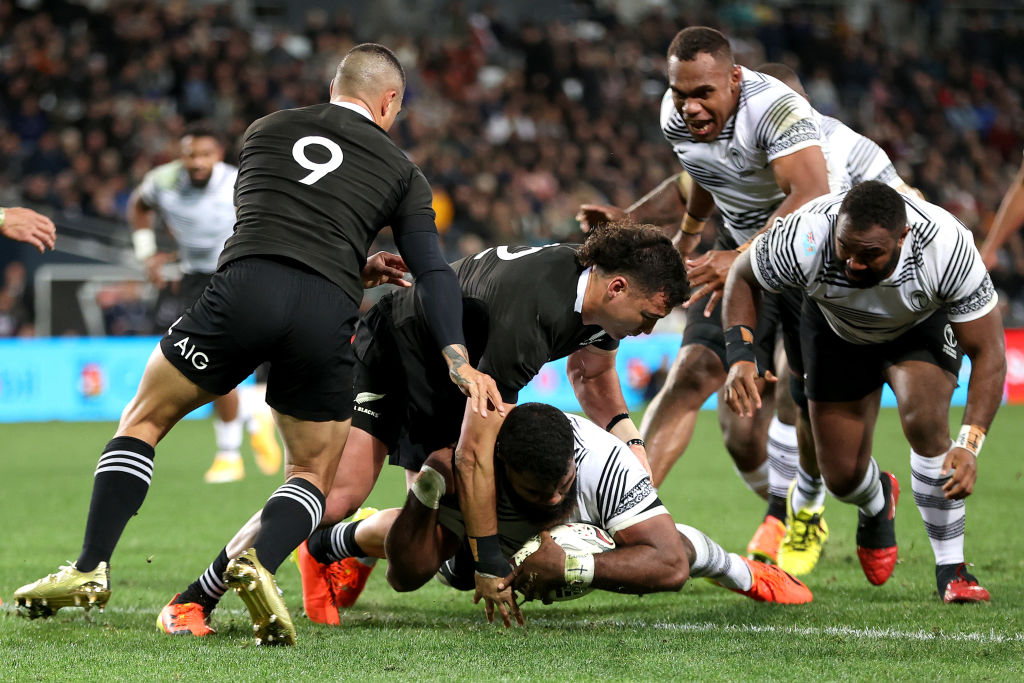 Three minutes later, another lineout came after flanker Ethan Blackadder secured a turnover and a penalty which produced a more traditional move, but it didn't prevent Havili making a clean break through the defence to score again.

A defensive lineout in the 24th minute wasn't so impressive as No8 Hoskins Sotutu lost the ball and Fiji mounted the first prolonged assault at the line but at their first attempt they weren't able to secure the try under advantage. When taking the penalty, they kicked to touch and from the drive the power and speed with which they executed their play saw Tuisue score [see photo above].

Fijian blindside flanker Johnny Dyer came into the limelight with some outstanding turnover work that several times lessened the pressure on his side. That was seen to best effect in the last minute of the half when Sotutu broke from a five-metre scrum, opting to go alone when the pass outside was on, only to go to ground with Dyer securing the ball to see the ball cleared from the penalty and halftime taken.

The defensive effort was highlighted by captain and second five-eighths Levani Botia's stunning tackle on Damian McKenzie while he was substituting for Beauden Barrett who was receiving treatment for a cut to his head.

A late charge, early in the second half, on Havili resulted in a penalty from which the All Blacks mounted a surge off the back and from a midfield ruck, the ball was moved back to the sideline where wing George Bridge got a perfect pass from Havili to score.

But Fiji then unveiled a lineout ploy of their own with lock Temo Mayanavanua taking the ball and running to the front where hooker Samuel Matavesi charged down the sideline and while tackled in the corner he had got a pass away to flanker Mesulame Kunavula who ducked under tackles to score.

Sevu Reece made Fiji pay for an indifferent downfield kick when he charged 50m down the middle of the field to link with lock Patrick Tuipulotu and Ethan Blackadder who was caught just short of the line.

But Fiji's fullback Kini Murimurivalu infringed at the breakdown and was penalised and sin-binned which the All Blacks used to advantage to control the lineout drive which replacement hooker Dane Coles used to secure the try.

However, Fiji had reward for their determined response with the All Blacks hit with a penalty try after Havili brought down a maul just short of the line.

Blackadder carried play towards the Fiji line in the 68th minute with a strong run. When the ball emerged from the ruck, Beauden Barrett threw a long ball to the right wing where replacement wing Will Jordan took the pass to score before Coles stole the final moments with tries in the 72nd and 75th minutes.

If an uncompromising Test was what the All Blacks wanted, they got it.