All Blacks Score Century Against Tonga

The All Blacks equalled their highest score, 102-0, against Tonga in the opening game of the Steinlager Series at Mt Smart Stadium, Auckland.

The All Blacks dominance was highlighted by 16 unanswered tries. Wing Will Jordan, playing his third Test, had a big night out scoring five tries, one short of Marc Ellis' All Blacks record, and equal with fellow right wing Jeff Wilson.

Given the intensity of rugby the New Zealanders have played for two years, and with their reduced Rugby Championship last year, it was hardly a surprising outcome against a Tongan side that had played no Test rugby.

From the All Blacks' point of view, there were signs of rustiness, mis-directed passes, handling issues and mis-timing, all elements that might be associated with the first Test of a campaign.

The portents for Tonga were poor from the kick-off. Fullback Damian McKenzie crossed for a try within a minute 20 seconds. Flanker Dalton Papalii followed after four minutes, and halfback Brad Weber after six.

Each was the result of direct running, twice No8 Luke Jacobson carried ball with effect, while Papalii played a key hand in the third.

When Jordan was fed into a gap after the restart, he had players inside and out to choose. He went with debutant second five-eighths Quinn Tupaea. He set sail for the line, but was dragged down for hooker Dane Coles to tiptoe along the sideline and in-pass for Jordan who finished off the try he had started.

Tonga finding touch in the 15th minute allowed the All Blacks to throw in quickly, unchallenged. They moved the ball left and back to the right where tighthead prop Angus Ta'avao showed his ability in the open to step into space and then find Chiefs' teammate Weber to run in his second try.

Halfback Sonatulu Takulua's box kicks were ineffective when no one pursued them.

The All Blacks feasted. From one Jordan passed long infield and even when Tonga managed to scramble the ball over the sideline, the time they took to form a lineout allowed the All Blacks to throw quickly with Jordan taking advantage of Mo'unga's running to score his second.

Just when required, after some moments by Tonga hard on attack around the 30-minute mark, the All Black scrum upped the ante on a Tongan feed five metres from the New Zealand line. Prop Karl Tu'inukuafe turned on the power and the All Blacks won a penalty to clear the line. 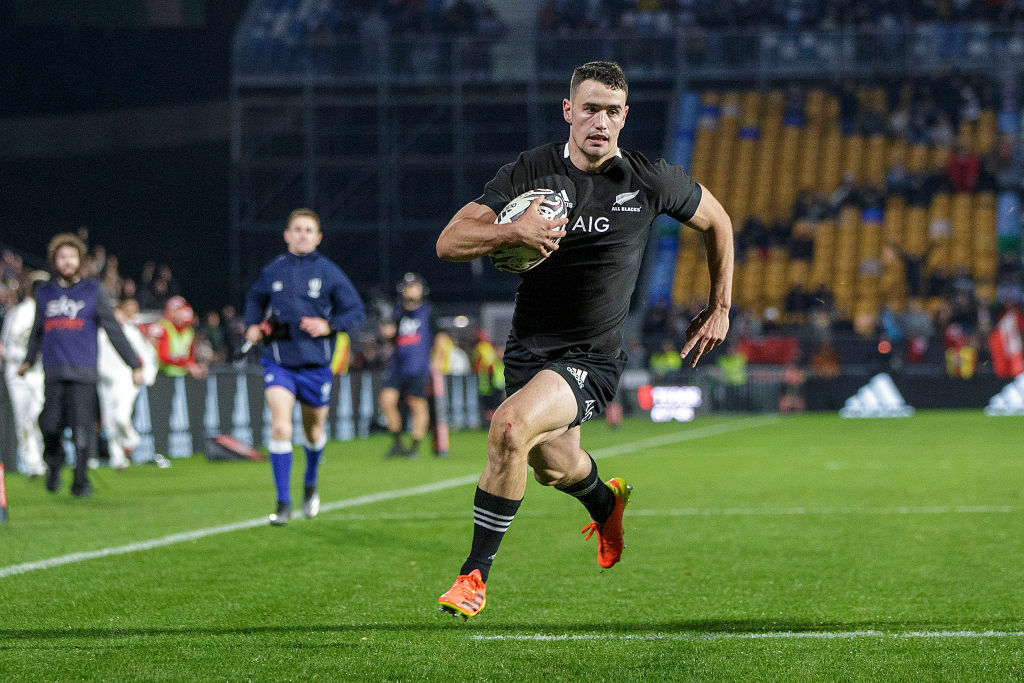 Wing Will Jordan crossed for five tries against Tonga

More scrum power in midfield provided the foundation for Paplii's second try, a scorching run along the left sideline.

It didn't get any better in the second half. After two minutes, after a superb kick to the Tongan defensive corner by McKenzie, hooker Dane Coles out of the lineout read the attempted long throw, took it and set his pack in motion with No8 Luke Jacobson going over beside the posts.

McKenzie was in the action again in the 47th minute. The All Blacks replaced their front row to immediate effect as captain Sam Whitelock called for scrums at every opportunity, rather than kicking to the corners. The ball was moved swiftly to the outside with McKenzie taking the defence out of the equation to allow Jordan to cap a snappy move with his third try.

Beauden Barrett marked his return, when substituting Mo'unga, who had just scored from a turnover. Barrett chipped a kick over the Tongan backline which was taken by Tupaea and fed outside to centre Rieko Ioane to score.

Patrick Tuipulotu, who replaced Scott Barrett, got on the scoreboard with four minutes remaining and the last act was delivered from a turnover after a Tongan penalty when wing George Bridge scored.