All Blacks Smash Italy in Rome

Putting 10 tries on Italy, the All Blacks bounced back from their Ireland loss by taking a 66-3 win in Rome with new wing Jordie Barrett leading the assault when running in four tries.

Fullback Damian McKenzie added another three on what proved the perfect season finale with many of the side's lesser lights taking advantage of their opportunity to keep the home side tryless, and never looking like getting over the line in slippery conditions.

Skipper Kieran Read gave a clear demonstration of leadership from before the game when leading the haka and then getting into the action with a series of plays in midfield, and in lineout work, to cast a masterful impact over the game.

Similarly, hooker Dane Coles who unleashed months of frustration in a free-flowing display of his fine all-round skills, finding the outside channels especially productive in linking play in several of the All Blacks' tries.

Able to play at pace, the All Blacks carved up the Italian defence and when there were issues getting through, the grubber kick proved effective in turning the defence around.

Jordie Barrett dispelled any concerns there may have been about his ability to play on the wing with a confident display while taking advantage of their chances for action were lock Patrick Tuipulotu and flanker Vaea Fifita while the midfield pairing of Ngani Laumape and Anton Lienert-Brown were highly effective.

Quickly settling into their game, from a quick lineout, the All Blacks moved the ball to Tuipulotu in midfield and then turned the ball back to fellow lock Scott Barrett, who had Coles doubling around him to feed right wing Jordie Barrett. Running along the sideline he made the pass inside to halfback TJ Perenara who was unchallenged to run in a seventh minute try.

Turnover ball was secured by Coles on the back foot in the 12th minute, but when ball was released it was Read standing off who slipped a short ball to Tuipulotu running on the angle and into space, provided perfect ball for fullback Damian McKenzie to run in under the posts.

Referee Andrew Brace was caught in a collision with players in a tackle situation and had to be replaced by Pascal Gauzere in the 23rd minute.

Speed of execution after a scrum penalty allowed the All Blacks to claim a lineout in Italy's 22m area. Lienert-Brown cut back to set up the ruck, and Beauden Barrett slipped a left-footed kick through with McKenzie winning the chase to the touchdown.

Ball manipulation after flanker Ardie Savea turned the ball over from a rare Italian sortie in the All Blacks' 22m area, saw the patient probing finally creating an opening with Coles on the outside to work with McKenzie to put Jordie Barrett away down the right flank to score in the 31st minute.

Consecutive penalties in the Italy 22m area saw the All Blacks pack take control to maul the ball. On the second occasion when cleared, Beauden Barrett took the advancing Italian defence line out of play by chipping a high kick to the corner where brother Jordie soared high over Italy fullback and fellow Taranaki product Jayden Hayward to score his second try after the halftime siren.

Striking immediately after halftime, the All Blacks sucked in the Italian defence and it was Read, in midfield, who took the tackle and made the offload to Laumape who ran back on a slight angle to punch into space for the try.

Two minutes later in the 45th minute, Italy attempted a long throw over their lineout only to see Beauden Barrett read it perfectly to take the ball and run 50m for the try.

Having started to introduce their substitutes, the All Blacks worked a quick lineout which took play back into Italy's 22m area with the home side deflecting the ball into touch. From the lineout, replacement first five-eighths Richie Mo'unga slipped a kick through and McKenzie score his third to bring up the half-century for the All Blacks.

Jordie Barrett, also completed a hat-trick, his last coming courtesy of a superb kick through off his left foot by replacement hooker Nathan Harris seven minutes from the end of the game.

Barrett was in again as the All Blacks moved the ball after the final hooter and with a Laumape long pass finding Mo'unga whose quick pass gave the big wing the chance to run in his fourth. 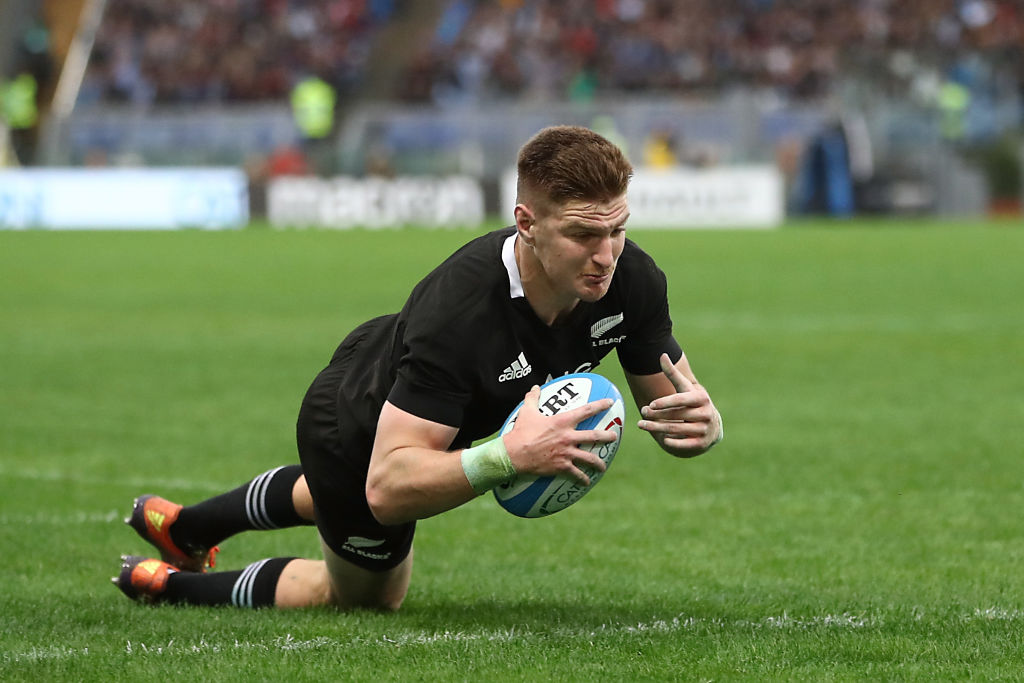