All Blacks Smash Under Strength Wales

New Zealand kick off their year-end Europe tour with a comfortable 54-16 win over Wales in Cardiff with Beauden Barrett leading the way.

Fourth-quarter pressure has long been an issue for Wales teams playing the All Blacks and it proved the case again as New Zealand ran up a 54–16 win at the Principality Stadium on Sunday (NZT).

It was ironic that Wales scored their only try in the 60th minute, but all that did was fire the All Blacks' scoring machine which raced in four tries, in those final 17 minutes.

The All Blacks were rampant after a patient dissembling of the Welsh game that was dominated by an early desire to take on the All Blacks' defence before resorting to a kicking game that too often turned over hard-won ball allowing New Zealand to weave its magic.

Kicking to wing Will Jordan's wing especially proved costly for Wales halfback Tomos Williams in the 53rd minute. Jordan took the ball, ran it back, beat two defenders before kicking ahead, winning the race to the bouncing ball to score his 16th try in his 11th Test.

It was such a sensational, and effective, play it was made to look easy by Jordan.

Then, after Wales had scored to get back within 12 points, New Zealand returned the favour when a lineout move looked to go astray only for flanker Dalton Papalii to realise what had happened before taking the chance himself to score.

Then, two minutes later in the 65th minute, Jordan secured another aerial ball to set up a chance which saw Jordie Barrett put a grubber kick through. Replacement wing Sevu Reece secured the ball, fed Rieko Ioane off the ground and he found the dynamic No.8 Ardie Savea [pictured below] running the sideline before in-passing to Reece for the try.

Anton Lienert-Brown followed with another in the 70th minute.

As if conceding a third minute intercept try to first five-eighth Beauden Barrett wasn't enough, he made them suffer again with another, a 78th minute intercept which left him on 39 Test tries – sixth on the All Blacks list. It capped off a man of the match performance for Barrett in his 100th Test.

It was an unfortunate night for the home team. They lost the iconic leader and world Test cap record holder Alun Wyn Jones in the 18th minute to an apparent recurrence of his shoulder injury. They also lost flanker Ross Moriarty when he was involved in an incident which cost All Blacks lock Nepo Laulala 10 minutes in the sin-bin.

Moriarty, the ball-carrier, ducked low and was knocked sideways in a tackle attempt by flanker Ethan Blackadder. Laulala was on the spot and with little time to wrap his arms, he was pinged with referee Mathieu Reynaud sending him to the bin. Yet, there was little else that, in the time involved, Laulala could have done.

However, Wales, for the second time within moments, kicked to the corner only to lose the ball and allow the All Blacks to clear. 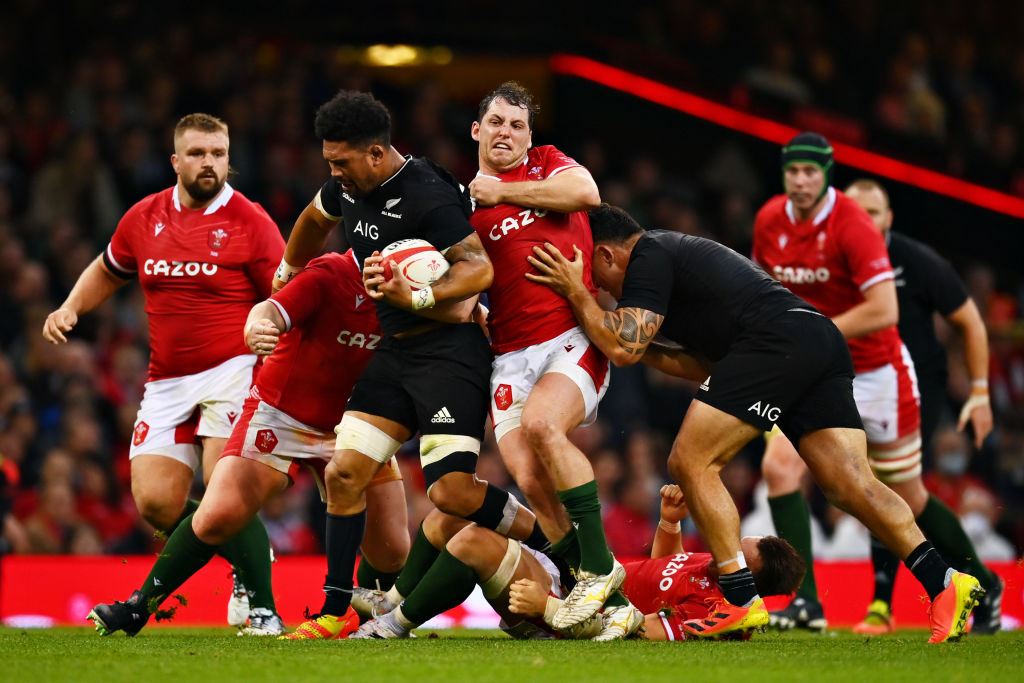 The failure to make the most of their chances was the problem for Wales whereas the All Blacks made the most of their visits to the Welsh 22m area. Taking penalty goal chances on offer the ticked the scoreboard over with the only misses being a 53m attempt by fullback Jordie Barrett while Laulala also missed a try in the 24th minute when making the slightest of knock-ons.

The All Blacks scrum won two first half penalties while the lineout made the most of Wales' failure to secure the ball.

By comparison, the All Blacks looked to work their moves from the lineout and in the 33rd minute they scored their second after strong runs by Jordie Barrett and Blackadder with No8 Ardie Savea breaking the defensive line, as he did every time he touched the ball, to slip the ball to halfback T J Perenara who scored.

Where Wales impressed was with their young flanker Taine Basham. Competitive at the breakdown he secured ball while he also showed his running skill with one effective break that highlighted the best Wales move of the half.

They had reward at last at the three-quarter mark from a lineout after a penalty kick to the corner. Replacement five-eighths Rhys Priestland slipped a grubber kick to the in-goal and second five-eighths Johnny Williams won the race to score.