New Zealand continued their dominance over Australia by sealing an emphatic 57-22 victory in their Rugby Championship clash in Auckland on Saturday.

The result is a momentous one for the All Blacks as it is a record score against the Wallabies on home soil and it means they have retained the Bledisloe Cup for the 20th successive year, with Australia last lifting the famous trophy in 2001.

In a fast-paced and entertaining Test, the All Blacks were deserved winners as they outscored the Wallabies eight tries to three, with Codie Taylor (2), Rieko Ioane, Ardie Savea, Brodie Retallick, Sevu Reece, Will Jordan and David Havili all crossing the whitewash.

Richie Mo'unga contributed 10 points courtesy of five conversions while Beauden Barrett also succeeded with a couple of two-pointers off the kicking tee and Damian McKenzie slotted a monster penalty from nearly 60 metres out.

For the Wallabies, Andrew Kellaway scored a brace of tries while Tate McDermott also dotted down and Noah Lolesio added a penalty and two conversions.

New Zealand had the better of the early exchanges and opened the scoring in the fourth minute when Ioane intercepted a pass from Matt To'omua on the edge of the home side's 22 and the outside centre outpaced the cover defence before crossing for a try.

That score did not deter the visitors, who were soon on the attack inside the All Blacks' 22 where Kellaway stepped past Damian McKenzie on his way over the try-line.

The next 10 minutes saw plenty of attacking from both sides but a combination of handling errors and solid defence meant neither side would score points during that period.

New Zealand regained the initiative in the 23rd minute when Akira Ioane launched a stunning counterattack from deep inside his half. He did well to beat a couple of defenders and was soon close to Australia's 22 where he offloaded to McKenzie, who got a pass out to Retallick and the big second-row scored under the posts.

That score boosted the All Blacks as 10 minutes later they had the Wallabies on the back foot as their forwards set up several rucks inside the visitors' 22 before Savea powered his way over the whitewash from close quarters.

The Wallabies needed a response and after Lolesio added a penalty in the 31st minute Rob Valetini put them on the front foot when he made a break off the back off a scrum deep inside New Zealand's 22 late in the half. He still had work to do but did well to offload to McDermott, who crossed for a converted try which meant Australia were still in the game with the score 21-15 in New Zealand's favour at the interval.

The Wallabies made a bright start to the second half and they received a shot in the arm soon after the restart when Ardie Savea was yellow carded for a cynical defensive foul close to his try-line.

Despite that setback, the All Blacks were next to score when Aaron Smith tore the visitors' defence to shreds with a sniping break close to the halfway line and he did well to throw an inside pass to Taylor, who crossed for his side's fourth try.

In the 53rd minute, McKenzie left his stamp on this Test when he stepped up to land his long-range penalty from just close to his 10-metre line. That score seemed to knock the wind out of Australia's sails as New Zealand hammered home their dominance with quickfire tries from Reece and Taylor which meant they held a comfortable 41-15 lead by the hour-mark.

They were far from done though as five minutes later Jordan found himself in the clear out wide before crossing in the right-hand corner and although the Wallabies struck back when Kellaway went over for his second try, the All Blacks clinched the result when Havili scored his five-pointer in the game's dying moments. 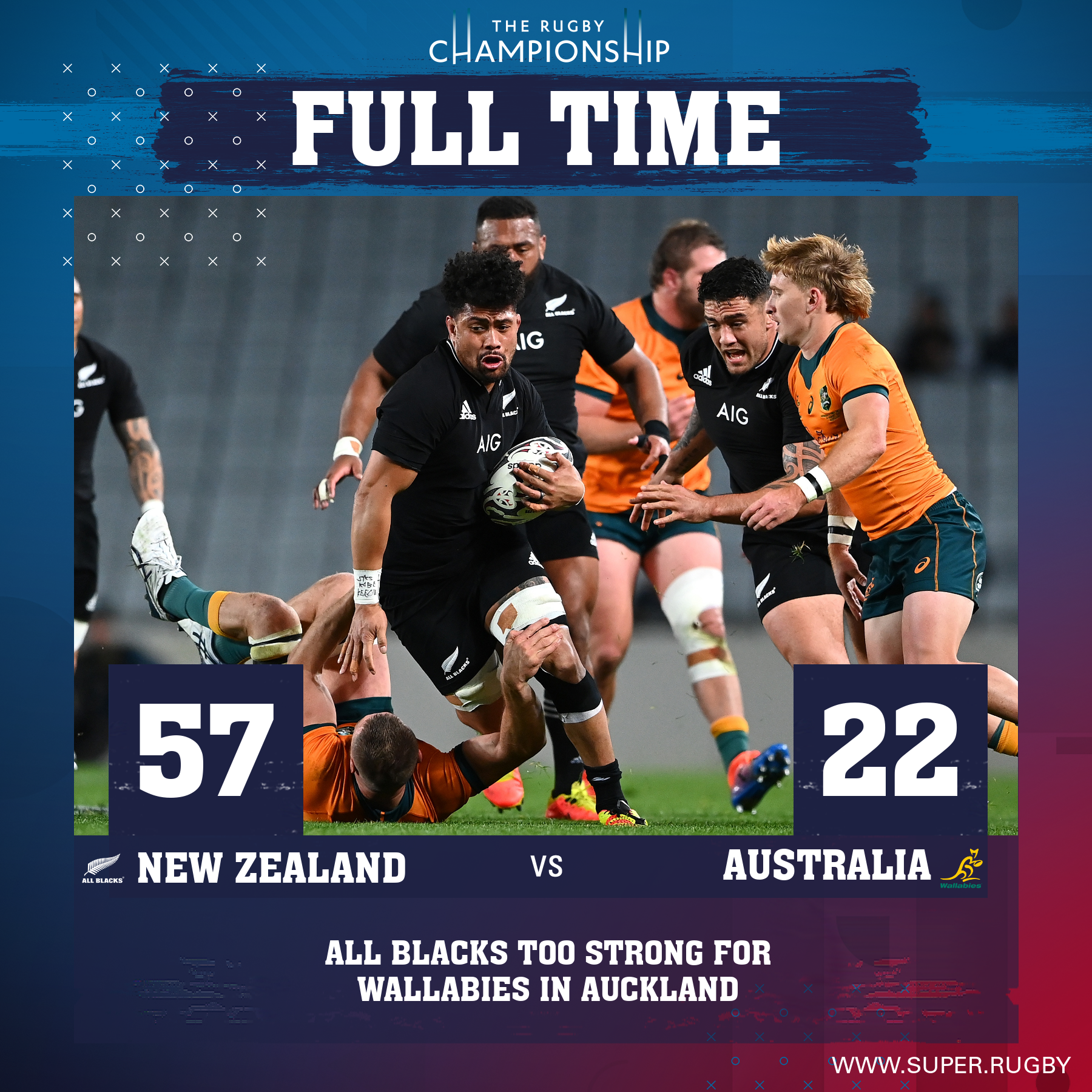