Burying the ghosts of recent Tests past, the All Blacks sealed a Rugby World Cup semi-final place by handing Ireland a 46-14 quarter-final defeat in Tokyo.

Given all the intensity of games between the sides since 2016, Ireland were allowed no chance in a game that the All Blacks dominated from the outset.

They will now meet England in their semifinal after they earlier dealt to Australia.

Ireland captain and hooker Rory Best, who is retiring from Test rugby, said the All Blacks had been fantastic and had not allowed Ireland to get on the front foot. He paid tribute to coach Joe Schmidt who is also retiring saying he had taken Best's rugby to a new level.

Concerns that the abandoned game against Italy might affect the side proved unfounded and it seemed all that had done was heighten the side's appetite for action as they ran in seven tries to two, one of them a contentious penalty try, for Ireland.

Flanker Ardie Savea, No 8 Kieran Read, prop Joe Moody led the way with outstanding contributions while flanker Sam Cane, who was replaced at halftime with a wrist injury, had a fine first half on defence with 12 tackles heading the side.

New Zealand gave Ireland little room to settle in their style of game, taking the ball to them with constant pick-and-goes putting pressure on the defence and opening spaces out wide.

Ireland's kicking game was ineffectual in the face of the pressure while the efforts to move ball often resulted in handling problems and their lack of attacking options allowed the All Blacks to dominate in defence.

Scoring three tries without response demonstrated how much the All Blacks dominated the first half.

Their first try was a classic of the front five doing the set-up and freeing up chances for the backs. Lock Sam Whitelock, handling several times, Read and Moody all did some strong driving work to get the ball to the line and when the chance presented itself halfback Aaron Smith was able to snipe around the ruck to score handy to the posts 13 minutes after the start.

Smith, who completely outplayed his much vaunted rival Connor Murry, was over again six minutes later after a superb set piece move which saw right wing Sevu Reece racing across from his wing outside centre Jack Goodhue flick him a perfect pass.

It put him into space and able to give left wing George Bridge room on the left. He took the ball to line and from the ruck, Smith was played without the ball but under advantage he took the ball and was over in the corner.

New Zealand's defensive pressure was consistent throughout the half and bore more fruit when Reece forced an error from first five-eighths Johnny Sexton who was attempting to pass to fullback Rob Kearney. However, the ball dropped free for Mo'unga to kick ahead and with the ball staying in the field of play, Barrett following up only needed to control the ball, which he did, to take the All Blacks out to a 22-0 lead after 31 minutes. 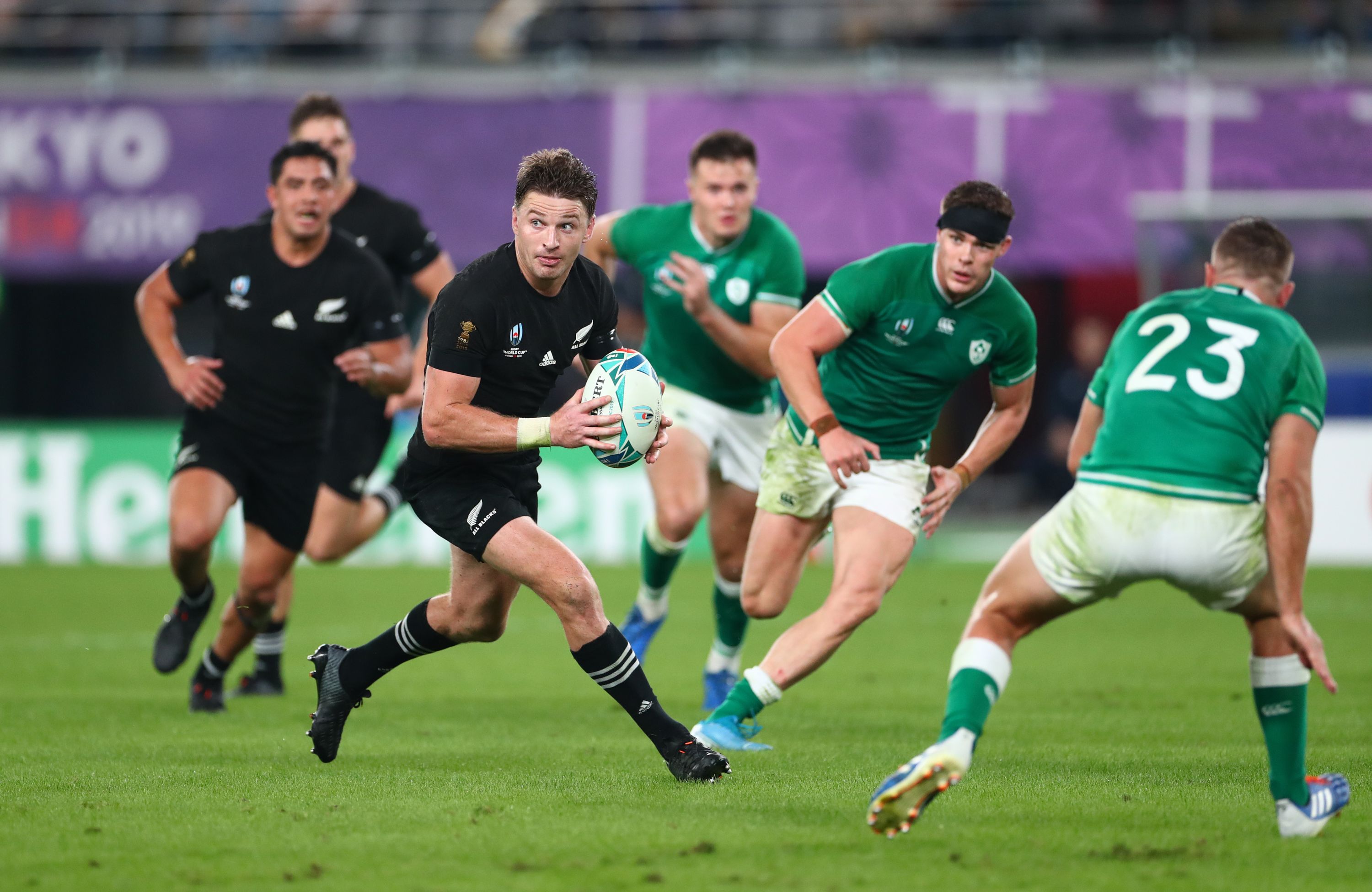 Straight onto the attack in the second half, New Zealand set up camp in Ireland's 22m and the forwards took control and when Savea, Moody and Whitelock carried ball, it was when Read broke close to the goalposts and then passed up a ball to hooker Codie Taylor in the 47th minute that New Zealand extended the lead to 29-0.

That allowed the bench to be utilised and flanker Matt Todd's support resulted in a 60th minute try after a superb All Blacks lineout drive set up the chance for Mo'unga to put in a cross kick to Reece's wing. He took the ball and cut back in to take the tackle. From the ruck, replacement halfback TJ Perenara flicked the ball to Todd who barged over.

Ireland finally had some reward in the 68th minute. It came after second five-eighths Robbie Henshaw had missed grounding a ball kicked into the in-goal by replacement five-eighths Joey Carbery. A scrum was taken under penalty advantage, and while it was in danger of disintegrating, No 8 CJ Stander who linked with Henshaw, who got in under the posts.

But the All Blacks went straight back on attack and while Ireland held the ball, Savea turned the ball over in a ruck, ran for 20 metres before offloading to replacement hooker Dane Coles. He then had Bridge in support and he took his pass and scored.

Ireland secured another, a penalty try, when Todd was ruled to have been offside and prevented in Irish player placing the ball on the base of the goalpost. It appeared an extraordinary decision given Todd had been behind the goal-line at the start of the movement and was falling in front of the goalpost.

The All Blacks had the final say however, when forcing a five-metre scrum two minutes from the end and with Beauden Barrett flinging a long ball to the right wing where brother and replacement wing Jordie Barrett scoring the side's seventh try.