All Change for Boks in Series Decider against Wales

Springbok coach Jacques Nienaber made 11 changes to his starting lineup for the Series decider against Wales in Cape Town.

Eben Etzebeth earns his 100th Test cap and Bongi Mbonambi [pictured below] his 50th. Etzebeth, who made his Springbok debut in June 2012 against England, will become the seventh player to reach the significant career milestone, following in the footsteps of Victor Matfield, Bryan Habana, Tendai Mtawarira, John Smit, Jean de Villiers and Percy Montgomery.

Nienaber named a new-look backline featuring the versatile Damian Willemse at fullback, with Cheslin Kolbe and Makazole Mapimpi back on the wings, while the regular centre pairing of Damian de Allende and Lukhanyo Am will again partner up in the midfield.

The Bok coach retained the halfback pairing of Handre Pollard and Jaden Hendrikse in the backline, while regular Bok captain Siya Kolisi reclaims the captaincy in loose trio with Pieter-Steph du Toit (flanker) and Jasper Wiese (No 8).

The other changes up front see Lood de Jager pair up with Etzebeth in the second row, while Nienaber named a new front row of props Trevor Nyakane and Frans Malherbe on either side of Mbonambi, who made his debut off the bench against Ireland in June 2016 and will become the 45th Bok to reach half a century of Test caps.

There were an array of changes among the replacements, which again features a split of six forwards and two backs, with Steven Kitshoff (prop), Franco Mostert, Kwagga Smith (utility forwards), and Elrigh Louw (flanker) featuring alongside scrumhalf Faf de Klerk and fullback Willie le Roux.

While Nienaber was proud of the remarkable career milestones for Etzebeth and Mbonambi, he said the match was significant for the entire team with a Castle Lager Incoming Series victory at stake.

“We are very proud of Eben and Bongi for their achievements, although it would be remiss of us as a team for that to out-shadow the fact that we need to win on Saturday to seal the series against Wales,” said Nienaber.

“Wales have shown over the years and in the last two matches that they are real fighters, and it will require a top-class performance from us on Saturday to register a victory and ultimately clinch the series.

“That said, Eben and Bongi have been true stalwarts to Springbok rugby, and we hope that we can make this a special occasion for them. No-one wants to remember losing their 100th or 50th Test, so we need to do everything we can to win the match.” 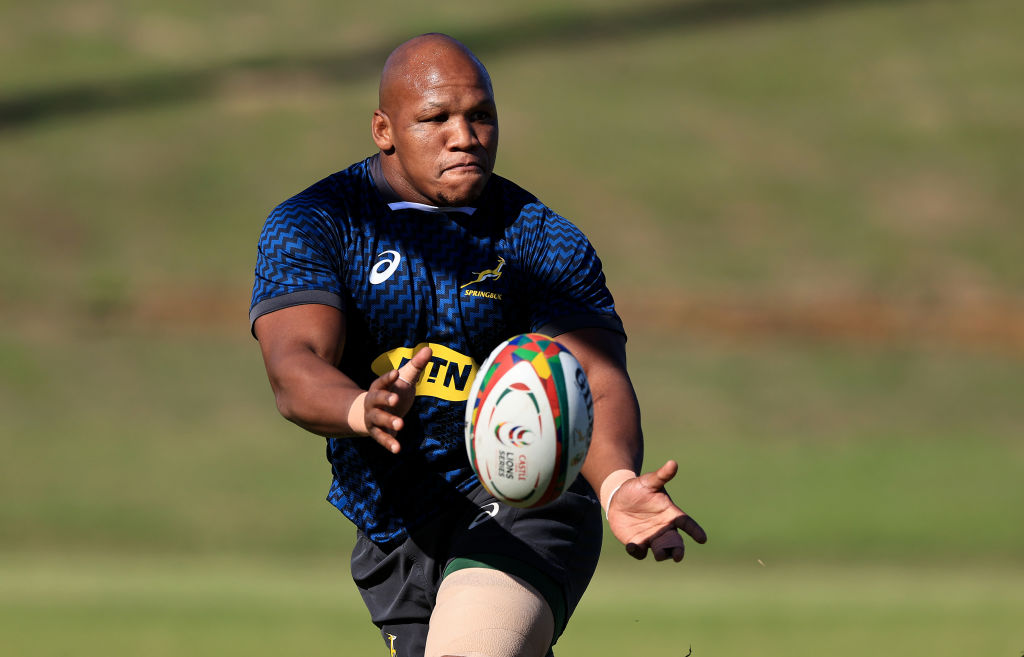 Of his team selection Nienaber said: “We selected a team and player combinations that we think will be the best for this specific game.

“We had an honest discussion with the players telling them what we require from them this weekend and what we would like to see in terms of their performance and hopefully they can produce the goods and we can get the desired result.

“We have high standards as a team, and we would like to maintain that and build momentum with a challenging season lying ahead.”

Nienaber expected another brave effort from Wales and said: “We pointed out from the outset of the series that Wales will be desperate and they showed that in the last two weeks.

“We are expecting another hard grind against them and the fact that they will be playing for their first series victory ever in South Africa will make them even more desperate to push us to the limit this weekend, so we know it will be an epic battle.

“That said, we are also playing in what is essentially a final for us and we know that we need to pitch up on the day and deliver a quality 80-minute performance to emerge victorious.”