Argentina fight back to earn Australia draw in Newcastle

A week after beating the All Blacks, Argentina battled back from 15-6 down to earn a 15-15 draw against Australia in their Tri-Nations encounter in Newcastle.

In a tight and unspectacular encounter, the Wallabies frequently found themselves on the attack – especially in the first half – but could not find a way past a committed Pumas defense.

The Aussies had two tries disallowed during the opening period and in the end, all their points came via the boot of Reece Hodge, who kicked five penalties.

The opening 10 minutes were evenly contested, leaving the sides level at 3-3 after Hodge and Sanchez traded penalties.

The Wallabies had the bulk of the possession over the next 10 minutes and thought they had taken the lead when Jordan Petaia crossed the whitewash after a Hunter Paisami stabbed through a grubber kick. The score was disallowed, however, after television replays revealed that Petaia's foot was on the dead-ball line while dotting down.

Australia continued to hold the upper hand but could not convert their dominance into points. Midway through the half, Tom Banks and Tom Wright combined brilliantly down the right-hand wing but nothing came from the attack after a handling error close to the Pumas' try-line.

And it was Argentina who took the lead courtesy of another Sanchez penalty in the 31st minute when the Wallabies strayed offside on defence. That lead did not last long though as Australia were level five minutes later when Hodge added his second three-pointer off the kicking tee after Sanchez was blown up for foul play.

The closing stages of the half were frantic, with Australia camped deep inside Argentina territory, and they thought they had regained the lead when Marika Koroibete crossed in the left-hand corner only for his effort to be disallowed after the final pass from Banks went forward.

Australia continued to hammer away at the Pumas' line during the half's dying moments but could not breach the South Americans' defence and Wallabies captain Michael Hooper eventually decide to kick at goal. Hodge duly did so and on the stroke of half-time he succeeded with his third penalty to give his team a narrow 9-6 lead at the interval.

Argentina also received a final warning for conceding cynical penalties on defence, and five minutes after the restart Julian Montoya was yellow-carded for another indiscretion, with Hodge slotting the resulting penalty.

Despite being a man down, the Pumas continued to concede penalties and when it was in goal-kicking range Hodge made them pay. In the 56th minute, Bautista Delguy infringed at a breakdown deep inside his 22 and the flyhalf was on target again to put his side up 15-6.

That brought some urgency from Argentina on attack, but even though they spent some time in Australia's 22 during the next five minutes, there was no reward as their handling let them down while camped inside the Wallabies' half.

Shortly afterwards, Sanchez narrowed the gap when he added his third penalty after the Wallabies' forwards were penalised for illegal scrummaging and that score seemed to lift the Pumas' spirits as they mounted a strong finish.

In the 68th minute, Argentina's flyhalf slotted his fourth penalty, which meant they were now just three points down, and three minutes later Koroibete was blown up for accidental offside on the halfway line.

Despite rain pouring down, Sanchez showed his class as he landed that long-range effort which drew his side level once again.

There was drama at the end as Hodge had a chance to win the game for the Wallabies when he lined up a shot at goal in the 79th minute but his effort was wide of the mark and the teams had to settle for the draw. 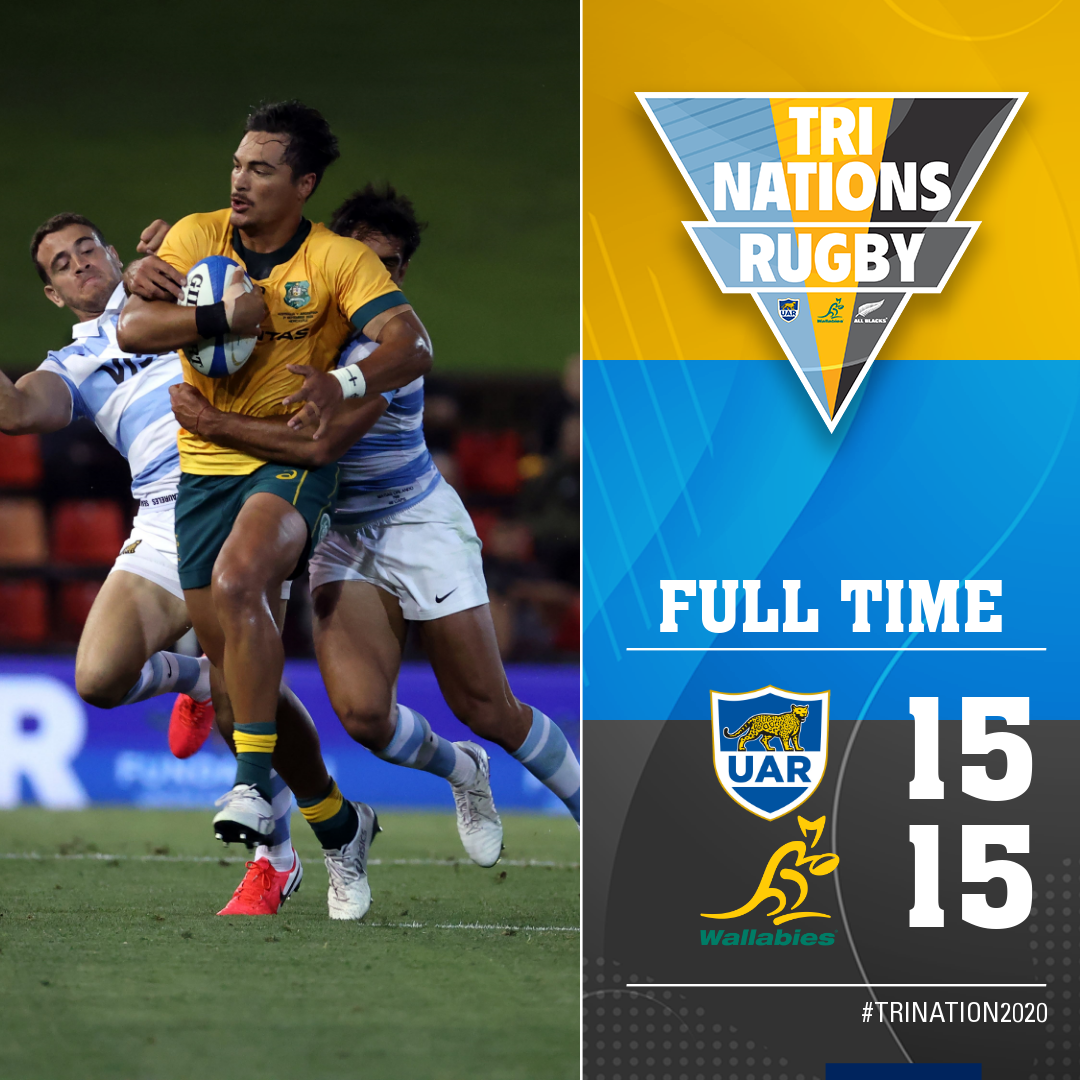