The Wallabies and Pumas had to settle for their second straight draw after their Tri-Nations clash in Sydney on Saturday finished 16-16.

The previous Test between these sides ended in a 15-15 stalemate and it was a similar story in this encounter, much of which was played under a torrential downpour.

In the end, both sides scored a try apiece with Bautista Delguy crossing the whitewash for the Pumas and Michael Hooper dotting down for the Wallabies.

Australia's other points were scored by Reece Hodge via three penalties and a conversion, while Nicolas Sanchez kicked a penalty for Argentina and Domingo Miotti succeeded with two three-pointers and a conversion.

The match was also an ill-disciplined affair, with Australia losing their captain Hooper to a yellow card and Lukhan Salakaia-Loto to a straight red with 20 minutes to go. Argentina, meanwhile, also saw Marcos Kremer and Lucas Paulos sin-binned.

With the two teams sharing the points, New Zealand were crowned Tri-Nations champions after finishing three points clear at the top of the table.

Australia did most of the attacking in the early stages of the match but could not score points despite spending long periods camped in the opposition half.

They did eventually open the scoring in the 15th minute when Argentina's Kremer was yellow-carded for an illegal clear out on James O'Connor. Hodge slotted the resulting penalty, but Sanchez soon restored parity with his three-pointer off the kicking tee in the 18th minute.

With rain pelting down, the next 10 minutes were scrappy, characterised by plenty of kicking for territory and both teams committed several handling errors in the wet.

In the 28th minute, it was the Wallabies' turn to play with 14 men when Hooper was also sent to the sin-bin after he committed a similar foul to Kremer's at the breakdown.

Sanchez was on the receiving end of Hooper's illegal hit and the Pumas flyhalf left the field for a HIA which meant Miotti came on as his replacement, and on the half-hour mark, the rookie pivot gave his team the lead courtesy of a penalty.

The match came alive in the 34th minute when the Pumas launched a lineout drive from inside their 22 and gained 30 metres before Felipe Ezcurra launched an attack from close to the halfway line. He rounded Allan Alaalatoa after selling him a dummy before offloading to Delguy, who saw off the attentions of Hunter Paisami with a strong fend before crossing for the opening try.

That score seemed to stun the Wallabies and they went onto the attack during the closing stages of the half but were kept at bay thanks to a solid defensive effort from the Pumas. Just before half-time, the visitors strayed offside on defence and Hodge added his second penalty as Argentina led 13-6 at the interval.

Ten minutes into the second half, the Wallabies narrowed the gap to four points courtesy of another Hodge penalty after the Pumas were blown up for illegal scrummaging.

However, things went pear-shaped for the hosts on the hour-mark when Salakaia-Loto was sent off for a shoulder hit to the head of a Wallabies player, and Miotti added his second penalty to restore his side's seven-point lead.

Despite that setback, Australia continued to attack and they received a shot in the arm in the 66th minute when Paulos received a yellow card for a professional foul close to his tryline. Soon after, the home side launched a lineout drive from which Hooper barged over for his try. Hodge was on target with the conversion, which meant the sides were deadlocked at 16-16.

That set up a tense finale and with less than a minute to go, the Wallabies had a chance to win the game when they received a penalty from 45 metres out.

But just like in the corresponding Test in Newcastle a fortnight ago, Hodge pushed his kick wide of the mark and the sides had to settle for a share of the spoils. 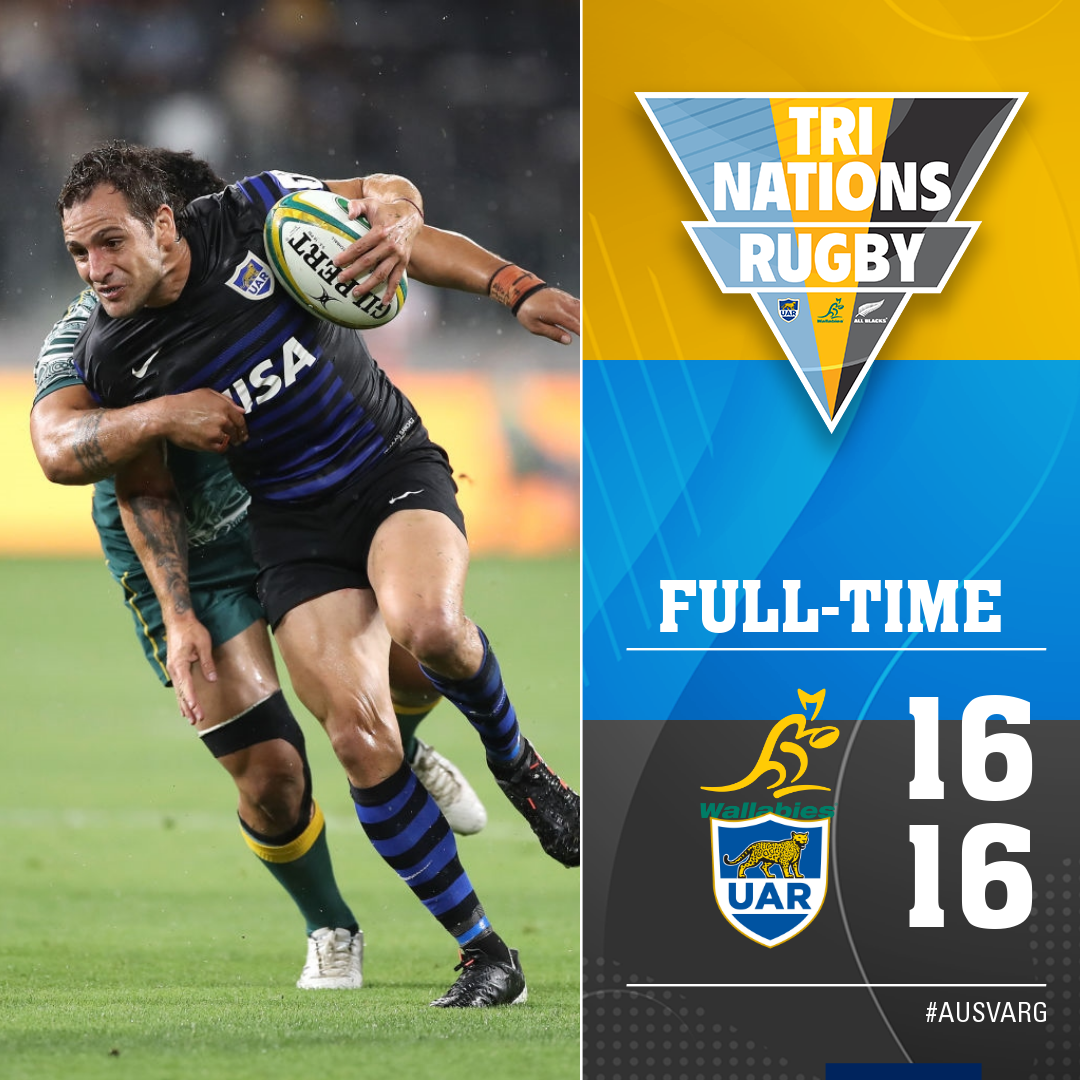