The announcement follows a World Rugby Council meeting overnight, where Council members voted to accept a recommendation from the Rugby World Cup Limited Board to work exclusively with Australia to finalise a hosting model for the 2027 edition of the tournament.

Rugby Australia Chairman Hamish McLennan said: “This is a huge step forward in our ambitions to host Rugby World Cup 2027 and for rebooting the game in Australia.

“Throughout this process, we’ve held the genuine belief the time was right to bring the Rugby World Cup back to our shores.

“The team at Rugby Australia have worked hard on this for a number of years and today’s announcement is great reward for those efforts.

“Firstly, I’d like to thank Sir Rod Eddington, who was the first person I asked to join us on this journey, for his wise counsel, endless energy and good humour.

“I’d also like to thank the Rugby Australia Executive for their leadership, the broader staff at RA and the Bid team including Phil Kearns for their tireless efforts, as well as the ever-committed RA Board for their support. In addition, I must thank the esteemed RWC Bid Advisory Board for their strong stewardship, helpful advice and unwavering support throughout this bid process.

“Through this hard work and thanks to the support of the Federal Government and strong engagement of our State and Territory Governments, we’ve been able to get to a position where we can demonstrate to World Rugby that we’re a safe pair of hands and the obvious choice to host RWC 2027.

“This is a once-in-a-generation opportunity and we’re now closer than ever before to making that dream a reality. Game On for Australia 2027!”

Rugby Australia will now work in an exclusive partnership with World Rugby to further develop the tournament model, ahead of a final World Rugby Council vote in May next year.

Rugby Australia CEO Andy Marinos said: “We welcome the endorsement of World Rugby Council today – we are appreciative of their support for our bid and the trust they have shown in endorsing Australia to move forward with World Rugby on an exclusive basis to finalise the delivery model.

"We now have the opportunity over the coming months to work with our colleagues at World Rugby to develop the optimal model for delivering Rugby World Cup 2027 in a way which will help foster the continued growth of the game not only in Australia, but in our region and globally.

“Today’s announcement is a testament to the incredible work of a lot of people at Rugby Australia over the last three years, since the organisation first set its sights on hosting the tournament again.

“The hosting of the third-biggest global sporting event will not only reposition Australia on the sporting map and deliver a boost to our economy but provide us with an opportunity to showcase once again our magnificent country.

“I’d like to thank Alan Gilpin and the team at World Rugby for the way they have engaged throughout this process to date, it has been a collaborative approach with partnership and the best interests of Rugby at its core.

“We’re conscious there is still much work to do and we certainly won’t be resting on our laurels. We look forward to continuing to work with World Rugby over the coming months to ensure we can deliver a compelling proposition for the Council’s consideration ahead of its final decision in May next year.”

Executive Director of Australia’s Bid, Phil Kearns said: “To the Australian Rugby community and the broader Australian public, thank you for your support and engagement throughout this process to date. Your enthusiasm has helped us show World Rugby just how significant an opportunity there is to be had by bringing RWC back to Australia.” 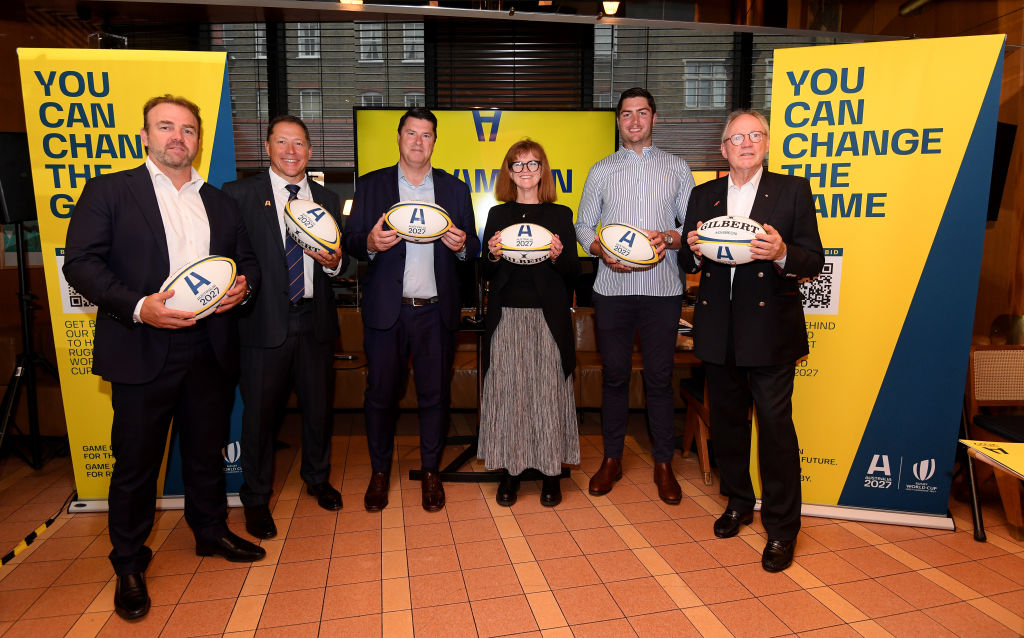 "The Rugby World Cup 2027 would be yet another opportunity to showcase our strength as an international host," Minister Colbeck said.

"It is an exciting and ambitious prospect that will boost Rugby across Australia as well as provide enormous economic benefits to our nation.”

The announcement comes six months after Australia formally launched its bid, which sparked a series of community engagement initiatives across the country, including Classic Wallabies visits at the grassroots level and activity throughout the Wallabies’ domestic schedule.

Rugby World Cup 2027 in Australia is projected to attract more than two million attendees across seven weeks of competition, including 200,000 international visitors, and generate $2.5 billion in direct and indirect expenditure to the economy, while also creating 13,300 FTE jobs and stimulating $500 million in new trade and investment.

Australians and Rugby fans around the globe are encouraged to continue to show their support for Australia to host by signing up at Australia2027.rugby.