Best With Ball In hand?

Defensive patterns have been hard to break in the Tri Nations but which players are the most effective with ball in hand and cause opposition defences problems?

Well positioned offensive rugby has been scarcely seen for Australia and Argentina across the 2020 Tri-Nations campaign, with the competition dominated by defensive battles where mistakes cost games. This weekend, the Wallabies and Pumas will have the opportunity to wrap up the Tri-Nations campaign in style with each side looking to scrape themselves off the bottom of the ladder at the final junction.

Attacking opportunities have been crucial for all three teams during this competition, and capitalising on their presence must continue to be important. Australia’s Tom Wright has stood head and shoulders above the rest of the competition when it comes to making as much impact as possible per carry. Wright has gained 9.9 metres per carry in the 2020 Tri-Nations, 2.6 metres more per carry than any other player to have made at least 10 carries in total throughout the campaign.

New Zealand playmaker Richie Mo’unga [pictured below] ranks second in this category with 7.3 metres gained per carry, having already completed his stint in the competition with the All Blacks. Australia fills out the rest of the top five, with bustling backliners Jordan Petaia, Filipo Daugunu, and Marika Koroibete all having gained 6.4 metres per carry this season. 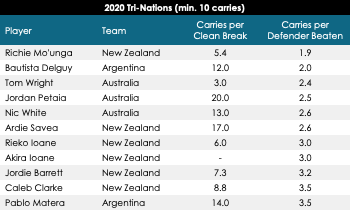 Only one Argentinian has managed to break through the five-metres-per-carry mark among those that have made at least 10 carries this season. Bautista Delguy (Argentina) has gained 5.2 metres per carry – the eighth-most of any player to have made the requisite 10 carries for this category. 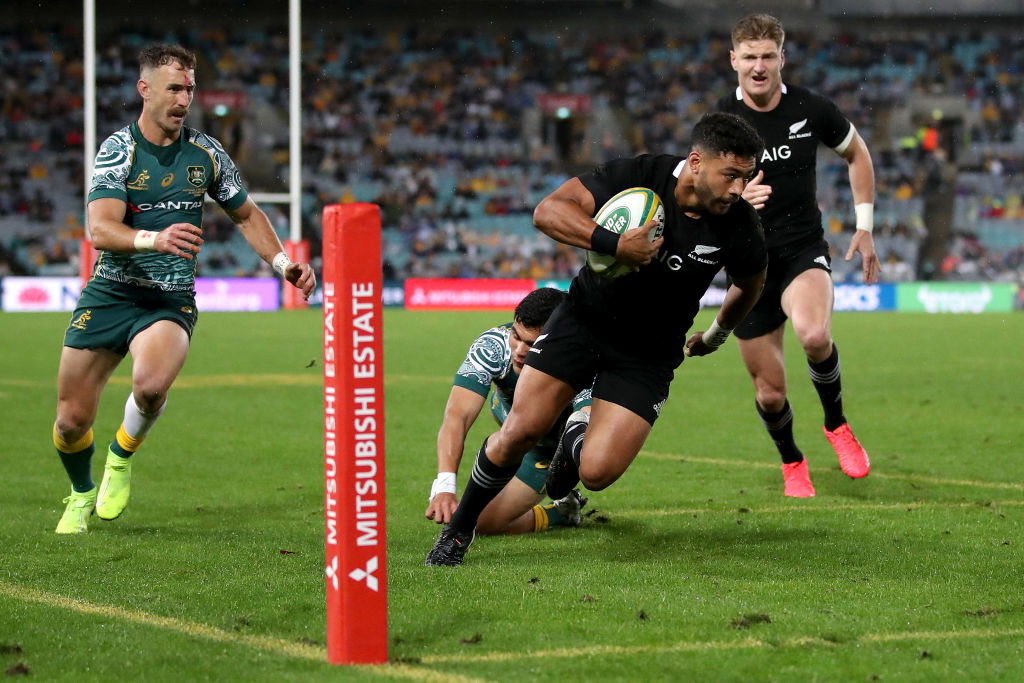 Australia’s Tom Wright has not just gained ground with his forays into the defensive line, but he has also regularly bested the first attempt to stop him. Wright has beaten a defender once every 2.4 carries in the 2020 Tri-Nations, which is the third-most of any player in the competition (min. 10 carries).

Bautista Delguy of the Pumas also features highly at one rank above Wright in second having beaten a defender on one of every two carries he has made in the competition.

The pair and their national teammates will need to make the very most of every opportunity they get in the final game of the 2020 Tri-Nations as they attempt to wrangle their squads off the bottom of the ladder.