Can All Blacks Remain Unbeaten or Will 'Boks Prevail

The All Blacks are seeking a six successive TRC 2021 win and a second consecutive win over the Springboks on the Gold Coast in Queensland.

The All Blacks starting forward pack remains unchanged from the original named last week, with Luke Jacobson returning to the number eight jersey, after his late withdrawal with illness last weekend. Asafo Aumua comes in at reserve hooker and George Bower comes in for Karl Tu’inukuafe on the bench.

In the backs, Brad Weber will start at halfback with TJ Perenara on the bench, Anton Lienert-Brown returns from injury to the 13 jersey, with Rieko Ioane moving to the left wing and Sevu Reece named on the right.  First five-eighth Richie Mo’unga, who re-joined the team this week, is on the reserves bench alongside Damian McKenzie.

All Blacks Head Coach Ian Foster said the team was keen to finish the Fortinet Rugby Championship on a high.

“The energy levels are high in the team, it’s our fifth Test in a row, and we’re highly motivated ahead of another big Test against South Africa and the last Test of the Championship.

“We’ve achieved the Championship title, which we’re really proud to have achieved. The fact that we now have the chance to achieve a potential Grand Slam against our Southern Hemisphere opponents is pretty special. I’m excited by that and it has already given this weekend’s Test an edge."

Foster said the All Blacks were looking for improvement in their game across the board this week.

“We learnt some lessons last week.  We didn’t look after the ball as well as we could have and some of our work at the ruck wasn’t as good as we wanted.  We have to lift our performance in that area and the team is keen to get that right this weekend.” 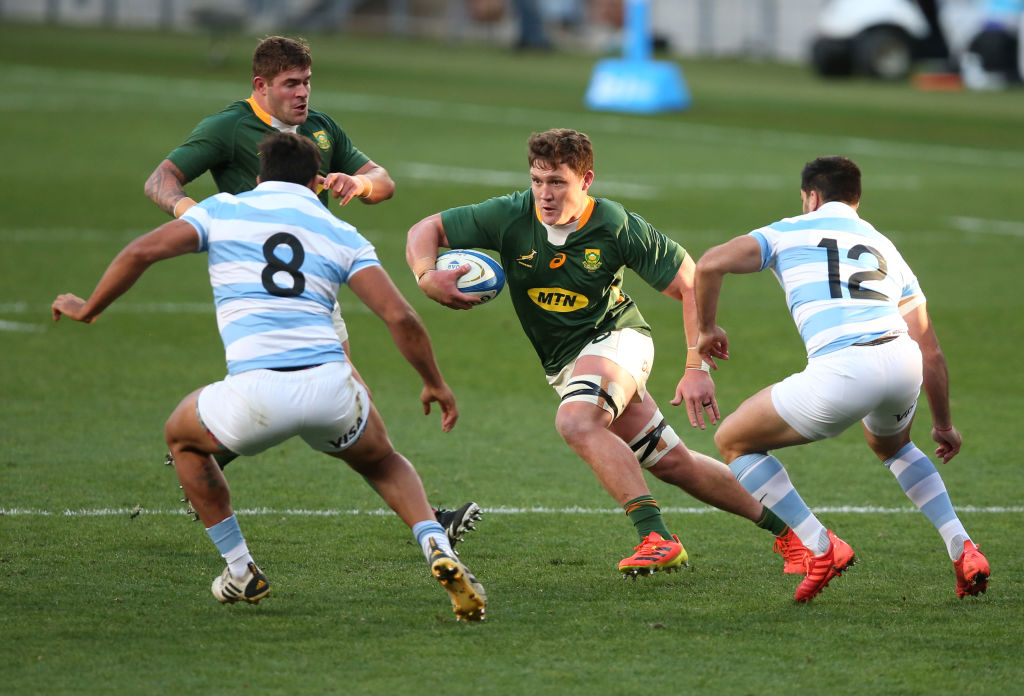 Springbok coach Jacques Nienaber made two injury-enforced changes to his matchday squad for their final Castle Lager Rugby Championship clash against the All Blacks in Gold Coast, with Ox Nché earning a starting berth and Jasper Wiese [pictured above] being drafted in among the replacements.

Nché will start at loosehead prop with Trevor Nyakane switching to tighthead after Frans Malherbe was ruled out of selection due to a neck niggle, while Wiese takes over from Marco van Staden, who suffered a shoulder injury in the latter stages of last week’s 19-17 defeat against the All Blacks in Townsville.

Cheslin Kolbe, who missed the team’s first two matches against the Wallabies and last week’s outing against the All Blacks due to a leg injury, trained with the team on Monday and Tuesday, but he was unable to complete the last training session, which dashed his hopes of making a comeback.

“We made a big step-up in terms of our performance last week and having reviewed the match, there is no doubt we delivered a performance worthy of a victory. With that in mind we opted for continuity in our team, so the only change in the run-on side is Ox taking over in the front row after Frans was ruled out," said Nienaber.

“Trevor is a seasoned campaigner who is equally comfortable at loosehead and tighthead prop, and Ox is a strong scrummager, so we are looking forward to seeing what they can do in the scrums.

“On the bench, Jasper takes over from Marco, and we are fortunate in that they are similar in terms of their physicality and strong ball-carrying abilities.”

Nienaber stressed the importance of turning the corner after three successive defeats on tour and said the entire squad was aligned in terms of what their roles were to steer the team to a much-needed win.

“We are bitterly disappointed about the results in the last few weeks and everyone in our team realises the importance of finishing the Castle Lager Rugby Championship on a winning note,” said Nienaber.

“Every member of squad will have a role to play in ensuring that the players on the field are at their best on match-day, and we have no doubt that if we can build on the strong points of our game last week and improve further on the execution of our game plan, we can get the desired result.

“We know it is going to take a colossal 80-minute effort, but the drive to succeed and motivation to win this weekend is as big as it gets. Last week we stuck to our DNA and style of play, and with a little more luck we could have come away with the result, so we need to ensure that we are better at it this week."

“We are ready for this challenge mentally and physically and we know what we are capable of as a team, so we’ll go out there and give everything we have.”