Cooper snatches victory at the death for Wallabies

Quade Cooper slotted a penalty after the hooter to give the Wallabies a 28-26 victory over the Springboks in Gold Coast, Queensland, on Sunday.

The difference in the end was the goalkicking as Cooper slotted eight from eight, while Pollard missed two penalties and a conversion and Damian Willemse missed a conversion.

The Boks outscored the Wallabies' three tries to one but still came out on the losing side. Bongi Mbonambi and Malcolm Marx (2) got the tries, all from driving mauls. Andrew Kellaway dotted down for the hosts.

It was a fast start to the game as Faf de Klerk found touch eight metres out from the Aussie try line. Folau Fainga'a's throw went over the top of the lineout to the back and the Wallabies were penalised at the ruck right in front of their own poles. Handre Pollard made no mistake to give the Boks a 3-0 lead after just five minutes.

The Wallabies then applied pressure on the Boks as they went a couple of phases before drawing a breakdown penalty from the Boks. Quade Cooper lined it up and slotted the ball between the poles to level the score.

The Boks won a scrum penalty in the 11th minute after the Wallabies' scrum went straight down as Pollard slotted it to restore the lead.

However, parity was once again restored after the visitors were penalised at the breakdown after some rather static and sideways running from the Boks as Cooper dissected the uprights once again.

The Wallabies opened the scoring with a brilliant team try. Kerevi scythed through the Bok defence with a fantastic line and found Andrew Kellaway with a pinpoint long pass and the winger cut inside past two Bok defenders to run in under the posts as Cooper converted for a 13-6 lead.

The Boks responded in the 28th minute. A powerful maul by the world champions drove over the line and Bongi Mbonambi dotted it down as Pollard failed to add the extras.

Cooper added a further two penalties to take the hosts out to a 19-11 lead at the interval after the Boks gave away two silly penalties - first for an offside against Eben Etzebeth and then at a scrum.

Pollard reduced the deficit to five at 19-15 but Willie le Roux was yellow-carded in the 51st minute for a deliberate knockdown. However, despite their numerical disadvantage, the Boks got the five-pointer they needed when the maul could not be stopped once again with Malcolm Marx claiming the honours.

Soon after, Jasper Wiese was penalized for not releasing the ball at the ruck. Cooper lined it up from about 45 metres and slotted the kick.

The Springboks appeared to have completed the turnaround after Marx dotted down for his second at the back of another powerful rolling maul in the 72nd minute. But Willemse crucially missed the kick and the Wallabies won a penalty two minutes after the hooter with Cooper's 35 metre strike dissecting the poles once again to give Wallabies the victory by just a single point. 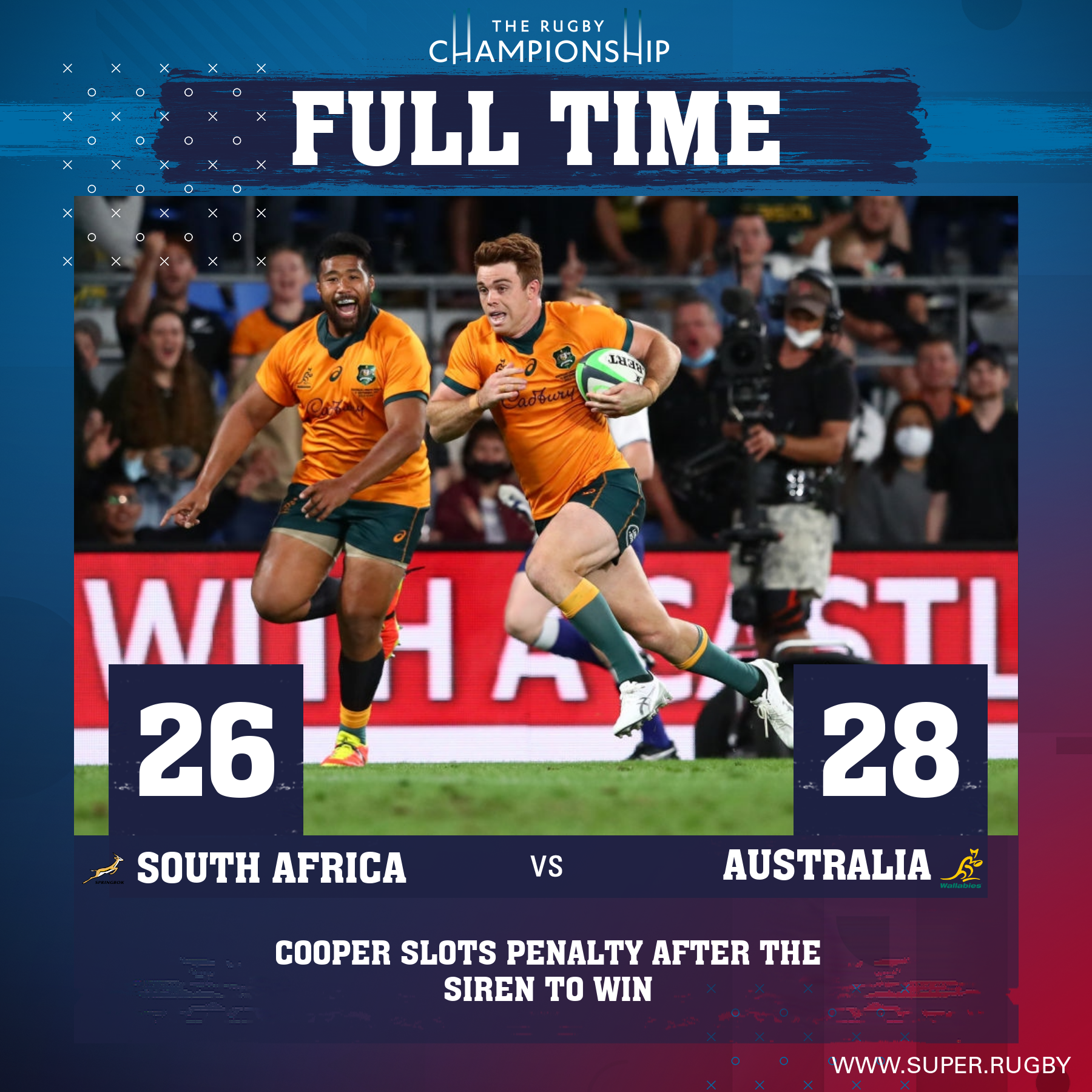