ENGLAND FIGHT BACK TO EARN DRAW AGAINST ALL BLACKS

England scored three late tries to snatch a dramatic 25-all draw with New Zealand at Twickenham.

Feasting off two late All Blacks mistakes allowed England to steal a 25-25 draw in the last nine minutes that produced three home tries to deny New Zealand a win at Twickenham.

Seemingly in control of a penalty-ridden contest at 25-6 with 10 minutes to play, the previously lethargic England found a level of momentum against a 14-man New Zealand team that lost all the defensive intensity that had predicated their earlier control.

Ironically, it came after fullback Beauden Barrett had landed a dropped goal that seemed to ensure victory.

However, England launched an attack with first five-eighths Marcus Smith breaking hard at the line. Beauden Barrett tackled him but did not release. Under advantage England again drove at the line and it was replacement Will Stuart who, after a prolonged TMO check was awarded a try.

But before making that decision, referee Mathieu Reynal sin-binned Barrett for the tackle play.

England ran the ball from the restart and with the ball moving through hands with ease they stretched the previously sound defence and it was fullback Freddie Steward who scored.

With the ball under control, replacement halfback TJ Perenara lobbed a kick over a ruck that gave possession back to England, and they made the most of it by attacking wide again and it was a second try to Stuart.

Frustrating as the draw was, the All Blacks had earlier revealed an ability to play a dominant game in a stop-start affair where referee Reynal blew 28 penalties – 14 each. The forward pack was powerful at scrum time and punished the England scrum throughout.

Reflecting on the game, missed chances earlier will stick in the All Blacks' minds and file this game in the 'one that got away' category.

Unleashing cross-kicks throughout the game, it was in the 49th minute that Beauden Barrett from inside his 22m found Caleb Clarke just in from the right touchline. He secured the ball and then fed centre Rieko Ioane [pictured below] outside him and he raced 80metres to take the All Blacks to a 22-6 lead.

Needing to get back into the game at the start of the second half down 3-17, England landed an early penalty goal and then had a series of attempts to bullock their way over the line but the superior All Blacks' defence denied them and achieved the penalty to clear their line.

The All Blacks started spectacularly by scoring two tries in the first eight minutes via an intercept by flanker Dalton Papali'i off an attempted England lineout play and a 50m run into space and a hooker Codie Taylor try from a rolling maul, the All Blacks dominated the first half.

Had centre Ioane not been denied a try, in the 17th minute, for a neck roll on England second five-eighths Owen Farrell, they would have been out to a 21-0 lead. There were other opportunities as well where handling, rulings for being in front of kickers, not straight lineout throws, were applied by the referee.

England, until the final 10 minutes, was vulnerable all over the ground. When they did keep the ball in hand they mounted wave after wave yet were unable to penetrate the All Blacks' defence. But their perseverance and personnel changes allowed them to find their competitiveness at the end.

Early on the All Blacks also put pressure on inexperienced England halfback Jack van Poortvliet as he attempted to kick from the base of the ruck, and on one occasion No8 Ardie Savea caught him with the ball to open up another attacking chance.

The All Blacks' scrum made an early impression, winning penalties and holding on the England feed while also producing one tremendous upheaval to destroy the home effort.

Behind that was the inefficiency of England's tackling missing 14 first-half tackles to only one by the All Blacks carrying 255 metres to 132 by England. By the end of the game England's running of the ball latterly was reflected in their 500m to 385 by the All Blacks.

The Hillary Shield was retained, but the manner of the draw will ensure an edge to All Black preparations for World Cup year 2023. 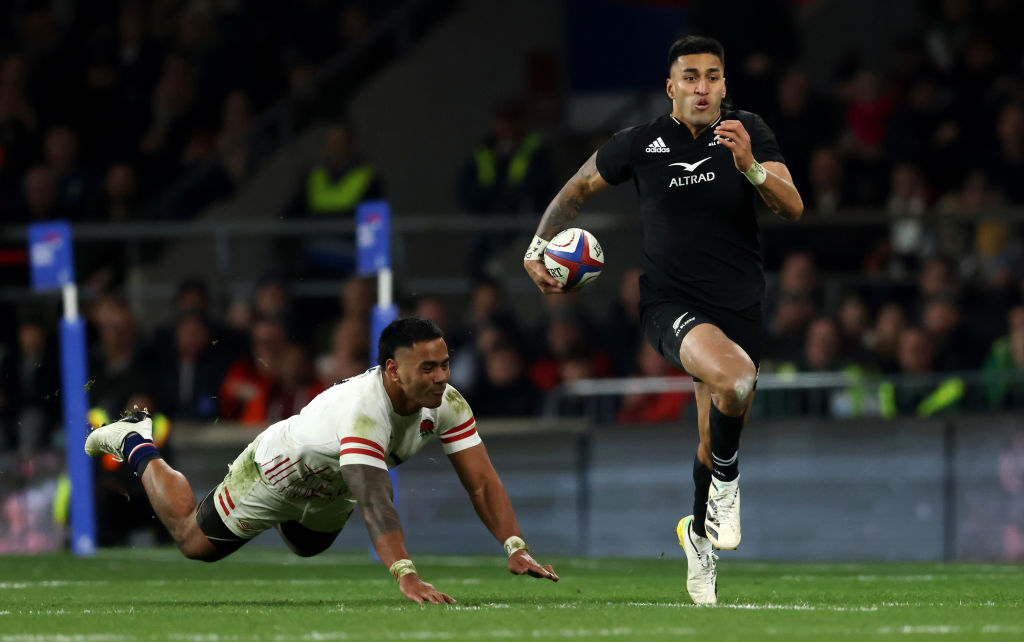