Famous Win For Ireland Over All Blacks

Ireland produced a superb display to secure a monumental and thoroughly deserved victory over New Zealand following a 16-9 triumph at the Aviva Stadium in Dublin.

Denying the All Blacks space to breathe and play their game, Ireland achieved a famous victory with the first home win, 16-9 over tryless New Zealand ending 113 years of anguish at Lansdowne Road in Dublin on Sunday (NZT).

The win was not only historic but in the words of coach Steve Hansen Ireland deserve to be regarded as the No.1 side in the world, notwithstanding the World Rugby rankings. It also saw coach Joe Schmidt claim a second victory over New Zealand after the 2016 win in Chicago.

That will be a massive boost for Ireland heading into the Rugby World Cup next year in Japan while the All Blacks will have time to ponder the way in which several unrelated mistakes built into an uncharacteristic breakdown in the skills factor that has been their key asset.

On the rare occasions the All Blacks did have a chance to run the ball they were forced to kick more often than they would have liked to breach the solid defence, but in most instances Ireland blocked the plays. That the All Blacks couldn't score a try was testament to Ireland's effectiveness.

And as they attempted to run the ball to force a draw in the final moments, in the manner they escaped with an injury time win in 2013, it was symptomatic of the All Blacks' diffidence on the night that it should be lock Brodie Retallick who commited the final mistake a knock-on.

That the All Blacks collectively should make more mistakes than usual was an indication of the pressure the All Blacks were under. Even the old hands, skipper and captain Kieran Read and Retallick, were guilty of handling lapses, while there was an inability to secure Ireland kicks by fullback Damian McKenzie and wing Ben Smith.

Ireland were passionate and played as if they sensed their destiny on the night, well controlled by first five-eighths Johnny Sexton, who was consistently served good ball by replacement halfback for Conor Murray, Kieran Marmion.

Typical of their desire was the desperation play by Irish flanker Peter O'Mahony who helped take the game deep into the final quarter with the All Blacks probing for points. His miracle grab at Barrett's kick ahead beat wing Ben Smith to the grasp and allowed Ireland once again to recover.

Moments later he pulled off yet another superb turnover at a ruck to win a key penalty for his side. It was his last act of the game as exhaustion forced his replacement after an outstanding display.

Not that flanker Ardie Savea lacked anything by comparison in the loose as he was also strong at the breakdown and with the ball in hand.

Ireland dictated the pace throughout and that was rewarded in the 47th minute from a lineout. The ball was won, worked to Sexton who switched it behind to second five-eighths Bundee Aki who carried play back across to the blindside wing where wing Jacob Stockdale chipped ahead into space.

He won the race to the ball and while tackled by halfback Aaron Smith he had the momentum to slide over the line.

Moments earlier Stockdale had tried a similar kick only to have it charged down by Read who had an unoccupied field in front of him with centre Jack Goodhue in support. However, Read was unable to control the ball and the chance was lost.

Ireland swept back onto attack when Retallick dropped the ball, but in contesting the lineout on their own line, the All Blacks cleared back to halfway.

The first half was a battle of the patience of both defences as they each mounted long periods of phase play reaching the high teens before turnovers or penalties resulted in the ball being cleared. The All Blacks struggled under the defensive workload, conceding nine penalties, many of them for offside in the defence line.

Sexton's three penalty goals were all from straight in front of the posts while Barrett landed his first penalty goal from wide out and then added a dropped goal when playing under penalty advantage.

The All Blacks looked to move the ball, especially from Ireland's kicks generally made by Marmion from the base of rucks. But that was frustrated by Irish players getting up to contest kicks and when the ball was cleared the defence proved strong.

New Zealand only managed 35 percent possession in the first half and that was reflected in the tackle statistics which saw them make 108 tackles compared to 74 for Ireland and Ireland dominated the rucks and mauls 88-53. Things did not change in the second half

Flanker Liam Squire was forced from the field with a leg injury after 31 minutes with Scott Barrett playing on the blindside flank. 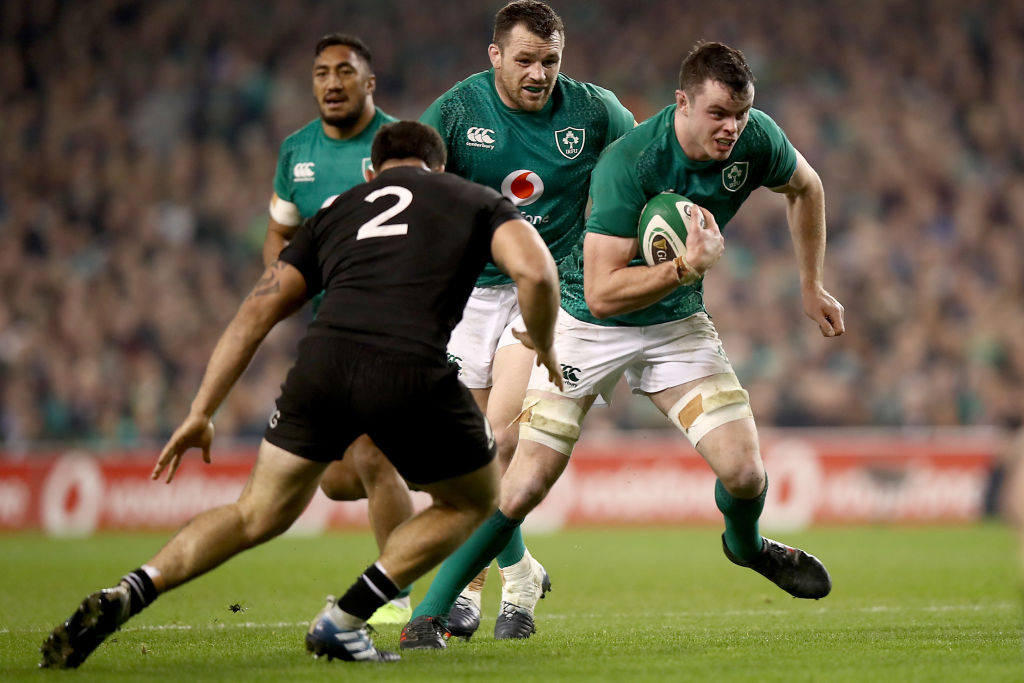